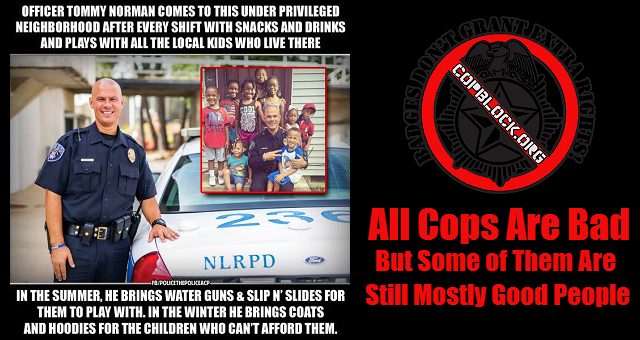 What is a ‘cop’? Is it the person wearing the badge, or is it the all of the circumstances that come with the badge and its position? When I say that ‘all cops are bad’, I am referring only to the position and not the people. Many times the people turn out to be bad, too, but there are also a lot of really excellent human beings whose intentions and character are otherwise honorable.

I have a cousin who is a cop. He is a good guy. He is a well intended man who grew up from one of the sweetest kids I ever knew. This is why it confounds me that he would squander all of his goodness on an institution that is not nearly up to his own personal standards and codes of conduct.

I once dated a woman whose father had just retired from a career of policing. He was a wonderful person who showed me and everyone else kindness, compassion and understanding. He donated money and time to numerous charities and became a mentor to lots of young men in need of guidance. I enjoyed spending time with him and had a lot of great fishing trips I will never forget. His goodness as a human being is unquestionable. Yet this does not negate the fact that, because he was blind to the true nature of the system of policing, he contributed to an institution that degraded the very lives and community that he otherwise tried to improve.

I have met other great people who worked in policing. I have also met some very shitty ones. I saw the kids that got picked on in high school grow up and adopt the badge as a shield of misguided vengeance. I saw the bullies and mindless sportsball meatheads enter that career as a way of extending the shelf life of their adolescent violence and cruelties. These people are not bad cops because they are bad people. They are bad cops as well as bad people. Not only is their profession and position rotten to the core, their personal ethics, values and morals are unscrupulous.

Lets try this with basic logic.

If I said that all oranges are inedible because some oranges are inedible, that would be a logical error. It is the same logical error that you make when you assume that police critics think that all of the people playing the cop role are bad people. That is illogical and misrepresents our position. We simply recognize all oranges are orange. Their edibility is not measured merely by the fact of their orangeness, but by the fact of their edibility, which is a separate measure of their properties than being orange.

That the responses to this article will still claim that I think all oranges are inedible is disheartening and revealing. It illustrates that police support relies so heavily on ignorance and irrationality. At the same time it makes me secretly wish for a plague that targets only stupid people. Authority is a device aimed at the lowest common denominator, which then must also create more of it to grow, and which drags the rest of civilization down to that level. Human advancement has been retarded for too long by aggressive institutions which aim to control and console the bottom of the human barrel, insuring there is always going to be a bottom to feed upon. And this is also the reason why we have recently been sharing content aimed at addressing reason and human intelligence. The two works, police/state abolition and saving humanity from becoming a total Idiocracy, go hand in hand. They rely on each other to be successful. Let us take the LEO in this picture as an example. If we take it at face value that this man, in his off-duty hours, spends his time and resources helping out members of his community who are in need, then we can conclude that (so long as he is not secretly a serial rapist or something) he is indeed a wonderful individual human being. He is an edible orange. And at the same time he contributes to an institution which enforces bad laws that ruin the lives people who have never hurt another person. Every day lives are lost or ruined by our legal system, and police are the ones out on the street making it possible. Without police, politicians and judges and prosecutors are nothing. Police are what separate citizens from the ruling elite. Police are the ones holding the whips to keep us from overthrowing our masters. Police are the crux of authoritarianism under which all individuals suffer, including the people who play the roles of the police and the ruling elite. It is a system of ideas, bad ideas, that traps humanity and binds us to our past and to the lowest common denominator.

I wish to rescue men like this from the trap, as well as myself and the rest of us. Their dedication and passion to humanity is too important and necessary to be squandered on policing. Until we rid ourselves of that evil institution, we tie the hands of our community in finding better and more constructive ways to employ the talents and humanity of folks like him. Of people like my cousin and my ex-girlfriends father. These individuals are imprisoned by a lie that says policing is a place for good people to shine. It is not. It snuffs out every flame they light in their community by adding the duress of policing. Being a good person and a cop is like taking one step forward and two steps back. In order for humanity to begin walking forward we must abolish the police and stop making bad cops out of good individuals.