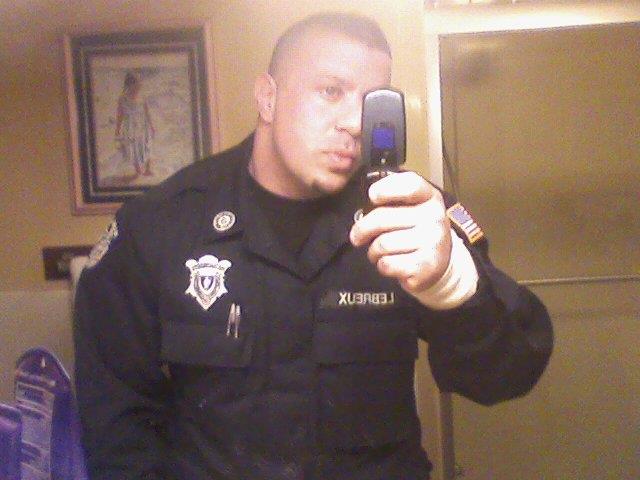 STEPHEN LEBREUX, 40, of Swansea, a corrections officer at MCI-Bridgewater, was arrested in Somerset late this afternoon and charged with trafficking heroin after a several week-long investigation by the Massachusetts State Police Gang Unit with assistance from the FBI. An undercover state trooper made multiple heroin buys from LEBREUX while he was off-duty and not at the prison.
The suspect was arrested shortly after 4 pm after State Police set up another undercover purchase. When he arrived for the sale he was taken into custody.  The suspect is being held at the MSP Dartmouth Barrack for arraignment at Fall River District Court in the morning. No further information is being released at this time.

Officer Lebreux is scheduled to be arraigned in District Court on Wednesday (2/17/2016). You may leave him some well-wishes here at Officer Lebreux’s Facebook page. You can view the State Police’s press release here.

When I write an article for any police accountability website, I try my best to present the facts and then give my opinion on the subject at hand. For some, this hasn’t been very clear, so I thought I would ‘mix it up a little’ and break this article down between facts and opinion. The facts of the case can’t be argued. It’s word-for-word what the Mass. State Police released today (though I’m sure the CopSuckers will still argue I twisted the words somehow).

Officer Stephen Lebreux is yet another example of double-standards in the police community. (The only difference between him an other police officers that routinely break the law, is that he was arrested). I can’t help but to ask why the officer believed it was okay for him to traffic drugs ‘off-duty’, and then go to work where he watched over prisoners, many of which are under his ‘care’ because they violated one of the thousands of anti-drug laws in our nation. I can only assume that he thought that he was above the law. What else would explain his utter contempt for the laws that he swore an oath to?

Let’s hope the jury eventually convicts Officer Stephen Lebreux – not because of the drug charges, but because he took advantage of the public’s trust. Police officers across the nation should rally in support of the prosecution. The police union should turn their back on the now disgraced officer and prove once and for all that they stand for justice and not the ‘good ol boy’ system.