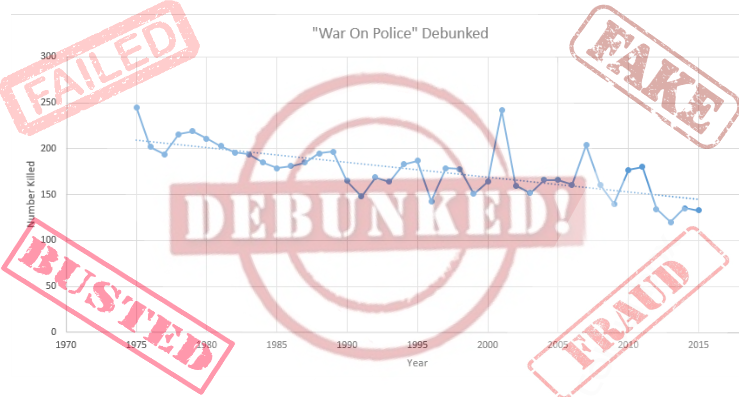 Last year, Officer Down Memorial Page listed 133 police officers as ‘Line of Duty Deaths’. Besides listing those officers intentionally killed by another person, they list accidental deaths, falls, natural disasters, and a whole host of other scenarios to artificially inflate the numbers to perpetuate the debunked ‘ war on cops ’ propaganda.

If you only look at those officers who died IN the line of duty and not ON duty, the number is much smaller – In other words, if you remove the deaths that were not intentionally caused by another human being, the actual number of murdered police officers was less than 100.

(But, to appease the copsuckers, I’ll include even the overweight and/or elderly cops who died on duty from heart attacks, and all the other accidental deaths, and compare those deaths with previous years.)

What’s more disturbing than the mythical ‘war on cops’, is that cops have killed more citizens in a little over two years, than the number of  police officers actually killed (intentionally) in the last 40 years. And for police, the ‘war on citizens’ is just starting to warm up. So far in 2016, police have killed 127 people, compared to 129 people by this time last year.

So what’s the warning I mentioned in the title? A new meme has popped up on social media, trying to ‘fan the flames’ on the debunked war on cops. Police officers around the country, and their copsucking groupies, will use ‘scary statistics’ like this one to reignite the senseless murders committed by police, all in the name of ‘justice’

Why will they do it? A lot of police officers will fall under the label of a narcissist.  Psychologists defines a narcissist as having the following traits:

Read over the traits again, and this time ask yourself this question: Now that police are humiliated after their supposed ‘war on cops’ was proven to be an outright lie, what do you think will happen next?