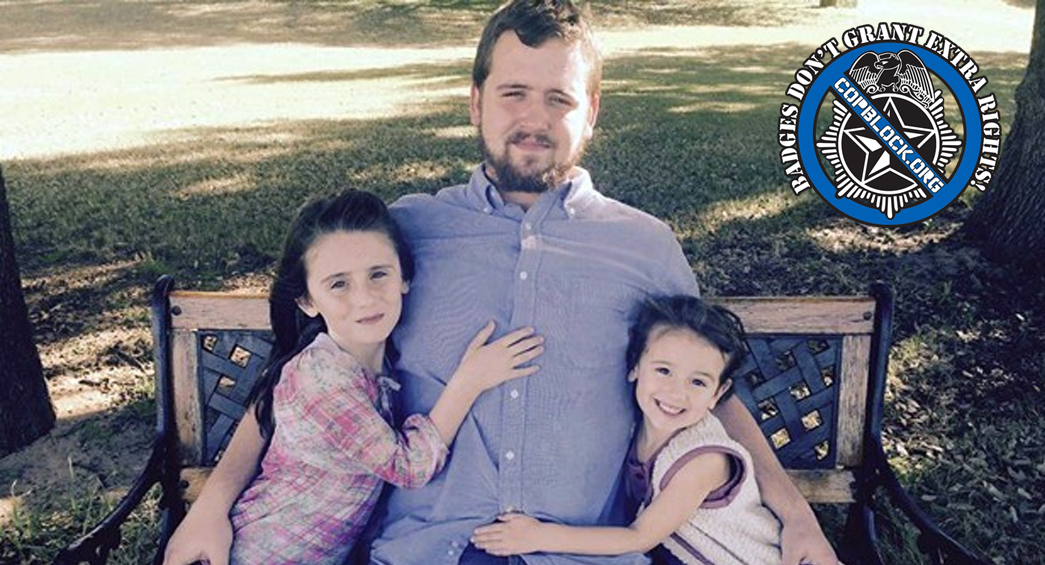 This story was submitted by Matt Taylor Of Carbon County Copblock via the submit tab. Submit your story of police abuse HERE

This is a story all too familiar. A widow is in grieving after the loss of her husband. The Nashville resident is now questioning the circumstances that led police to fatally shoot her unarmed husband at a Phoenix hotel.

Daniel Shaver, a 26-year-old traveling businessman, was fatally shot by a Mesa Police Department officer on Jan. 18 inside a La Quinta Inn, according to family and police.

“All of the details are not clear right now,” Shaver’s wife, Laney Sweet of Granbury, Texas. “Daniel passed away in the hallway of his hotel, unarmed. His friends and family are hurting. We want to know why the officer felt justified to fire his weapon.”

Mesa Police Detective Steve Barry said officers responded at 9:20 p.m. to the hotel at 6530 E. Superstition Blvd. after two guests at the hotel swimming pool reported seeing a person pointing a rifle out of an upstairs hotel room.

Police located the room and ordered its occupants to come out, Barry said. Shaver and a woman exited the room, and police detained the woman without a struggle, Barry said. But investigators say Shaver did not comply with police commands and “He reached” toward his lower back several times, concealing his hands. This is statement is becoming almost unwritten regulation these days.

“Based on the initial report of the suspect having a gun, not complying with commands and reaching behind his body, the officer felt threatened and discharged his weapon, striking the suspect,” Barry said.

Emergency personnel responded and pronounced Shaver dead at the scene.

No weapons were recovered from Shaver’s body, Detectives did locate two pellet guns inside the room, which investigators determined were related to Shaver’s pest control job, Barry said.

The officer who fatally shot Shaver — a two-and-a-half year veteran with the Mesa police — was administratively reassigned per department protocol, Barry said.

As of Monday, the case remained under investigation as evidence and statements were being completed to be presented to the Maricopa County Attorney’s Office for an independent review. We can all be sure justice will be served as police investigate this all on their own, right?

As of Monday the body cam footage is being tightly guarded and has been sent to the independent investigation review board.

Mrs. Sweet has since hired an attorney to obtain police reports, body camera footage and any other pertinent information in connection to the fatal shooting in hopes to discover what really cost her husband his life.

Before his death, Shaver had been living in Texas with his wife and their two daughters for nearly seven years.

Shaver’s wife said she spoke with her husband by phone just before he was shot. She said he works in pest removal and that he had traveled to Mesa, Arizona for work.

“He makes this trip two to three times a month to visit pest removal stores there,” she said. “He carries his work equipment, including two pellet guns, with him on every single trip.”

She said that before the shooting, her husband had dinner with two people at a local restaurant. They returned to the hotel and went to his room together, she said.

“Whether Daniel was the one holding it or he allowed the other man to view his equipment and look into the scope, we don’t know,” his wife said. “The man left the room at some point, for what we think was a trip to the gas station. Shortly after, three police arrived to his hotel room where Daniel and the woman came to the door. … We were told that Daniel was not aggressive, but that he failed to listen when instructed to not put his hands behind his back.”

“I want to hear the 911 calls and see what footage is on the body cameras,” she said. “My kids deserve answers to make as much peace as possible with a horrible tragic situation. We want to know why my husband is dead.”

The family has set up a Go Fund me that has raise over $18,000. If you would also like to show support, the link is here. https://www.gofundme.com/danielmemorialfund