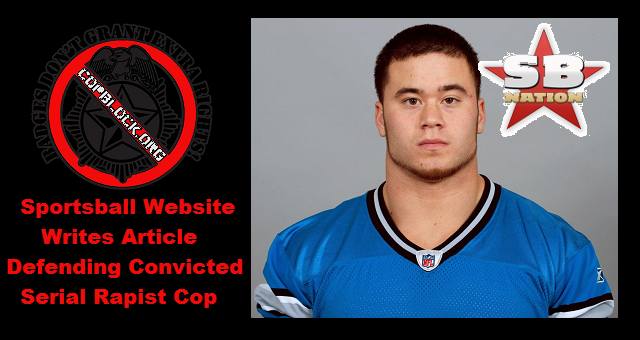 In my last article I wrote the following line:

I saw the bullies and mindless sportsball meatheads enter [policing] as a way of extending the shelf life of their adolescent violence and cruelties.

I also recently shared another writers football ref/cop parable and commented on how sportsball games contribute to our misguided loyalties and collective ignorance. So I was not overly surprised when I discovered today that a popular sportsball website published a highly empathetic piece on former sportsballer turned (now former) cop and then convicted serial rapist, Daniel Holtzclaw.

That article, which appeared at SB Nation, was immediately met with criticism and outrage. The website pulled the article, but it had already been cached by Google and copied be several readers. Within hours other media outlets had picked up on this and began publishing articles critical of article, its author and the website that initially published it. This one by Slate highlights some of the most grotesque parts of that article. I will share a few portions below.

In Bates’ view, Holtzclaw was swept up in the furor over treatment of black Americans by police officers in other places, turmoil that had already resulted the #BlackLivesMatter movement and sparked riots in places like Ferguson, Missouri, and Baltimore, a brewing perfect storm that was only getting worse.

“The emotions were already there and all (the public) needed was a poster child and Daniel came along at the absolute worst time for Daniel,” Bates said. “And he was done.”

Yeah, it was all of those people angry about police killings that were responsible for Daniel’s downfall, not all of that raping he did.

His football career ended at Eastern Michigan, in Ypsilanti. Less than one year after starring in the MAC, he was a former college football player, accent on “former.”

If anything caused Holtzclaw to become unhinged, that may, in part, be what did. For the first time in his life, he had failed and the goal he had long sought was no longer available. For the first time, his strength and will had not been enough. Without an NFL dream to aspire to, perhaps he felt that his sacrifices had been for nothing. As a football player, he had believed he was in charge of his own destiny, now he was stripped of his power.

Or maybe it was the NFL’s fault for not fulfilling his dream to sportsball professionally.

Scientists at Boston University determined, according to the HBO report, that lesions in the anterior temporal lobe of many former players’ brains have been impacted by the constant head trauma. In the report, Dr. Ann McKee, told HBO that when damaged, that part of brain, which controls emotions and self-control, can lead to bouts of anger and aggression. The potential connection in Holtzclaw’s case is intriguing, but hardly certain, and without testing, there is no real way to determine if Holtzclaw is affected, or, even if he is, if that may have played a role in his crimes.

Oh, well I guess he is just a victim of sportsballing, and we should forgive and forget.

This helps to solidify my theory that team sports are conditioning us to baleful apathy and dumbing us down. Only through sportsball mentality and media could something like this rape apologism even come to exist. Nobody else would have though twice about publishing something so horribly awful.

Yet before we spend too much time praising the news outlets like Slate or HuffPost for calling out this obvious violation of human decency and reason, we should examine the role they play in all of this. The mainstream media refuse to diverge from the accountability narrative of police. In doing so they are not only beating their heads meaninglessly against a wall, they are helping to exacerbate the problem. Accountability is not possible and it is an attack that they can easily bear. Accountability silently validates the existence of the system, pretending that a monopoly of force on violence by a select group of enforcers could ever be anything reasonable.

The Daniel Holtzclaws of the world do the raping and the murdering. But it is all made possible by the silence and consent of the mainstream media, who continue to appeal to a middle ground to increase their profits, profits that come from cowardly and hypocritically propping up the system that they only opportunistically critique when it is good for profits. I have worked hard to spread the abolition message to my fellow contributors, and it is beginning to pay off. As you see more of our articles suggesting that we do the only sensible thing and abolish the police, it is unlikely we will experience a spike in popularity. I anticipate exactly the opposite. We are not committed, like mainstream media and the police state itself, to mindlessly catering to the least common denominator so we can compulsively grow. We are committed to a future of humanity where voluntary peaceful interactions and cooperation replace the barbaric violence of police and the state.