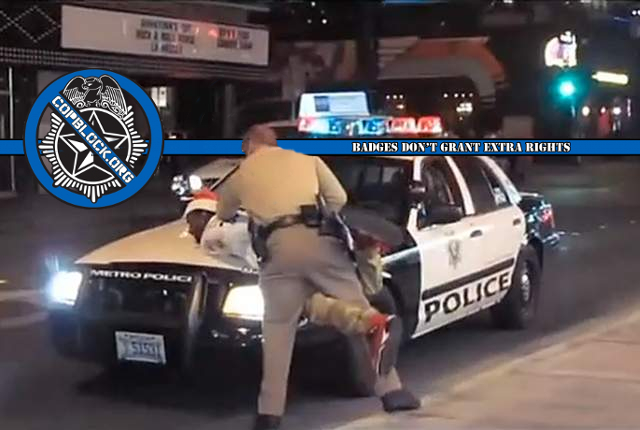 Until yesterday one of the things we always had to caution people about while filming the cops here in Las Vegas was that they shouldn’t talk to the person who has been stopped. The natural inclination when you see the police violating someone’s rights and/or them surrendering those rights because they aren’t aware of them is to make them aware that they don’t have to consent to a search, answer questions, provide ID when not detained, etc.

However, there was a law on the books that stated speaking to police or the person they are potentially trying to kidnap constitutes impeding an investigation and therefore is a misdemeanor crime. Cops who are already not fans of being filmed and oftentimes looking for an excuse to harass or otherwise retaliate against people doing so, have been known to use this as a pretense to arrest Cop Blockers in the past.

However, that’s no longer one of the LVMPD‘s options for a throwaway “contempt of cop” charge. The Nevada Supreme Court in December ruled a similar statute up north in Carson City unconstitutional because it was “overbroad and to vague,” and therefore could be used to arrest pretty much anyone that speaks to a cop while they are performing other duties. As a result, the Las Vegas City Council repealed the Las Vegas version of that law.

The 5-2 decision comes off an appeal in the case of William Allen Scott, who was arrested in February 2014 in Carson City.

Scott was a passenger in a car that was pulled over after a sheriff’s deputy said it ran a stop sign, court records show. The deputy said he smelled alcohol and tried to administer a field sobriety test on the driver.

But Scott interrupted the deputy several times, telling his friend that he didn’t need to do what the deputy said. Scott was arrested, charged and eventually convicted of hindering a sheriff deputy’s duties for his outbursts.

The court said the law Scott was convicted of “criminalizes speech that is protected by the First Amendment of the United States Constitution,” according to court records.

In its decision, the court said the Carson City ordinance gave deputies too much discretion in enforcing the law. The opinion gave an extreme hypothetical example, saying the law allowed deputies who were directing traffic to arrest a pedestrian who simply asked them for directions.

It noted two state laws cover interfering with or resisting a public officer, but don’t allow for the same speech restriction.

Of course, in all likelihood they’ll all just get together and come up with a newer, better written version of the law that allows them to get around the Supreme Court’s ruling and for the Las Vegas Metropolitan Police Department to get back to retaliating against people they don’t like or those who are engaging in legal activities they disagree with in no time.