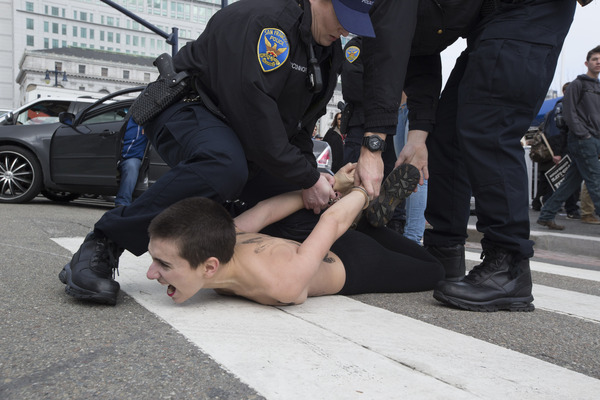 The video above and post below were shared with the CopBlock Network by Chelsea Ducote, via the CopBlock.org Submissions Page. The description within the post derives from a complaint Ducote has filed against the San Francisco Police Department with the Office of Citizen Complaints, a local civilian review board.

Chelsea Ducote’s complaint is based on the treatment she and two other activists involved with “Femen USA” were subjected to during a counter-protest of a San Francisco anti-abortion rally, as well as the false arrests and subsequent unfounded charges that they received afterwards. Femen is a group that is well known, especially in Europe, in recent years for organizing protests involving topless women, often concentrating on anti-religious and feminist issues.

Rebecca Marston, Anni Ma, and I were arrested without probable cause (4th Amendment) and were subjected to false imprisonment for exercising our First Amendment rights by counter protesting the Walk for “Life” West Coast Rally.
An officer used force and pain compliance on me without our circumstances meeting the requirements for use of force listed in DGO 5.01 (F).

The officers and civilians at the protest committed a Bane Act (Civ. Code, § 52.1) violation by interfering with our First Amendment right to Free Speech with threats, coercion, and intimidation. The officers refused to arrest the civilians that assaulted us. We were not told why were arrested or the nature of the charges against us until we were leaving the station approximately an hour and a half later.

In the last five years, there have been numerous acts of vandalism, ten arsons, one bombing, two attempted murders, and three murders at abortion clinics in the U.S. Less than seven years ago, abortion doctor George Tiller was murdered by a pro-life advocate. Women are stalked, harassed, and verbally accosted daily as they try to enter Planned Parenthood clinics, even in the Bay Area. Extremists are allowed to incite hatred and violence against women under the guise of “religious freedom.”

Less than two months after an anti-choice terrorist killed an officer and two civilians outside of the Colorado Springs Planned Parenthood clinic, thousands of people were bussed into San Francisco for the so-called “Walk for Life” to tell women that pregnancy is a life sentence and divergence from that path is a crime.

Myself and two other topless female activists interrupted David Daleiden‘s speech at the rally, shouting “Fraud! Fake! Liar!” and throwing fake subpoenas onstage to highlight the criminal methods used by Daleiden and his pro-life organization to infiltrate and attempt to undermine Planned Parenthood.

As the speakers at Walk for Life spoke of “sacred femininity,” pro-life thugs dragged activist Anni Ma across the ground and another held Rebecca Marston in a choke-hold.

These men carried me over the barricade and towards Officer O’Conner, who immediately used a wrist lock pain compliance technique and barked, “Stop! Stop!” as we continued chanting. She forced me away from the sidewalk and into the street. I yelled out twice that she was hurting me and, after the second cry, she somewhat loosened her grip.

I sat down, and did not resist. However, Officer O’Conner continued to twist my arm and right wrist in a painful, unnatural direction. She and the other officer forced me to lie face-down on the ground as they handcuffed me and bent my legs back in a hog-tie fashion.

I do not understand why this use of force was implemented against me because our circumstances did not meet the requirements to justify the use of force, as listed in DGO 5.01 (F):

We are being charged with misdemeanor park code 4.01(h) for exposing a portion of the “female breast at or below the areola” in a park, yet all of us were arrested on the sidewalk and in the street. As demonstrated from the three hundred photographs and three videos of our protest, none of our “female breasts” crossed into park boundaries. It is legal for both men and women to expose their areolas in San Francisco.

We are also charged with violating pc 415(3), disorderly conduct, for “using offensive words in a public place which are inherently likely to provoke an immediate violent reaction.” We do not fall under that description.

Why should the words “Fraud! Fake! Liar!” incite violence? The violence against us was unjustifiable.

We were exercising our First Amendment rights to Free Speech, and counter-protesting these pro-lifers who gathered to protest a woman’s right to body sovereignty and reproductive healthcare.

If anything, the civilians that assaulted us and the officers that arrested us are in violation of the Bane Act (Calif. Civil Code 52.1) for using violence, threats, coercion, and false imprisonment to interfere with our exercise of our First Amendment rights.

It was not until approximately an hour and a half later at the station, when we were signing our citation slips and being released, that we find out why we had been arrested in the first place.

The officers also refused to arrest the men that assaulted us, despite the fact that we had photographs of them and told officers we’d like to press charges. The anti-abortion rally raged on, and our assailants were still directly upfront near the stage. In this regard, SFPD condoned the violence against women demonstrated and promoted at this rally.

My wrist was sprained for several weeks after our arrest, and I can submit medical bills and photos as evidence. I also had to take on less work because my job requires that I used my hands and wrists extensively all day.