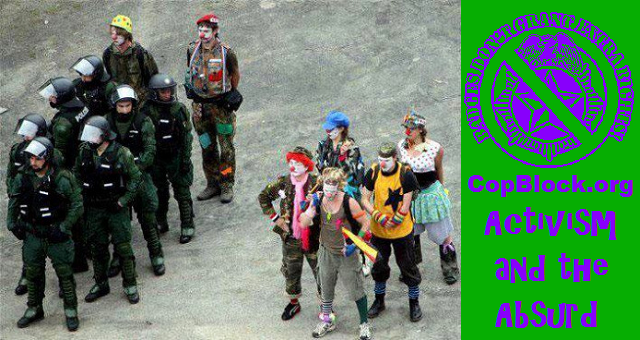 Recently the narrative at CopBlock.org has been evolving towards a message of the futility of accountability and the need to abolish the police. Yet abolishing police requires an ideological movement that does not seem consistent with the kind of activism that happens in the streets. Traditionally protests and filming the police were thought of as actions done to create and demand accountability and reforms. Yet as we discard the myth of fixing the broken system, there is no reason we must throw the baby out with the bathwater.

I still think you should film the police every chance you get. Not to hold them accountable, but to keep them in line and expose them for what they are. The same goes for protests. Take to the streets with a public relations and promotion agenda, not to make demands that will never be satisfactorily met. When we make the news we can redirect the general public to our ideas. This being the case, if seizing the attention of the public and the media is our goal, there is no better way to do this than with bombastic displays of hyperbole and showmanship. This is not a new idea. From the Dadaists and Situationists to the Yippies and Discordians of the past century, protesting through public displays of absurdism has come to be a recognized form of resistance. Even at the end of the 20th century, people protesting the World Trade Organization used bizarre performance art to spread their message, a continuation of a sentiment shared by anarchist/feminist Emma Goldman earlier in the century.

“If I can’t dance, I don’t want to be part of your revolution.”

Today’s world is more saturated with media than at any point in history. So embedded are we in a blitzkrieg of electronic media artifacts, it is almost impossible to break through all of that noise. As CopBlocker Lorelei Freeman has said, it is almost impossible to get momentum behind any story or situation that does not appeal to ‘outrage junkies’. Anybody who works in media can attest to this. If your headlines, bylines and featured image aren’t extreme, they will be lost to the ever-growing onslaught of available information. When you add to this the difficulty small, independent media outlets experience trying to compete against mainstream status quo media, it at times seems futile.

This futility is something many of us have been experiencing personally lately. The endless time, resources and dedication we pour into our causes pays back very little in any way. If these were our jobs it would be the equivalent of working 80 hour weeks for a quarter of the minimum wage. It is also impossible to feel satisfied, or like you are making a difference. This is part of why we realize the need to stop fixating on accountability and redirect our efforts towards abolishment. There is no use trying to meet people halfway when those people show no initiative or gratitude of their own. It is essential that we inject some passion and pleasure back into our message and work, so as not to be bogged down by the apathetic complainers and bloodthirsty outrage junkies that walk in the fair weather of our shadows.

We feel that we can re-energize our movement, soften the transition to the abolition message and have loads of fun by taking full advantage of absurdism in our activism. While many have held it against us that we claim to be accountability activists who sometimes act too extreme, we plan to act with even more wreckless abandon with the knowledge that accountability is futile and it is time to abolish police and the state and move on to better things. Let the absurdity begin!

Ademo Freeman, a founding member of CopBlock, is no stranger to this. He has been employing extremes and absurdity in his activism for years. Likewise, Deo Odelecki and Pete Eyre have joined him in such displays of bombastic activism. For my part, I have used absurdity in the written word through satire in order to appeal to a greater audience and get our message across. We have now reignited interest in using these methods and begun brainstorming some ideas. Join us on the CopBlock Network Facebook Page to help us brainstorm ideas, or submit them in written article form, video or other media here.

Costumes. Whether you put on the clown suit and makeup or go out filming cops in full drag, costumes can be a simple yet effective way to turn a mundane night into one full of wackiness with much greater media appeal.

Performance. Create a message of protest wrapped in zany aesthetics. Comedy routines acted out in public, or oddball marching bands, or a mime routine can all attract more people to what you are doing, making it possible to share your message with them. People are much more amenable to pranksters and performers than angry activists on a street side soapbox.

Sex. Sex sells. Use this to your advantage. A little bit of self-objectification never hurt anyone, so long as it is done in the right spirit. Dress skimpy and incorporate beauty and sexuality into your events. A shirtless hunk or bikini clad babe dancing joyously can draw far more of an audience than sterile, prudish figures who are taking themselves too seriously.

Humor. Laughter is always the best medicine. You can wrap the most unpopular truths and messages in humor and make them a thousandfold more digestible to the public. And you can inject humor in countless creative ways. Those who laugh with you are more likely to become your allies.

Truth. As they say, it is often stranger than fiction. Absurdism does not need to ignore or avoid truth. It can swallow it and spit it back out at much higher levels of concentration. Take the smallest truths and inflate them, and the largest and reduce them. And take any truths that the enemies of freedom and liberty hold dear and mock them relentlessly until they have become too unbearable to repeat by those who held them.

There are no limits to the use of absurdity in activism. I have not even begun to scratch the surface with this article. The suggestions above are a starting point and not the final word. Before I am through making strange suggestions, however, let me share one that I came up with today.

Do you remember the 80’s hair metal band Warrant? How could anyone forget. Now imagine that you and some friends were to dress up as that band circa 1988, resplendent in big hair, bright colors, flowing scarves and spandex sheen, and then went out to interact with police in public while filming the entire thing.

“Nevermind us, officer. We are just here to make sure you don’t perform any Warrant-less searches tonight.”

Play the parts. Ham it up. Use the opportunity to talk to the public and attract media attention. I cannot tell you how much I would love to see this done. I would likely crap myself in laughter.

So now it’s your turn to come up with ideas. Share them in the ways presented above or hoard them for yourselves. Next week we will be starting a contest for the craziest and most absurd CopBlocking video in which you can win cash, CopBlock gear and a chance to go film police with Ademo and the MAC Crew later this year. Stay tuned to find out how to enter and win our Punk the Pigs CopBlocking Contest!