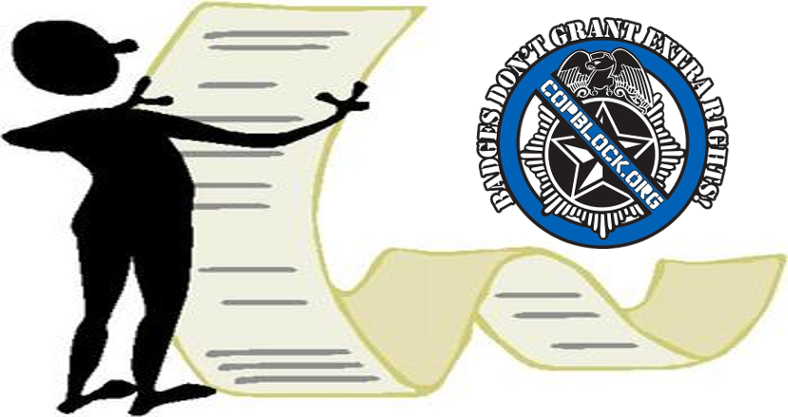 There are probably better or more extreme examples of “government” Tyranny than merely being labeled an “enemy combatant'” or placed on “a no fly list” or considered a “domestic terrorist.” But what could be a better example of pure Dictatorial, Autocratic, Thuggery than some random Pig, “Bureaucrat” or “Judge”, unilaterally choosing to deny one a “Concealed Firearms Permit?” (Derrick J. Freeman). Or perhaps one might be the victim of a decree that make’s one suffer the indignity of being followed around by “federal marshal’s” as one goes about making his living? It happened to Augustus Invictus. (Mr. Invictus is an Attorney. The FBI/DHS decided to consider him a threat—for whatever reason—they now require him to be “escorted” at all times in court buildings.) The point is, he did nothing. He never was, or has been, charged with a crime.

A “list” is just a list—but a “list” with associated and actual consequences? Now, that isn’t just, not “very nice,” it’s how one end’s up with the Salem Witch Trials, the Spanish Inquisition, the Japanese-American “Internment Camps” or the Holocaust.

Now, if a Statist were here, it would be about time for the Statist to throw in some baseless assertions and pretend that we should agree with his/her paranoid fantasies about the “inevitable” calamity of “terrorists” and “rampant crime in the streets” that come along with NOT living in a police state. They might even bring up the possibility of the Stay-Puft Marshmallow man trying trying to climb the side of a building in New York City at 55, Central Park, West.

“Without Cops and Laws we’d have murder and rapes in the street by this time tomorrow! If you hate cops so much—call a crack-head next time you get robbed.”

If the Statist is one of the elders of their tribe, they might even call me a “Utopian.” They might also suggest I should move to Somalia…

But the truth is, I don’t generally need to call anyone. I go about my daily life “heavy.” I live a life of situational awareness. I have fire extinguishers. I keep a little extra food around. I try to have a supply of emergency water on hand. (Bad comes to worse, I also know how to take water out of the nearby “Sugar River” and I figured out how to boil water when I was a younger man.) I can hunt. I can butcher an animal. And I have friends and family that have a thumb greener than mine, who can grow us some vegetables. I also know how to peacefully barter and trade with my fellow man. So I’d just assume not be labeled naive. Utopian? Statists calling an Anarchist, Utopian? That’s going to take me a few minutes to try wrap my head around, I’ll admit.

I strongly suspect Statist boot-licking behavior and ideology is deeply rooted in their realization that they are willfully and almost whole fully incapable of taking care of themselves during any sort of emergency and resent those of us that prefer the animating contest of liberty to the tranquility of servitude. And the truly sick part of this joke is that not even fifteen years ago, they were given a perfect example, that the “State” won’t be there to help them, if the time ever comes, in the form of Hurricane Katrina. I will concede that I don’t know exactly what I’m going to do if the Stay-Puft Marshmallow man get’s uppity. On that day I might have to break down and call the Ghostbusters.

As I said before, this kind of ideology/behavior is how one end’s up with the Salem Witch Trials, the Spanish Inquisition, the Japanese- American internment camps and the motherfucking, Holocaust.

Over the last couple of years it has come to my attention that the average Anarchist has far more Respect for “The Bill of Rights,” and “Due Process” than the average “Statist” and generally, a better plan for survival on this earth. Yet, we are considered “The Unreasonable.” “The Troublemaker’s.” We are called “violent and extreme.” I ask you this: did we “Anarchists” kill two hundred million people over the last hundred and fifty years or was that the Statists and their beloved “Governments?”

Either I’m getting dim—or the Statists have REALLY and finally drank so much of the cool-aide that they can’t read the writing on the “see something, say something” (if you are innocent, you have nothing to worry about) sign, right in front of their faces.

Considering that Statists won’t read this, rather “allies,” actual or merely purported, I offer you this; if you wonder why we Anarchists (at least the one’s not advocating for Bernie Sanders and Donald Trump) are so hesitant to come on board with Min-Anarchists, Constitutionalists and Libertarians it is simply because: “whether the Constitution really be one thing, or another, this much is certain—that it—The Constitution, has either authorized such a government as we have had, or has been powerless to prevent it. In either case it is unfit to exist.”—Lysander Spooner

(It also doesn’t help how quick a certain segment of you are to go out of your way to point out the occasional cop who isn’t acting like a murderous, cretin. Or the politician that pretends like he isn’t Mussolini’s cousin. In case you haven’t noticed—the “masses” ALREADY like the police—or at least think they should support them and the general populace already think “voting can make a difference.” The way to accomplish Revolution isn’t to try to calm down the radicals. And it make’s some of us wonder about your true intentions.)

In conclusion; when an “accusation,” is treated as a “conviction”, when a “reputation,” sans evidence, “justifies” a reprisal—Tyranny, Rape, Murder, in other words, resolute Barbarism, is the only possible result.