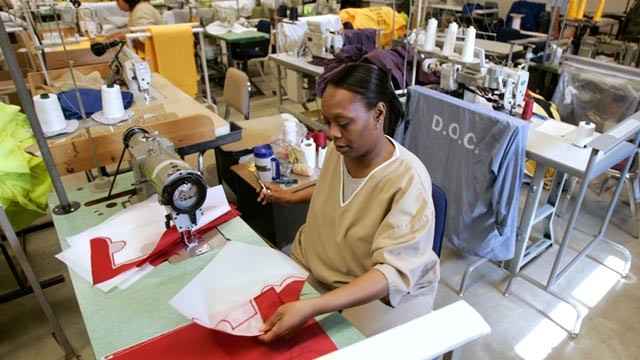 This article was originally published at USuncut.com by Kelley Davidson

Once slavery was abolished in 1865, manufacturers scrambled to find other sources of cheap labor—and because the 13th amendment banned slavery (except as punishment for crimes), they didn’t have to look too far. Prisons and big businesses have now been exploiting this loophole in the 13th amendment for over a century.

“Insourcing,” as prison labor is often called, is an even cheaper alternative to outsourcing. Instead of sending labor over to China or Bangladesh, manufacturers have chosen to forcibly employ the 2.4 million incarcerated people in the United States. Chances are high that if a product you’re holding says it is “American Made,” it was made in an American prison.

On average, prisoners work 8 hours a day, but they have no union representation and make between .23 and $1.15 per hour, over 6 times less than federal minimum wage. These low wages combined with increasing communication and commissary costs mean that inmates are often released from correctional facilities with more debt than they had on their arrival. Meanwhile, big businesses receive tax credits for employing these inmates in excess of millions of dollars a year.

While almost every business in America uses some form of prison labor to produce their goods, here are just a few of the companies who are helping prisoners pay off their debt to society, so to speak.

From dentures to shower curtains to pill bottles, almost everything you can imagine is being made in American prisons. Also implicit in the past and present use of prison labor are Microsoft, Nike, Nintendo, Honda, Pfizer, Saks Fifth Avenue, JCPenney, Macy’s, Starbucks, and more. For an even more detailed list of businesses that use prison labor, visit buycott.com, but the real guilty party here is the United States government. UNICOR, the corporation created and owned by the federal government to oversee penal labor, sets the condition and wage standards for working inmates.

One of the highest-paying prison jobs in the country? Sewing American flags for the state police.