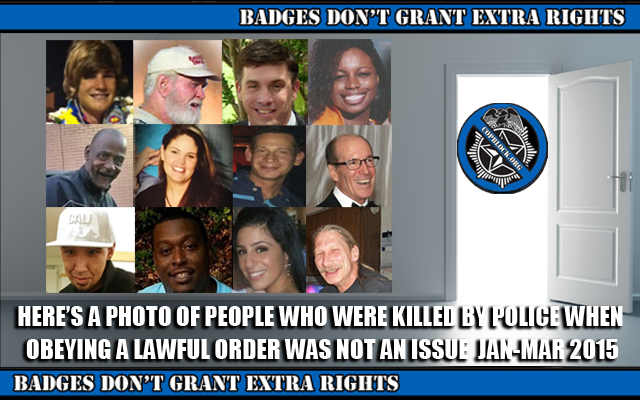 Law Enforcement Today, a police propaganda website, posted the following wholly inaccurate, intentionally misleading meme to its Facebook page this past Thursday. The meme claims that all of the 1,140 to 1,205 people killed by law enforcement officers in 2015 were only killed as a result of refusing to obey lawful orders from those officers. This meme is a lie so obvious, so grandiose that only those who believe every death at the hands of a police officer is justified, no matter the circumstances or evidence, could possibly swallow it. This meme conveniently and callously ignores cases like six-year-old Jeremy Mardis who was shot and killed by two deputy city marshals who appear to have had no legal reason to stop Chris Few (Mardis’ father), and opened fire on the stopped vehicle they were in even though Few had his hands up and was not presenting a threat to the officers; Akai Gurley, killed by NYPD officer Peter Liang who was just convicted of manslaughter and official misconduct for negligently firing into a darkened stairwell and then failing to render aid to Gurley, instead contacting the union to help cover his ass; India Kager, who was “accidentally” shot and killed while shielding her infant son with her own body as Virginia Beach police officers filled the car she was in full of lead;  Bettie Jones, another innocent bystander “accidentally” shot by a Chicago police officer she had just opened the door for.

If only those people had a website where they could look over the facts of cases of people killed by police last year. Oh that’s right, there are several. For convenience’s sake, I looked only at cases on The Counted for January through March of 2015. That yielded 288 incidents. Here’s what I found.

Cops’ Infamous Shitty Driving is a Danger to Themselves and Others

The danger that law enforcement officers’ careless driving poses to themselves is a well-known fact, however the number of other people they kill in car accidents is not as well reported. I found eight cases of pedestrians and bicyclists who were struck and killed by LEOs:

Cops Charged with Murder and Other Crimes

Since cops insists that their canine dead be considered the same as human officers, no list of unjustified deaths at the hands of law enforcement officers would be complete without including K-9 officers. This article provides details of the 11 police dogs killed by the actions of other police officers.

There, I Fixed It for You

If Law Enforcement Today had done even a cursory round of fact-checking they would have perhaps thought twice about posting their disgusting meme that spits on the memories of all the people unjustifiably killed by police last year. But probably not. The website’s raison d’être is providing the type of ultimately self-defeating propaganda that encourages police to refuse to even acknowledge, much less learn from, their deadly mistakes, and further isolates them from the communities they purport to serve.

Here’s what that meme would look like if its creator had been at all concerned with accuracy. I chose to use a photo with a door in it because every law enforcement officer or public official who agreed with the original should hand in their resignation and walk right out the door of whichever agency hired them. They are unfit to serve and a menace to society.