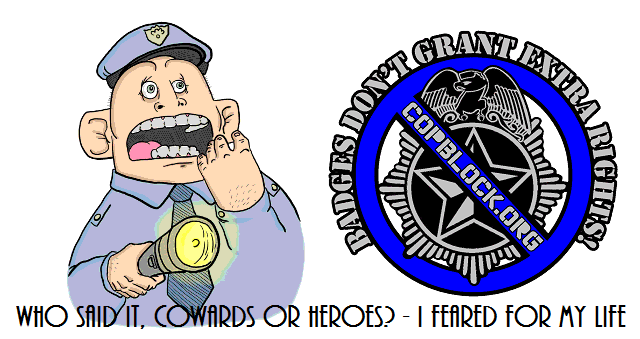 Police and their syCOPhantic supporters sure do a lot of double-talking. The inconsistencies in their message are legion. Yet to me, no hypocrisy in these regards is as telling as the narrative that killer cops are heroes who just feared for their lives. You really cannot have it both ways. A hero puts the safety of others before themselves and a coward kills at the first hint of potential danger to themselves.

In a recent article I shared the following hypothetical message that potential LEO’s should be willing to accept and share with their loved ones if their intention was truly to keep their communities peaceful and safe, and not just take home a paycheck for organized bullying.

Dear Family,
I have chosen a career as a police officer because I firmly believe in protecting every single member of our community. My love for my fellow humans and for this place is such that I would gladly lay down my own life to protect any one of these people. And I will never kill one of these people in order to save my own hide, but only to protect other community members from violence when I am certain the danger exists and there is absolutely no other option. My life is no more important than anyone else’s and neither is yours. While I am far less likely to die than people working in almost twenty more dangerous careers, it does remain a distinct possibility. No matter what happens, I want you to be proud of me for sticking to my ideas until the end. If I die in the service of my fellow humans, then it will be an honorable death, and the end of a life worth living. Because that is what gives our lives value- our ideas, our morals, our values, and the courage and determination to stand by them in the face of any danger. If I ever forget that, then please remind me, because going out there every day with such tremendous power is a responsibility that should not be tasked to the faint of heart or weak of will.

I understand that even a hero fears for their own safety and life. The distinction, though, is that a hero pushes that fear away out of concern for the safety and lives of others first and foremost. Many people who have been called heroes in the past have responded to questions about whether or not they were afraid by responding that they didn’t have time to be afraid, as they needed all of their concentration to focus on doing the right thing in a difficult circumstance. The fear went unnoticed until their bravery had succeeded.

So why are so many cops drudging up the tiresome ‘I feared for my life’ when justifying killing civilians who, at least as often as not, did not need to die at the hands of police?

One reason is that cops are being trained to fear for their lives. An overabundance of conditioning is hard-wiring a fearful response into the minds of officers. They are given conditions in which they are taught it is justifiable to use excessive force, based only on certain requirements, and not the compassion or reason you would hope cops exercised before mindlessly conditioned responses. This is from another recent article:

Every situation police respond to is, in some way or another, a human situation. The last thing we need are for the people who are responding to difficult human situations to be people who have been conditioned through their training to put their humanity aside and think only within the narrow confines of the role they have been assigned using only the pre-ordained responses absorbed through training. Difficult human situations require a response by people thinking like a person, not a mystical authority figure thinking like a mystical authority figure. The training we are giving cops as a society and professionally has created a machine which chews up human beings and spits them back out either broken or dead.

The other main reason can be explained by the old adage: “Absolute power corrupts absolutely.”

It is also just as true to say that: “Absolute power attracts the corruption-prone.”

Another recent quote from yours truly:

I have met other great people who worked in policing. I have also met some very shitty ones. I saw the kids that got picked on in high school grow up and adopt the badge as a shield of misguided vengeance. I saw the bullies and mindless sportsball meatheads enter that career as a way of extending the shelf life of their adolescent violence and cruelties. These people are not bad cops because they are bad people. They are bad cops as well as bad people. Not only is their profession and position rotten to the core, their personal ethics, values and morals are unscrupulous.

No matter what the reason, however, it is not logically consistent to think that someone can both…

That is illogical double talk. It is meaningless nonsense. Although cops are beaten out by well over a dozen other more deadly careers, there is a danger inherent in the profession. That does not mean that everyone who accepts that danger is a hero. Lots of people who are not heroes, who are full of cowardice and ignorance, put themselves in dangerous situations. Even more so when that dangerous situation is shared by many others. Where groupthink and might-makes-right is present, lots of cowards sign on, not out of heroic courage and bravery, but out of a desire to be above the law and to ride the coattails of the group. This also includes the thrill-seeker junkies whose motivation is not bravery, but to participate in high octane activities, with a demonstrably high degree of survival chances.

A hero never kills and then blames it on the fact that they feared for their lives. That is what cowards do. Heroes lose themselves in their integrity and honor and do what is best for others. So can the bootlicker bullshit already. The world needs more heroes and less cowards. Telling cowards that they are heroes is the most deadly mindless message that police and their syCOPhants routinely express. We are sick of the double talk. Where you see pride and respect in that inconsistency, rational people see hypocrisy and ignorance. And if hypocrisy and ignorance are the best talking points that police and their rabid supporters have to argue, they are doing nothing but proving my assertion that accountability is futile and we must abolish the police.