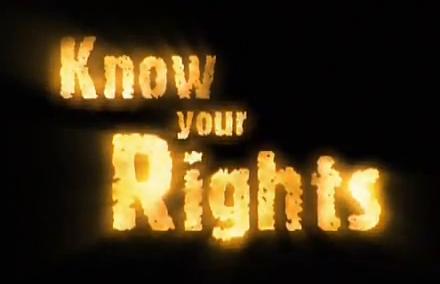 The post below was submitted via the CopBlock.org “Submission Tab” by Fay, who’s aa content specialist at Zev Goldstein Law Firm. It should be noted that the advice given is that from an attorney’s perspective. It should be considered as a base for what you may need to know when stopped by police but you are encouraged to do further research for how the laws are exactly in your area. Also, the advice is geared more towards those who will choose to fight their charges in the court and not those who attempt to win in the court of public opinion.

When you’re pulled over, whether it’s for speeding, disobeying the laws of the road, or for a check to see whether you’re driving under the influence, you’ll probably have one of two reactions: either you’ll be inclined to go along with everything the officer says in the hopes that things won’t get worse, or you’ll be frustrated and belligerent. Underneath, you may find yourself wondering whether or not you’re even doing the right thing. Should you be polite and accommodating? Should you protest or refuse certain things, like a test to see if you’re driving under the influence? Knowing your rights and how to exercise them can save you a great deal of aggravation later on.

What Are Your Rights?

When you’re pulled over, you have the right not to incriminate yourself. Without a warrant, you don’t have to consent to a search of your vehicle. You also do not have to answer any questions that you don’t want to, nor are you required to incriminate yourself. Sometimes, your silence is your best defense. You also have the right to record the encounter, though it should be noted that most police cars are equipped with dash cams that are probably already recording your stop.“Remember”, asserts traffic violations attorney, “you do not have to consent to a search of your car without a warrant”.

Is It Wise to Exercise Your Rights?

Understanding your rights during a traffic stop is important. How you exercise them, however, can be the difference between a brief inconvenience and a long, drawn-out affair that causes you a great deal of difficulty. If you know that you’re innocent of a crime, that there’s no contraband in your vehicle, and that you aren’t driving under the influence, consenting to basic tests can be the fastest way to get you on the road to your destination once more. Being deliberately belligerent is the fastest way to escalate the situation and end up with a ticket. See here.

Can Police Pull You Over Without Probable Cause?

Most states have laws requiring police officers to have a reason to stop your vehicle. It’s important to remember, however, that “probable cause” doesn’t take much (see here). Failure to use your turn signal, suspected driving without a seat belt or while using your cell phone, and a variety of other small errors can all give an officer a reason to pull you over.

There are several different checkpoints that you may encounter while behind the wheel. You are required to stop for all of them, giving officers the opportunity to check your license and registration, get a look at your eyes, and get close enough to sniff your breath. At these checkpoints, however, you are not required by law to answer any question an officer asks or to incriminate yourself.

Your Rights: Breathalyzers and Blood Tests

If you’re pulled over and suspected of driving under the influence, most officers will ask you to take a test to measure your blood alcohol level. These tests are typically not optional. Most states have implied consent laws, which state that by driving on the road, you’re giving your consent for the police to make sure you’re doing it safely. Refusal to take these tests can result in severe consequences later.

Is There a Legal Rubric Governing Attitude?

There are plenty of cases of people ending up in deeper trouble because they’ve given the cop an attitude after they’ve been pulled over. An attitude escalates the situation. Many people are determined to make things as difficult for the police officer as possible on the grounds that they have the right to react as they like. There’s no law governing a citizen’s attitude during a traffic stop. However, a polite and cooperative attitude that is as helpful as possible can go a long way toward resolving the situation. Keep in mind, too, that a police officer’s first priority during a traffic stop is their own safety. If they believe for any reason that you’re a danger to them, including because you have issued threats or appeared to reach for a weapon, they then have the right to respond appropriately.

If you’re going to use the road, it’s important to know your rights. Exercising them appropriately can save you a lot of hassle later. On the other hand, the most important thing is remembering to drive safely and obey the laws of the road, including staying off the road when you’re under the influence of drugs or alcohol. Driving safely is the best way to stay on the road and keep driving right on past the police officer at the side of the road.

Additional Resources About Knowing Your Rights: