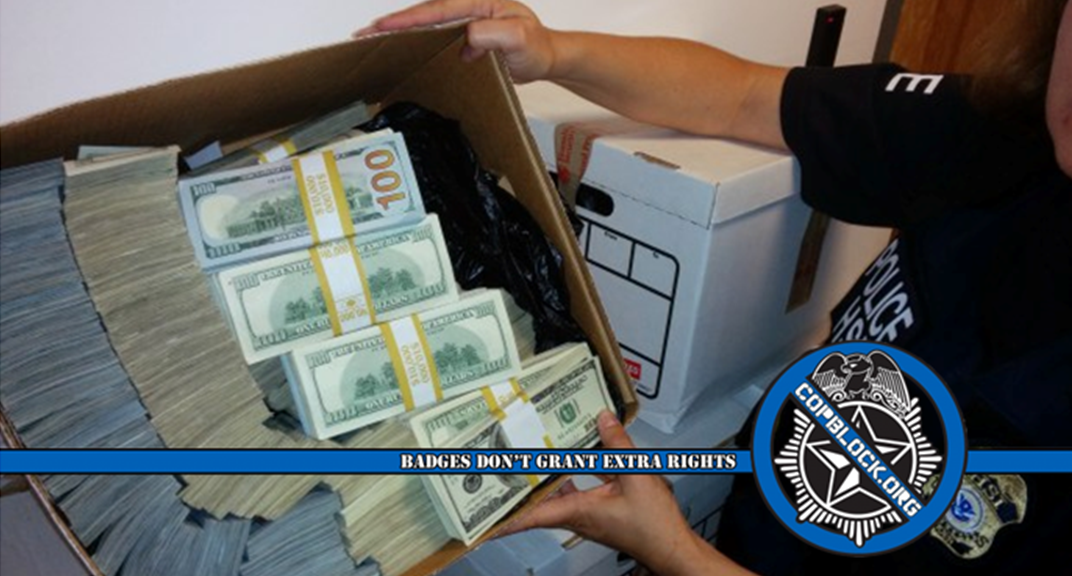 In a lawsuit filed in Chicago federal court, multiple plaintiffs are alleging that the Kane County Sheriff’s Office is running a racketeering scheme for their own benefit under the auspices of asset forfeiture.

Civil asset forfeiture allows cops to seize any property they allege is involved in a crime – even if the owners are not even arrested or convicted of anything. Property owners are then left having to prove a negative, reversing the burden of proof, that their property was not gotten by criminal means before it is auctioned off to fund police departments and governments.

America Martinez, Rodolfo Tapia, and Ismael Jaimes-Meza – who are all from out of state – filed the 15-count complaint in U.S. District Court for Northern Illinois last week saying their Constitutional rights were violated by cops who pulled them over, falsely arrested and searched them, and confiscated their cash and car without cause last year.

Tapia alleges he was driving through Kane County with Martinez and Meza on April 15 when they were stopped by Sgt. Hain because of a handicapped placard hanging on the rearview mirror and a global positioning system unit that was mounted on the windshield.

According to the suit, Tapia was cited for obstructed view infractions – but after other deputies arrived on the scene, they searched the vehicle and all occupants without consent and seized $5,118 in cash and a debit card with a $566 balance on it from Meza.

Meza said that he tried to explain the cash was from a tax refund, but the three were taken to the sheriffs office and strip searched without being read their Miranda rights or given phone calls, the suit says, and were told they were not under arrest.

The lawsuit says police had no grounds for the searches and that making them get nude violated state law because no authorization from a superior was granted, nor was any record filed documenting the actions.

No illegal items were found during the searches and none of the plaintiffs were charged with any crimes. They were all released from custody by the next day.

Tapia also said in the suit that he was pulled over one month after the incident while he was driving with Martinez and was again illegally searched by Hain without consent or justification.

The lawsuit accuses the sheriff’s office of the “widespread practice” of extending traffic stops without reason in order to seize money and property from drivers while falsely arresting them and then “cover[ing] up” the unlawful detentions by characterizing them as “investigative holds.”

The plaintiffs say the activities amount to nothing less than a “racketeering enterprise” that has netted the county millions of dollars – and quoted Hain in the suit as saying that forfeitures could be a “tax-liberating gold mine” that the local government could use to “pull in expendable cash hand over fist.”

The suit is seeking compensatory and punitive damages.