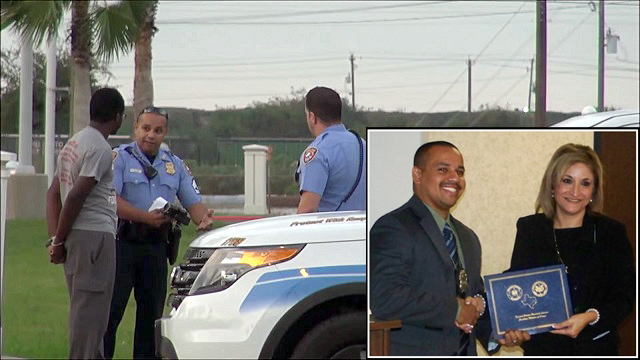 The Texas cop who unlawfully searched the car of a PINAC correspondent while he was incarcerated for recording a police memorial last year was indicted on a misdemeanor criminal trespass charge Thursday.

Galveston Police Sergeant Archie Chapman faces up to 180 days in jail and a $2,000 fine, according to the Houston Chronicle.

As of Monday, the award-winning officer who has a history of abuse has yet to be arrested for the incident captured on Phillip Turner’s dash cam.

However, he remains on paid administrative leave for the incident that took place in November where he and other cops arrested Turner outside the Galveston Police Department while Turner video recorded a police memorial.

Police claim they arrested him for not identifying himself, but Turner was under no legal obligation to identify himself unless they articulated a reasonable suspicion that he was involved in a crime.

Video recording a police memorial in front of the department – or even the license plates of cars leaving the police parking lot as they accused him of doing – did not meet that burden.

After all, the whole point of license plates is that they remain visible to the public eye to allow police and the public to read them.

Video of the arrest was captured by David Worden, who incidentally was not arrested for video recording. At least not that time.

Once Turner was arrested, he continued to refuse to identify himself, saying he would be more than happy to do so, if only they could provide a legitimate reason to arrest him.

But they were unable to do so, which prompted the infuriated cops to take his keys and use them to enter his car that was parked at a nearby parking lot.

“This is what happens when you question authority,” Galveston police officer Gilbert Villareal told Turner after they had found his wallet in his car and were able to identify him.

Charges were dismissed against Turner within a week.

Turner, who operates the YouTube channel, The Battousai, has two pending lawsuits against the Forth Worth and Round Rock police departments.

Chapman’s lawyer told the Houston Chronicle that the officer was only trying to keep the community safe by entering Turner’s car without permission or a warrant.“Sgt. Chapman was trying to do his job as a police officer,” Greg Cagle said. “He had no motive other than to protect the public and the officers.”

But that was not enough to convince the grand jury, who went ahead with the indictment anyway.

In 2013, Chapman was one of several Galveston police officers captured on a dash cam kicking, punching and submerging a man’s head under water after the man was found sleeping in his car by a seawall.

“As of 2005, there were more than fifty-four such complaints pending against the Galveston Police Department. The complaints of excessive force since 2005 have continued and have been numerous and well publicized,” the complaint stated.

Videos of Turner’s arrest by Galveston police as well as the one of police unlawfully entering his car are posted below.