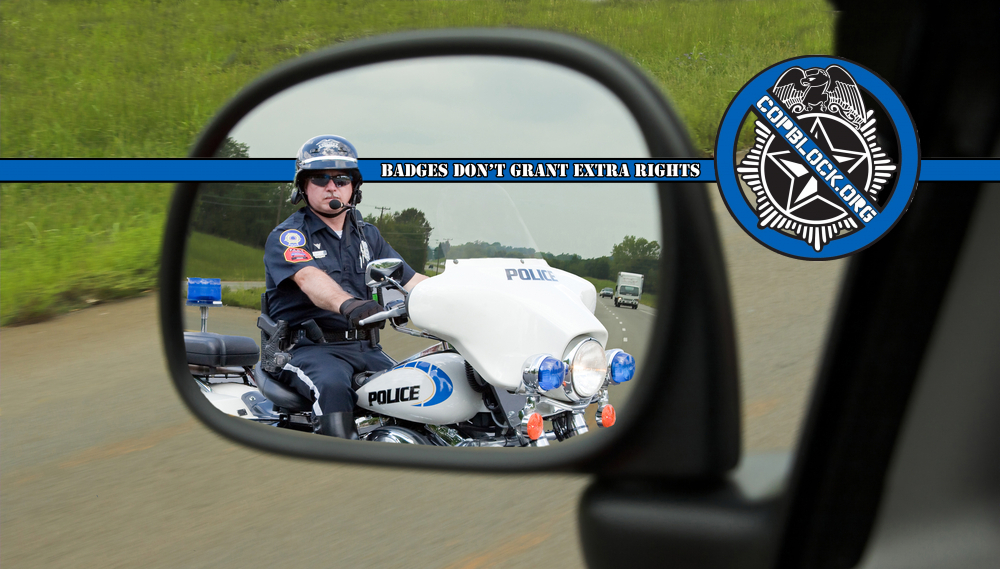 The following post was shared with the CopBlock Network by Omer Jaleel of Jaleel Law in Chicago, IL., via the CopBlock.org Submission Page. Along with the submission, Jaleel included this statement:

I recently wrote an article on my website that I thought would be a great fit for CopBlock.org. The article answers a question that I receive on almost a daily basis at my law firm and I’m guessing that CopBlock.org is the same. That question is whether the police can order you out of your car.

Unfortunately, SCOTUS has held that the police can order someone outside of his or her car based upon officer safety. The article discusses this issue, what the reasoning for the court’s decision was, and what someone can do to protect his or her rights. If you need any additional information about your rights during a traffic stop or are need of a defense lawyer, please do not hesitate to contact me.

Can the Police Make You Get Out of Your Car?

Most encounters with the police occur after a traffic stop and while most traffic stops are routine, the cops are trained to view traffic stops as a potentially dangerous or deadly situation. That view sometimes can result in terrible outcomes, which is why it is imperative that everyone knows their rights.

A situation that arises more often than not is a police officer asking someone to get out of his or her car following a routine traffic stop. While common sense says that being asked by the police to get out of your car after being stopped for something as trivial as an expired registration sticker or not using a turn signal is unreasonable and an invasion of someone’s rights, the United States Supreme Court held otherwise. In a landmark decision, the Supreme Court held that the police can make you get out of your car after a valid traffic stop. This ruling applies to the driver and all the passengers in a car. Because of this ruling in Pennsylvania vs. Mimms, a person must exit their car if ordered to do so by the police.

Background of Pennsylvania vs. Mimms

Mimms involved a case where two Philadelphia police officers stopped a car being driven by Harry Mimms for driving with expired plates. After stopping his car, the police ordered Mimms to step out of his car, which was common practice for the police department. After Mimms complied with the officer’s order, the police observed an unusual bulge in Mimms’ jacket. The police then searched Mimms and discovered a handgun.

Mimms unsuccessfully sought to have the gun suppressed on the grounds the police violated his 4th Amendment rights against unreasonable searches and seizures. The Pennsylvania Supreme Court ruled that the police did not have probable cause to order Mimms out of his car and reversed the conviction against him. However, the Supreme Court of the United States agreed to take the case on appeal to answer the question whether the police order to Mimms for him to get out of the car, which was given after Mimms was lawfully stopped for a traffic violation, was reasonable and thus permissible under the Fourth Amendment?

In a 6-3 per curium opinion, SCOTUS held that the police routinely asked drivers who were being ticketed to exit their cars for the safety of the officer. The police stated that it would diminish the chance that person could get something from the car while the police officer is writing the ticket and attack the officer. Also, if the stop was executed in a high traffic area, having the driver stand between the police car and the driver’s car allows the police to conduct the traffic stop away from moving traffic.

Why Can the Police Make You Get Out of Your Car?

The Mimms court held that allowing the police to make a driver exit his car is a nothing more than a “mere inconvenience” to the driver especially when compared to the safety benefits to the police. The court reasoned that since the car was stopped after a valid traffic stop and ordering the driver to get out of the car was a “minimal and reasonable intrusion” of his freedom. The court further held that the search would have occurred regardless if Mimms was out of his car or seated, because the bulge in his jacket was visible while he was seated in the car. The court held that the bulge allowed the police to assume that Mimms was armed and posed a danger to the police. Under these circumstances, the Mimms court held that any cop of “reasonable caution” would likely have conducted the “pat down” of Mimms.

The dissenting opinions in Mimms that were written by Justices Marshall and Stevens argued that the new rule created by Pennsylvania vs. Mimms greatly expanded the police officer’s right in searching an individual that they stopped. The dissenting opinions predicted what would happen, the police were limited in searching an individual only to the extent they could invent a justification for the search based upon officer safety.

After a traffic stop it is imperative that you do everything possible to protect your rights and that can only begin if you know your rights. If stopped by the police for a traffic stop, the officer can order you out of your car without violating your constitutional rights. However, that doesn’t prevent you from doing everything to protect your rights. Remember the interaction as best as you can and write it down, better yet record the interaction.

However, the most important thing you can do is hire a criminal defense attorney who knows what he or she is doing. Not all criminal defense lawyers are fully versed on the 4th amendment and search and seizure law.