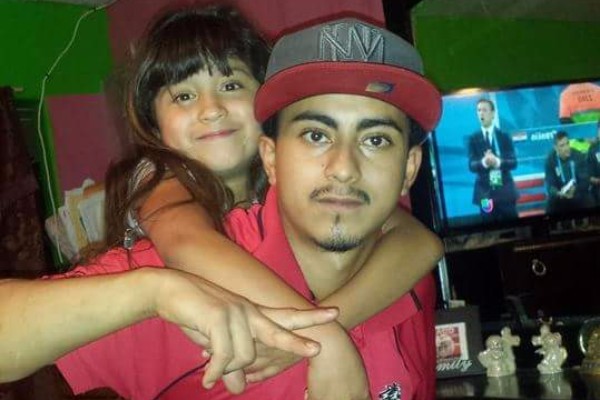 Edgar Camacho-Alvarado, 23, was shot and killed by police (either U.S Marshals or the New Mexico State Police) early last Saturday morning. His family says he was trying to fix his truck’s engine when a number of law enforcement officers came into their area. It’s known that the raid was based off a warrant for George Bond, who’s wanted for murder. It’s also known that Bond may have been at trailer #29 but what’s unclear is why the police were at trailer #26, where Camacho-Alvarado lived, and how he ended up being shot. According to the Albuquerque Journal:

Inside the other, trailer #29, was a man on the run. George Bond, 25, was wanted on a warrant for murder.

All that is certain is that Camacho-Alvarado, not Bond, was shot and killed outside his home.

New Mexico State Police, which is handling the shooting investigation, confirmed Camacho-Alvarado’s name late Sunday. Spokesman Chad Pierce said in a short press release that the shooting happened after a deputy U.S. marshal got in a “confrontation” while trying to execute the arrest warrant.

But authorities still refuse to say which agency’s officer opened fire on Camacho-Alvarado. And they have offered no explanation as to why shots were fired at him.

Some of Camacho-Alvarado’s family members were at home when he was shot and believe authorities went to the wrong trailer.

Carlos Camacho, Camacho-Alvarado’s older brother, said his mother was in bed when she heard a gunshot.

Her son was asking for help and she ran outside and cradled his head on the steps leading to the trailer, Camacho said.

“He told my mom, ‘I don’t want to die,’ ” Camacho said in an interview outside the trailer Sunday.

After the shooting, Camacho says U.S. marshals turned to his mom and asked her a question: “What’s his name?”

Family members say his body stayed there – next to the trailer steps in front of the truck he’d been working on – for 14 more hours.

That’s because law enforcement officers began focusing on trailer #29 where George Bond was holed up. They lobbed flash bangs through the trailer’s windows until Bond and six others came out and were arrested later in the afternoon.

A search warrant return from trailer #29 shows that officers took George Bond and a cellphone from the trailer. At least one Albuquerque Police Department officer’s signature is on the warrant.

Bond was wanted in connection with the 2014 death of Charlie Davlin in Los Lunas. The case was dropped in 2015 but was reopened in late January 2016.

Authorities issued a warrant, and U.S. marshals tracked him to a Downtown-area post office on Friday. Bond managed to escape them.

It appears they knew he was at the trailer park when they arrived, but they came across Camacho-Alvarado first and he was killed.

Bullet holes labeled with markers still remain on the front door of trailer #26 where he died.

His family says he didn’t have a gun or any other weapons. There seems to be only two explanations for the shooting of Camacho-Alvarado. That the LEO’s got the wrong trailer and startled him (and them) which lead to him being shot. Or the LEO’s were attempting to set up a perimeter around Bond’s trailer, didn’t expect to see Camacho-Alvarado and shot him in confusion.

Neither is good. What’s even more pathetic is that the police won’t share any information. Not even the usual remarks of officers being on paid leave. At this time it’s also unclear whether video of the shooting exist. All the U.S Marshals have said was, “it was a mistake.”

When a murder happens at the local gas station that has video, that video is the first thing you see on the news. If the names of the people are known those are also flashed across the screen with an enhanced image of the perps face. Yet, when it comes to police who kill the information is locked up tight. We’re told little about why men with guns were attempting to raid a home, why they seemed to be at the wrong address or how in the world they ended up shooting an unarmed man!

This should never be tolerated by police who kill. There should be no reason that the officer’s name, body camera footage, radio audio and other such evidence shouldn’t be release just as it would for anyone else. And don’t tell me about tainting a jury or the investigation. The state taints juries daily and police botch investigations just as much. This is what a double standard looks like and if you disagree, just try murdering someone and asking for paid leave while the investigation is pending. Let me know how that works out for you.

Consider helping the family by visiting their GoFundMe page; HERE.