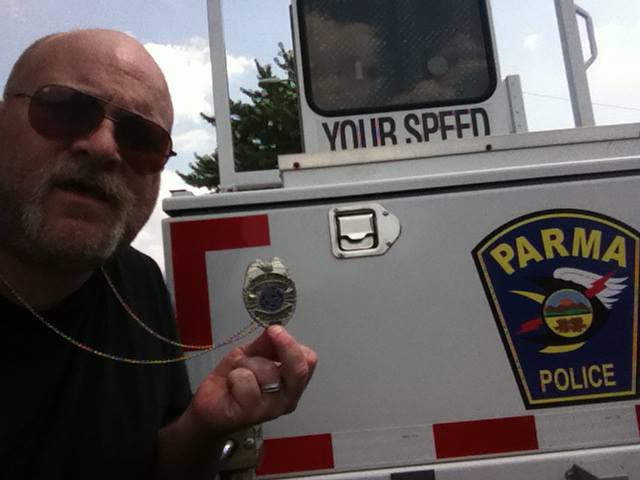 Today I begin a 240 day jail sentence in the Parma (OH) Detention Center. What brought me here? Holding a sign informing drivers of a checkpoint and filming the police while they were were dealing with a suicidal (more like troubled) teen. If you watch the videos of my arrest you might find yourself asking, “240 days for that?” Which were my thoughts as the judge handed down my sentence as well. As I sit here in my new home, paid for by the taxpayers, I decided to write a reflection of the events that brought me here.

In 2013 I was cited for holding a sign warning folks about a checkpoint (see video below). The police didn’t like that I was keeping unsuspecting motorist from accidentally traveling into a police checkpoint. Therefore they approached me and stated that I needed to remove the words “turn now” from my sign. I refused and was cited for “Obstruction of Official business.”

Checkpoints might be socially accepted by people these days but the fact remains that they are clear violations of our 4th amendment rights. This means police are not supposed to be subjected to searches, or detainment, without probable cause. The police need to have reasonable, articulable suspicion that you have, or are about to commit, a crime. Yet, the Supreme Court has said that police can detain you for a ‘short’ amount of time so long as the police follow a set of guidelines. The Parma Police do NOT follow any such guidelines. Which is why I’m out there CopBlocking checkpoints and that’s the reason why I’m writing this from a jail cell.

Two years later I was arrested for filming Parma Police officers while headed home from lunch (see video below). I spotted a whole gaggle of cops on the side of a public roadway talking to someone sitting on a guardrail. Turns out it was a kid threatening to jump off a bridge but that threat had passed prior to my arrival. Furthermore, I did NOT know this until AFTER my arrest. Instead I was told by Sgt. Gillisie that “he [the kid] is a juvenile” and that “I could not film him without the parent’s permission.” Knowing that statement was false I continued to film. Gillisie then tried to knock my camera out of my hand and assaulted me in the process. His actions weren’t to protect the kid but to hamper my ability to film. That is clear in the video.

None of this – OUR rights to monitor public officials – mattered in the courtroom. The jury took just two hours to find me guilty on all charges. Judge Deanna O’Donnell, who had been very cordial and accommodating throughout the whole trial, was ruthless when it came down to sentencing me. O’Donnell put all her hatred for those that exercise their rights to monitor public officials on me. She talked about how police these days are spit on, cursed at, fought and killed as if my actions of filming were even comparable to any of those she mentioned. Remember, I hadn’t laid my hands on anyone in any of my accused ‘crimes.’ Something the police cannot say for themselves but, somehow, that was lost to the ‘honorable judge.’ She made it sound like I was responsible for all the hardships that was happening to the police all over the country. She expressed her admiration that, despite all the abuse the police put up with, they still come when YOU call them.

What O’Donnell fails to realize is that the police have brought this all on themselves. All too often when the police ARE called and they are the ones who bring violence to a situation. She must have realized this when she refused to allow any sort of evidence into the trial that highlighted a pattern of abuse and misconduct by Parma Police employees. Many people in Parma know exactly what I’m talking about and are afraid of the Parma Police. This fear is based off the reality that I’m living today. That if you attempt to highlight police wrongdoings not only will the Police harass you but the courts will back them in during the prosecution.

When I first started filming the Parma police I got several videos of various officers failing to use turn signals, speeding, blowing red lights without their emergency lights on and heavy handed arrest. I also started alerting motorists when Parma Police were conducting speed traps by hiding behind buildings and business signs. These actions of mine didn’t lead to the police becoming better cops who focused their attention on real crimes. Instead the police focusing their attention more on me. I was confronted several times by Parma Police officers who were very aggressive. In one of my videos Officer Stasiak (sp?) confronted me like an angry child throwing a temper tantrum. Another video shows a Parma Motorcycle cop taking radar from the sidewalk which is a violation of Ohio law (to park a motored vehicle on the sidewalk). Add in the fact that there’s been a few lawsuits settled out of court and there’s clearly a pattern of police activity that’s outside the scope of the law here in Parma.

Nevertheless, O’Donnell had the nerve to called me the ‘bully’ during my sentencing. When the videos of my arrest show the the police were the ones to approach me – BOTH times. I’m just a man responding to the actions of a bunch of bullies known as the Parma Police department. I wish the judge had been able to see the videos I’ve posted praising officers for a job well done. I wish the police dealing with the kid had left me alone so I could have posted a video titled, “Hero Cops Saves Suicidal Teen.” Instead, since the Parma Police don’t like to be filmed, they threatened, assaulted and arrested me. So that’s the video that was posted.

O’Donnell you sit on your bench protecting these pigs with your black robe and lecture me about how with great power comes great responsibility? Please, spare me. You allow these thugs to assault people on video and get away with it! You let the State use all kinds of irrelevant information about me, yet, you will not let my defense team show the dirty side of the Param Police Department? How dare you call yourself a Judge! You don’t work for the people, you work for the state! You’re a slave to the system.

So I’ll sit here in your cage for the next 240 days. A cage where the only water you get taste like metal, the beds are made of concrete and a sliver of padding is what they call ‘bedding’ here. Where I’m forced to sleep with the light on, have no pillow to rest my head and the food is something of a mystery in itself. Everything is in a fixed position, from the chairs to the tables, and even the TV is in a spot where you need to stand to see it. And before the CopSuckers start saying, “You’re in jail, it’s not supposed to be comfortable.” Shut up. First, my ‘crimes’ do not warrant this treatment. Second, I’m not talking about comfort, we’re talking about humane treatment. It would have been more humane to take my ass out back and shoot me in the head, IMO.

Is this what the people of Parma want? To jail people for monitoring public officials? Or for attempting to bring the disinfecting light of transparency to the police? Do you feel better knowing that the Param Police and court system are using your tax dollars to get their vengeance? I guess I get the last laugh here because I don’t pay taxes. I don’t support a system that is willing to punish those who’ve done no harm to another (me). I don’t mind sitting here because I know what I did was right. Yet, the system is punishing you too by forcing you to pay for my stay here. And that’s wrong… how many more like me will have to be locked up before you speak out?

Think about that…. for now I have to go, my babysitters want me to clean my cell before they bring me food. I am the only one here so it’s an easy task and everything smells like disinfectant when I’m done. See, I’m still cleaning up this town from the inside, LOL.