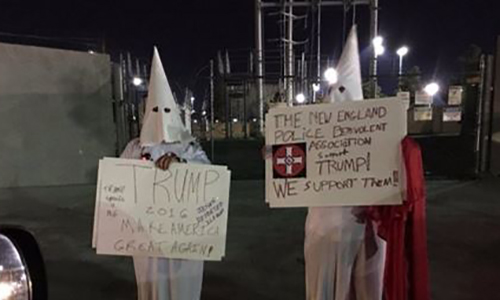 The internet has been full of buzz surrounding the upcoming election of a new master to the USSofA. Yes, I find politics revolting and the fact that millions upon millions of people uproot their lives, work to get psychopaths ‘elected’ only to have it come crashing down over the next four years as they watch the person they worked to get elected fail them (or flat out ‘lose’); time and time again. Yes, politics is a waste and the most harmful, wasteful activity on this planet, IMO.

Yet, I’m not here to tell you how stupid you are for voting (sorry, voting in elections is really stupid). Yet, plenty of idiots rushed out to vote in yesterday’s Nevada caucus. Including two dumbasses who held signs encouraging voters to vote for Trump. Of course encouraging anyone to vote for anyone would bring you into the dumbass class for me but these two took it for another reason. They were dressed in full on KKK gear. How does this relate to the police? Well one of these brilliant souls held a sign that stated: “The New England Police Benevolent Association Supports Trump! We Support Them!”

This has put Trump supporters on the defensive especially since the New England Police Benevolent Association (NEPBA) recently did endorse Trump. Of course the NEPBA denies having any involvement in this act and that the individuals in question are members of theirs.

Yet, you can never be sure. We know that the Thin Blue Line extends outside the police stations of “america” and heavily into politics. We also know that individual cops have been linked to ties with the KKK. So this could be real.

On the flip side of the coin. This could be a very good troll on a very bad system and/or a brilliant way to deter people from checking that box. A check that will essentially give someone the power to not only control things in your life, but millions of others’ as well. And not just here in the USSofA but all over the world.

So while you think these two guys are disgusting, sick individuals…. take a moment to think of the type of person you’re about to vote for. They too think they know how you should live your life, just like the KKK.