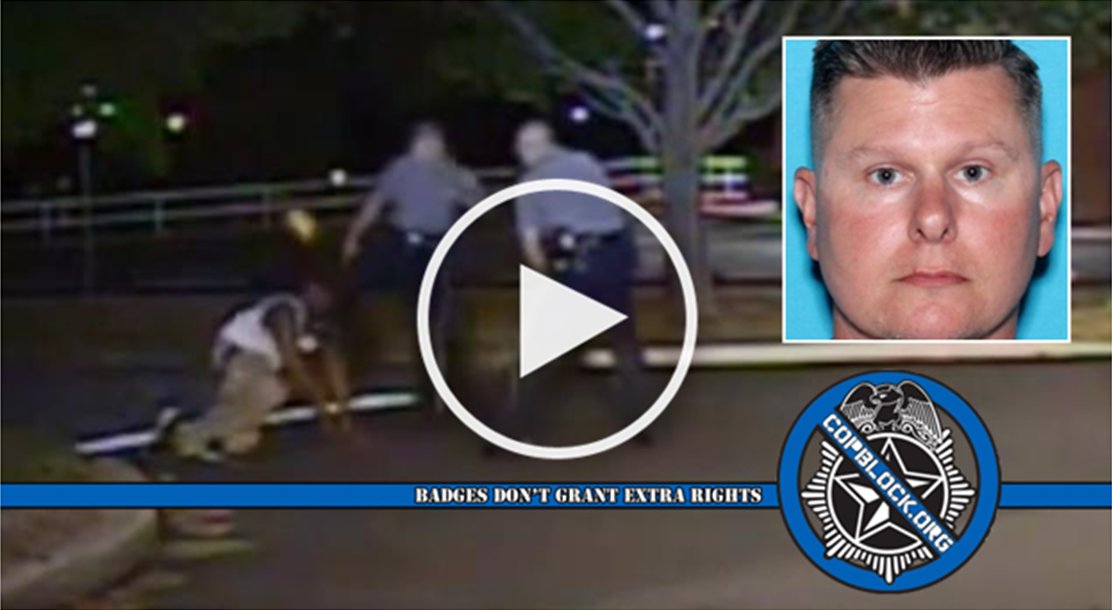 A Dover, Delaware police officer indicted and arrested on an assault charge last May, escaped conviction following a jury trial in December despite damning dash-cam footage showing him kick a complying suspect in the face.

Now, Cpl. Thomas Webster is receiving $230,000 as part of a resignation agreement he finalized on Tuesday – which also stipulates he be paid his full salary and benefits until he officially leaves his position on June 30.

According to the agreement, the $230,000 number will come from taxpayer payments of approximately $40,000 a year that Thomas will receive for six years beginning in January 2017.

Webster was charged with second-degree assault, a felony, for an incident that occurred on Aug. 24, 2013, in which he responded to a call about a fight at a Hess gas station.

Investigators said he approached 29-year-old Lateef Dickerson, who matched the description of one of the suspects involved, and attempted to take him into custody while another officer held him at gunpoint.

Dash-cam video recorded from the scene shows Webster kick Dickerson in the back of the legs before telling him to get on the ground as he surrenders with his hands up.

As Dickerson continues to comply and crouches down, Webster can be seen kicking him in the face, breaking his jaw and causing facial lacerations to his lip, nose, and forehead.

Afterward, Dickerson was put in handcuffs and taken into custody. He was later treated at a hospital for his injuries.

In March 2014, the Delaware Attorney General’s Office reviewed the case and found that there was “not a civil rights violation.” A grand jury choose not to indict, and in June 2014, Webster was allowed to return to full duty.

When the Dover Police Department completed its own investigation in May however, it found that Webster’s actions in the incident were “outside department policy” and decided to indict him on second-degree assault.

Webster turned himself in and was released on $5,000 bond before being placed on unpaid leave pending the outcome of the case – which came in December when a 12-member Superior Court jury handed down a verdict of not guilty following five days of testimony.

During the proceedings, Webster testified that Dickerson was slow to comply with his commands to get on the ground, and maintained that he was scared for the safety of himself and other officers because they had been erroneously told that the man was armed with a gun.

He said he was aiming to kick Dickerson in the upper body but kicked him in the face by mistake – a claim not mentioned in original police reports from the incident, prosecutors said.

Webster’s attorney, James Liguori, argued that the officers use of force was justified and said, “the fact of the matter is when you [break the video] down into milliseconds, you could see the gentlemen moving his hands up and down. We all know Tom was in fear.”

In September 2014, the ACLU filed a civil rights lawsuit on behalf of Dickerson asking for compensatory damages and attorney fees. That suit was latter settled for a measly $15,000.

As part of Webster’s separation agreement, he is barred from further employment with the Dover Police Department and Dover city government, but he will be free to apply at any other police department or law enforcement agency in the country.

As we have seen from many other officers who have resigned or been fired due to misconduct allegations in the past, Webster will most likely become a cop at a new department in no time while still collecting his pension.