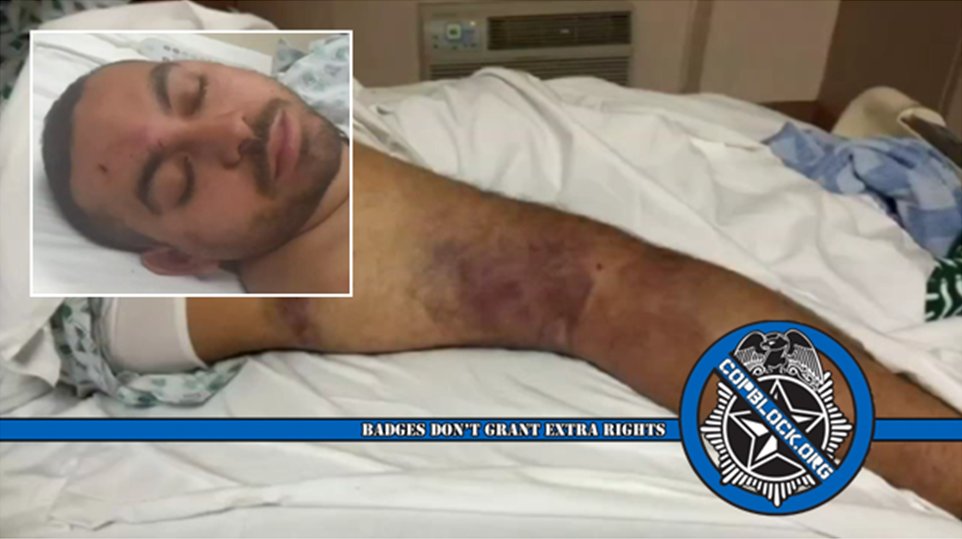 Javier Ortega Jr. says his last memory before waking up severely beaten in the hospital was gassing up his car on the way home after spending some time with his kids.

On December 5, the Texas man wrecked into a rock wall on McCombs Street in Northeast El Paso following a Christmas parade and evening that ended with him falling asleep at the home of this children’s mother.

Ortega is diagnosed with epilepsy and suffers from gran mal seizures. Prescription medication he takes usually makes the seizures manageable, but unfortunately, sometimes one strikes unexpectedly.

According to police reports, officers first responded to the crash at around 12:45 a.m. and determined Ortega’s car had driven in “donuts” before careening into the wall.

He had experienced a seizure. Ortega’s mother, Olaya Calanche, said what most likely occurred was that in the process of seizing up, her son had turned the steering wheel in one direction – which caused his vehicle to drive in circles until it eventually crashed.

The cops said they found Ortega “looking around aimlessly” and that he “appeared disoriented,” so they thought that he may have been drunk or under the influence of drugs.

They said Ortega began saying he needed to leave and as he was trying to walk away, one officer told him that he couldn’t leave and tried to arrest him by grabbing “his arms and forc[ing] him to the ground.”

The officer said while trying to cuff him, Ortega “resisted arrest” so he Tasered him three times and began beating him with a baton while he waited for backup.

After other cops arrived on the scene, they said it took multiple officers to get control of Ortega as he continued to resist by “tensing his arms, thrashing his legs and twisting his body” – which are all signs of seizure and post-seizure behavior, according to Ortega’s doctor.

An ambulance arrived at 1 a.m., and El Paso firefighters identified that Ortega had been experiencing a seizure. They say they found him face down and handcuffed – which is one of the worst things you can do to a seizure victim as it can obstruct breathing and cause death.

Paramedics said that on the way to the hospital, Ortega had seizure-like activity lasting one minute and continued to remain combative. They said he was able to “voice his seizure history but remained confused, alert to name only,” and was in the postictal like state.

The “postictal state” refers to an altered state of consciousness individuals experience after an epileptic seizure that can last as long as two hours. It is characterized by drowsiness, confusion, nausea, combativeness, hypertension, headache or migraine, and is often accompanied by amnesia or other memory defects.

“When he comes out of it, that’s when he’s like walking around like in a state of confusion,” Calanche said of her son’s aliments. “I’ve talked to him and I’ll be like ‘Junior, Junior, it’s Mom.’ He’ll look at me but like he looks past me. I feel helpless.”

Ortega was considered a level one trauma, the most severe, and taken to University Medical Center to recover. He was covered in scrapes and contusions.

Despite medical records confirming that he had a seizure, as well as toxicology reports determining that he had no drugs or alcohol in his system, Ortega was charged with a DWI, resisting arrest, evading arrest and interfering with public duties.

After spending four days in the hospital, Ortega was arrested. He said when he woke up after being admitted, he quickly realized from his pain that he hadn’t had a typical seizure – and was dumbfounded as to what occurred.

Photos taken from the hospital show Ortega’s arms and legs purple and severely bruised. He had burns from the Taser strikes and suffered two broken fingers and an additional broken bone in his hand. The injuries caused him to miss a month of work.

“Typically after a seizure, I’m always sore and hurting so I just felt my body hurt. Like my whole body from head to toe was just hurting,” Ortega said. “When I saw the car, I knew that none of those injuries, the injuries didn’t come from the car accident.”

Since his arrest, the DWI charge against him has been dismissed but Ortega is still fighting the other three charges and has expressed discontent with being beaten and considered a criminal all because police didn’t know how to properly identify a seizure victim.

El Paso police have commented little on the incident and have refused to released both dash-cam footage and internal affairs reports from the incident citing an “ongoing investigation.”