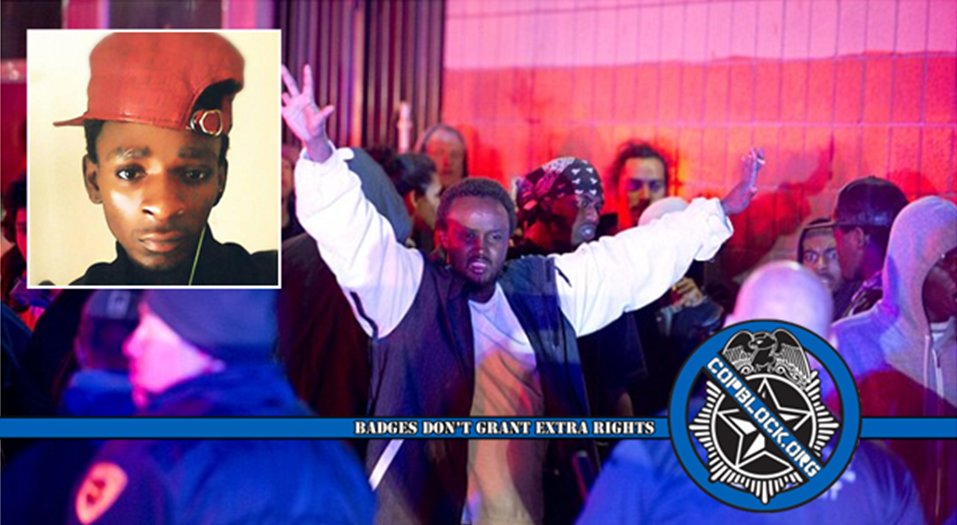 A teenage boy was gunned down by police in Salt Lake City on Saturday for nothing more than holding a broomstick, witnesses say.

The teen has been identified as 17-year-old Abdi Mohamed, a Kenyan immigrate that moved to the U.S. 10 years ago who was living with his girlfriend and their young son.

He is now undergoing surgery for three gunshot wounds to his upper and lower torso and remains in a coma, according to reports.

Police have released few details about the incident but Detective Ken Hansen of the Unified Police Department said that more information will be released in the coming days.

It has been confirmed that the victim was shot at around 8 p.m. Saturday night near 250 South Rio Grande St. after officers responded to a call alerting them to a fight. Police said one or two officers participated in the shooting after they “tried to engage [the] altercation.”

Nineteen-year-old Selam Mohammad was on the scene and said Abdi is a friend of his who was in a confrontation with a man near a homeless shelter.

He said the shooting victim was holding part of a broomstick at his side when officers ran up and “told him to put it down, once” before they “started shooting him as soon as he turned around.”

“We were trying to break it up before the police even came, but the police ran in on foot and pulled their guns out already,” Selam Mohammad said. “They already had them, like, as soon as he was running he was already grabbing for his gun, not even trying to Tase him or anything… He said ‘drop it’ [then] boom boom!”

The witness said police fired at least four times, hitting the teen in the chest and stomach.

Police said that following the shooting, “a lot of hostile people upset about what had taken place” were throwing rocks and bottles at officers – and hit at least one of them.

This prompted almost 100 additional cops with neighboring departments to arrive on the scene in order to assist Salt Lake City police outfitted with riot shields and batons.

At around 8:40 p.m., officers reportedly got control of the situation and moved people down the sidewalk on the south side of 200 South St.. They detained multiple people and blocked off the surrounding area.

The group Utah Against Police Brutality is planning to hold an event at the Wallace F. Bennett Federal Building (125 South State St.) at 6 p.m. on Monday to protest the shooting.

It is not yet clear if the incident was caught on officers’ body-cams but the Unified Police Department has reportedly launched an investigation into what transpired.

Update: Salt Lake City police say dash-cam footage recorded from the scene will not be released citing the ongoing investigation and that the teen could face criminal charges.

They say Abdi was shot twice, not three times – and that officers arrived during an attack by him and another person on a man with metal sticks.

Officers told them to drop their weapons but the teen again moved menacingly toward the victim, so they opened fire, police say.