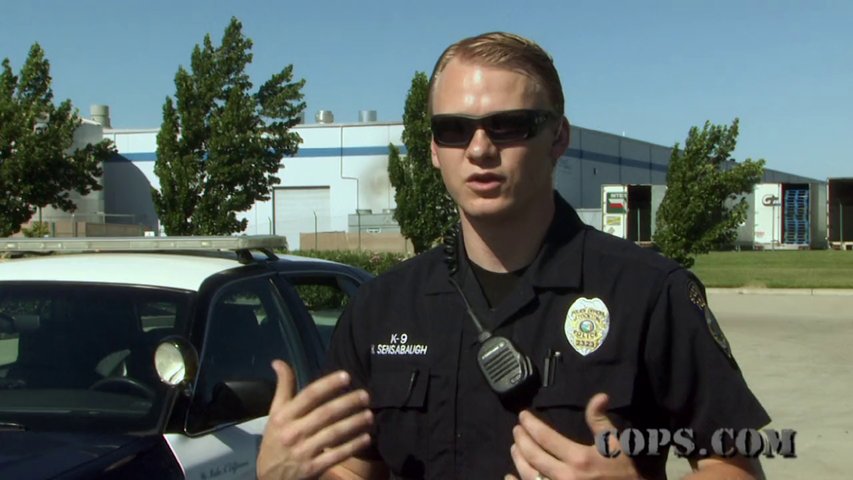 Houston Stephens, a Stockton California cop, killed Angel Alan Gleson, a 36-year-old resident of Modesto, CA after he crashed his vehicle down an embankment on February 26, 2016. Gelson had been fleeing officers from the Stockton and Manteca police departments when he struck another vehicle resulting in the crash.

It is alleged that he pointed a gun at the officers forcing the officers to open fire out of safety for their own lives but this tired narrative has become the go to defense for killer cops, making it nearly impossible to discern what really happened.

The Manteca officer involved was identified as Armen Avakian, a 25 year police veteran. The Stockton officer was identified as Houston Stephens, an 8 year veteran of the Stockton police force. To complicate the situation even more, Stephens was formerly known as Houston Sensabaugh, one of the most violent cops in California. He was forced to change his name after being involved in multiple shootings and civil rights violations; some of which were captured on camera.

Joe Silva, spokesperson for the Stockton police, confirmed that officer Stephens was formerly known as Sensabaugh but declined to elaborate on why he changed his name.

“He changed his last name for personal reasons, and we don’t have any further comment.”

God forbid one of these officers actually speak their conscience. Sensabaugh might be a terrible monster, but is every cop really a heartless monster who tows the company line regardless of what is right and what is wrong?

Community activist Aaron Paradiso had this to say about Sensabaugh’s name change.

“We know he changed his name. People want to know, if you’re not ashamed of what you did and you didn’t do anything wrong, why would you hide from who you are?”

Aaron has been organizing community actions in Stockton with the surviving family members of the victims of the Stockton police department for years. The group, although small has been a constant thorn in the side of the establishment, resulting in even more civil rights violations as the police try to shut them down. I attended one of these marches and caught a large group of cops, all dressed in riot gear, hanging out in a parking lot waiting to ambush the march.

Houston Sensabaugh has plenty of reasons to hide from who he is, but changing his name isn’t going to change who he is. The same as a tiger can’t change its stripes. He may think a new name means a clean slate, but the people of Stockton have long memories and aren’t prepared to let these human swine forget their transgressions so easily.

“It was obvious he was dead. I don’t think he deserved to die that way. The cops snuck up on either side and opened fire — boom, boom, boom, boom. The bullet holes were only through the windows. He had defensive wounds,” Hawkins said

Sensabaugh deployed his K9 on an 18-year-old man, who also suffers from a mental disability. His neighbor captured the incident on video. You can hear him in the video shout “She’s telling you he’s disabled” as the dog viciously attacks the young man.

I was present at the city council meeting where James’ mother presented his injuries to the council. The same night multiple activists condemned the actions of the Stockton police department and the violent tendencies with which they enforce the laws of Stockton. Aaron Paradiso and the sister of Gary Allen Hawkins both addressed the council that night as well. Ironically, the very same night the Stockton PD killed someone.

In another incident a Stockton woman was filming a police interaction. Sensabaugh happened to be there and he aggressively forced her out of the area. When she asked for his name and badge number, He replied, 2323, Sensabaugh, I’m famous look me up. The whole time he is slapping at her phone and complaining about the tiny camera light. When she threatens to sue him for treating her so aggressively he replies, “get in line.”

Those involved in the struggle for justice have tried everything to change the environment they live in, protesting on a regular basis and even offering a $10,000 cash reward for information leading to the firing or arrest of dirty cops in Stockton. Still after all of this, the only things that change are the names of the officers.

It’s not just shootings that plague the department but other abuses as well. Most recently, nine officers were caught on camera beating a young man for jay walking. The video went viral but there is no word on whether or not the officers will receive any discipline for their actions that day.

Fortunately former Stockton city council member Ralph Lee White has noticed the pattern of violence in the department and has been vocal with his concerns about the growing number of offenses that Stockton officers are involved in.

Obviously that man has a problem,” White said. “How many more kids are we going to have killed before we realize we have a problem? If the chief doesn’t take him off the streets and put him behind a desk, then we’re going to protest until he takes him off. He’s got to go.

It’s perplexing how one department can defend the actions of an officer whose conduct was so unbecoming of a public servant he had to change his name in order to avoid accountability for the multiple people who have suffered while being forced to interact with Houston Sensabaugh. So thick is the thin blue line that it will cover the transgressions of any officer, no matter how abominable.