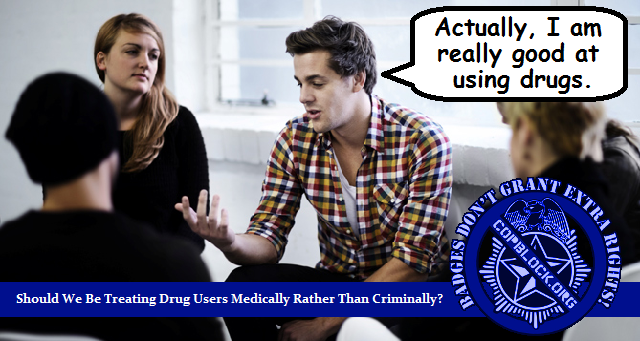 So-called ‘progressive’ politicians are often asked about how they would deal with the War On Drugs and their answer is almost always that we should be treating drug use as a medical issue rather than a criminal one. While this is a seemingly progressive response, it still suffers heavily from two very faulty premises.

The first premise is that drug use is Bad. The only politically acceptable narrative of drug use seems to stem from the puritan ideology that altering your consciousness with drugs is wrong. This value judgement is predicated on the experiences of some drug use having gone awry, then projected onto every drug, every user and every time they use. While there are people who cannot handle their drugs, there are people who cannot handle just about everything. Some people abuse cheeseburgers, others abuse religious ideologies. Some people abuse even love. Yet, it is obvious that it would be lunacy to ban those things to protect people from their own weaknesses at everyone else’s expense. But with drugs, this is exactly what government lead prohibition does.

The truth is that many people have gotten a lot of mileage in positive outcomes with drugs. Ecstasy, LSD and other entheogens have shown a lot of promise in therapeutic regards, both in personal and institutional settings. Cocaine and opiates have inspired some of histories greatest creative aesthetic accomplishments. Drugs do lots of good things, so to treat their usage as a disease is an ignorant conceit of naive puritans who have no meaningful experiences to base their misguided ideologies on, or of those whose own weaknesses and lack of self-control and awareness caused them to be bad at using drugs.

Secondly, these politicians and advocates for more drug treatment are incredibly ignorant of what drug treatment is actually like, especially the court-appointed variety. The standard path from drug use to treatment goes something like this.

The damage that treatment does to the individually monetarily and time-wise, as well as the corresponding stigma as a disease-carrier, is often more detrimental than the drugs themselves were. Drug treatment is big business. It is unlikely to turn away potential customers, yet they are allowed to be the gatekeepers of treatment requirements. This represents such a massive conflict of interest that treatment is no longer about health, but about profits. In the meantime it costs a great deal of money. Which becomes a huge issue when you are now forced to take time off of work to meet treatment requirements. That is assuming you were not fired when then company you work for had to let you go for violating their policies regarding the drug usage and legal activities of its employees. Treatment can literally ruin the life that you were doing fine managing while high on drugs.

The treatment itself is also of a quite dubious nature. If you remember sitting in a high school classroom getting lessons on the ‘facts and dangers’ of drug use by a gym teacher and DeVry graduate with a badge, you can picture the experience of treatment. Despite the fact that studies show that many intelligent people use drugs, drug treatment is aimed at the least common denominator, a disastrous consequence of the puritan ideas and superiority complex which frames all drug use as a subhuman activity. The information, which is itself problematic, is presented in a condescending and patronizing manner. Most intelligent and independent people dismiss such trite nonsense, meaning that it will often fail the people in our society whose work has the greatest net benefit and genuinely do need treatment.

The final reason that we cannot depend on our treatment centers to do much better than our prisons is that the dominate ideas about addiction may themselves be dead wrong. The current paradigm at the center of addiction models is the disease model. The disease model states that addiction is a biological issue. This is in keeping with the general scientific consensus that a materialist model of reality is reality itself. This sort of thinking is the geocentrism of our day and will soon be overturned by the true mavericks tackling the science of consciousness apart from the materialist model. Our addiction models rest on some basic premises which are themselves flawed. As those ideas filter into other branches of science, like medicine and then addiction, they become increasingly flawed. It is like beginning the childhood game of ‘telephone’ with the wrong message and then expecting to get the right one from the last participant.

Mavericks attempting to understand addiction are calling into question those old models. Rather than being a disease, they are suggesting that they are a manifestation of other cognitive processes, such as our ability to experience fulfillment or inability to make good choices. Therefore one does not directly treat addiction, but rather the psychological components from which it stems, which are different in every individual. Yet our current treatment is a one-size-fits-all affair.

Since it is this current treatment paradigm that politicians and advocates are suggesting we replace punishments with, there is a massive problem. These for-profit treatments ARE punishments which are based on pseudoscience that is then dumbed-down to the lowest common denominator. While I am inclined to believe that their stance is based on naivete and ignorance, predicated on somewhat honorable intentions, it is still a fact that this ‘solution’ is itself gravely problematic.

The real solution is to stay out of peoples business. If you want to create treatment centers not predicated on profits and out-dated models of addiction, and then offer that as a public service to anyone who wishes to use them, that is great. You cannot treat people if they do not want it, anyway. Making treatment more realistic and available will help those who genuinely need it. Yet forcing treatment on everyone who is caught using drugs is not just unwise, it may actually be more harmful than helpful. It is time we leave our personal ideas and laws about drugs off of other peoples bodies and minds. We may delude ourselves that it is a friendly interference, but friendly interference is only a meaningful concept to those interfering. To those interfered with, no amount of good intentions or positive rhetoric will change the fact that it is better to just be left alone.

Being high should not be a crime, and a badge is not permission to censor the consciousness of your fellow human beings. Our minds are our most intimate property and they will never be safe from widespread, institutionalized violence or interference until we abolish the police and stop making it profitable for them to violate us at the most primary levels of our existence.