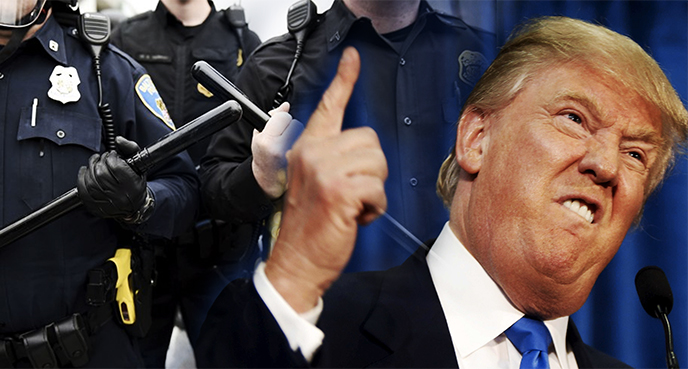 I – and many of the regular contributors here at CopBlock.org – describe ourselves as “Voluntaryist” instead of the usual political divisions of Democrat or Republican. Being a Voluntaryist means that you believe voluntary interactions between people are prefered to man-made rules and regulations (like laws). This, IMO, simplifies things because one is allowed to live their life as they see fit without pressure, force or (at times) loss of life due to the man-made laws that might not fit all situations.

How does this fit here? Because that’s not what Donald Trump (or any political candidate ever) wants. No, they feel like they can run your life better than you can. They know what kind of education you should have, medical treatment you need and what type of jobs (benefits and pay) you should have. The all mighty leaders of the ‘freest country’ on the planet know how you should live your life better than you do. Right? That’s why we vote for them, to do the stuff we’re too busy to do.

Including blindly supporting the police.

Which is what Donald Duck, shit, I mean Trump wants you to do in his most recent ad seeking your vote to run your life. See below.

Donald starts with saying that the police in this country are not appreciated and I agree with him on that but nothing more. It’s the only factual statement he made and the reason people dislike the police is obvious, just not to him. While the video starts with this acknowledgment it never really touches on why. Instead Donald goes into the usual CopSucker defenses of there being a few ‘bad apples’ and media over exaggerations (one of his favorite scapegoats).

As Georgia Sand points out in her post, “It’s A Few Bad Apples Or Police Departments Or Maybe Entire System“, the “Bad Apple” theory when applied appropriately actually supports the position that “all cops are bad.” From her post:

This is pretty much how every police apologist begins the argument, when faced with instances of law enforcement malfeasance. While there are a slew of familiar excuses for various acts of police abuse – “just doing their jobs,” “the victim was drunk,” “the victim asked for it because he failed to comply,” etc., those become difficult to apply when police behavior is so inexcusable and abhorrent that even their staunchest defenders are at a loss for words. Examples of this would include shooting unarmed people in the back, tasering children in the head, killing children, or beating pregnant women, among others.

In those situations, police-worshippers fall back on, “It’s just a few bad apples.” Alas, cop-lovers who lazily fall back on this term forget the full idiom: “A few bad apples spoil the whole bunch.” Applied correctly, it would seem this saying actually supports what police critics have been arguing all along – that the whole bunch is inevitably rotten by this point.

While Donald might want to be more careful with the use of idioms in the future, he might want to drop the word ‘fact’ from his campaign vocabulary all together. When Donald says, “the fact is they [the police] do an incredible job” he really means that as his opinion. There’s no proof that the police are doing a good job, or that they prevent any crime from happening what-so-ever. Of course you can see that more laws are being passed, prisons are full and enough fear is pushed across the TV to keep you living in fear. Furthermore, he goes on to say that we need to give police FAR MORE respect. Give respect? Doesn’t the saying go, “respect is earned, not given?”

If people are currently unappreciative, disrespecting and untrusting of police then maybe a person who’s looking for votes should talk about finding out the reasons for why that is? Or by offering real solutions to solving these problems, like ending prohibition of certain products or ending the government’s monopoly on protection services, would seem like logical steps. Instead Donald goes on to say that you wouldn’t be sitting here, having the ‘lives you have’ (as if yours and my lives are anything like his) without the police.

Or maybe we’d have a better life without the endless funds spent on the prison systems, militarization of police and stupid political elections. Maybe the profession of police officer is a look into the crystal ball of future presidents (and other government workers). Today appreciation for the police is down and who knows, by tomorrow maybe know one will appreciate, respect or trust the person who hold the title of “President of the United States.” I’m sure we’re atleast a tad bit closer to that reality if, or when, Donald Trump is elected.

I encourage you to stop falling for the two party system fallacy. Especially those of you, the police, that this video was target for. Donald Trump is going to give you the worst working conditions of your life. If you value yourselves and skill sets as people who provide some sort of protection to others, DO NOT GIVE YOUR VOTE TO THIS MAN. Instead, start your own business and offer your skills/services directly to the customers. Only then will you get the respect and appreciation you DESERVE!