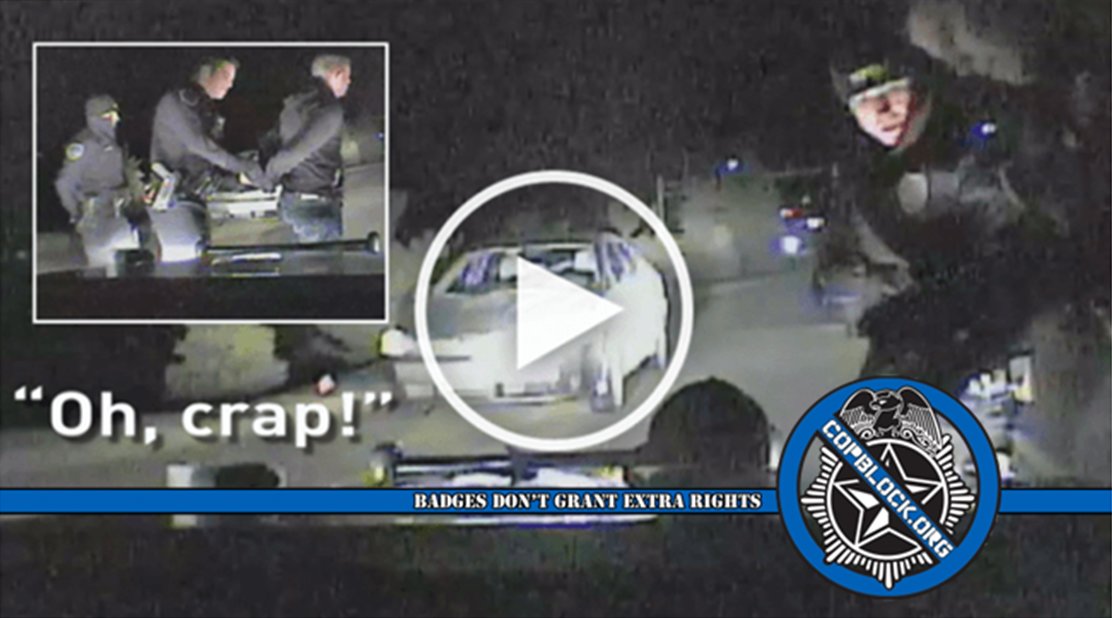 Dash-cam video has emerged showing two Minnesota officers with the Blaine police department detaining a drunken man they found in a car with his penis exposed, only to allow him to leave after they realized he was a cop.

The officers had responded on Nov. 7 to a call of alarm at the Lexington Avenue Fleet Farm where they found a car running in the parking lot with a man passed out in the drivers seat.

According to police records, the officers spied “open containers of silver Coors Light cans in the passenger seat…” and began banging on the door to rouse the occupant.

The dash-cam video shows the cops yelling at the man to “wake up!” before they finally get his attention and order him to exit his vehicle.

The footage shows the disorientated man uable to follow basic requests before officer Brad Nordby can be heard asking the driver, “Can you open it? Ok, open the door.” Nordby’s partner, officer Brandon Fettig then says, “Oh, great. His penis is out of his pants.”

“Why don’t you zip up for me,” Nordby tells the man. Instead of opening his car door however, the driver revs his engine in defiance – but luckily, the vehicle was not in gear.

After the man eventually exits his car, the officers ask him to perform field sobriety tests, which he has difficulty comprehending. He is then seen stumbling while he attempts to walk a straight line.

The cops administer a breathalyzer test, and the man – identified as William Monberg – blows a .202, according to police records. That is more than two and a half times the legal limit in Minnesota.

“William, right now I’m going to place you under arrest for DWI,” officer Nordby can be heard saying in the dash-cam footage as he handcuffs Monberg and places him in the back of a police car.

What happens next however, is something that should alert every individual to the reality of government police enforcement: political masters and even run of the mill cops are often exempt from having to abide by the law.

The footage shows Norby and Fettig examining Monberg’s wallet before one of them exclaims, “Oh crap!” and the two turn off their microphones and step out of view of cameras.

The officers had just found out that Monberg was a fellow cop who works for the Columbia Heights police department. Fortunately for the public, a camera in the back of the patrol car shows what the cops may have otherwise gotten away with.

They are seen letting their comrade out of the vehicle and taking his handcuffs off before, instead of taking him to jail, they arrange him a ride home. Monberg was not arrested, his car was not towed, and no police reports were made by the officers at the time of the incident.

Monberg can even be heard in the footage asking the Blaine officers if the incident would be recorded into the police department’s Computer Aided Dispatch system.

“You know what’s in the CAD notes on that?” Monberg asks. “Nothing,” one of the cops answer.

The cover-up lasted for a month and the officers might of thought they were in the clear, but after Blaine police chief Chris Olson assigned an investigator to look into what transpired on the night of the incident, officer Monberg was charged with a DWI in December.

“In this case inexperienced officers made a mistake. It’s not acceptable,” Olson said. “My expectation is fair and impartial policing and that didn’t happen. We need to treat people fairly and it shouldn’t matter what they do for a living.”

Monberg was suspended from the Columbia Heights police Department for 30 days following his first court date back in January where he entered a plea on not guilty to DWI. His next court date is scheduled for March 2.

It is unclear what, if any, disciplinary action officers Nordby and Fettig faced for their selective enforcement. Calls made to the Blaine police department by this investigator were not immediately returned.