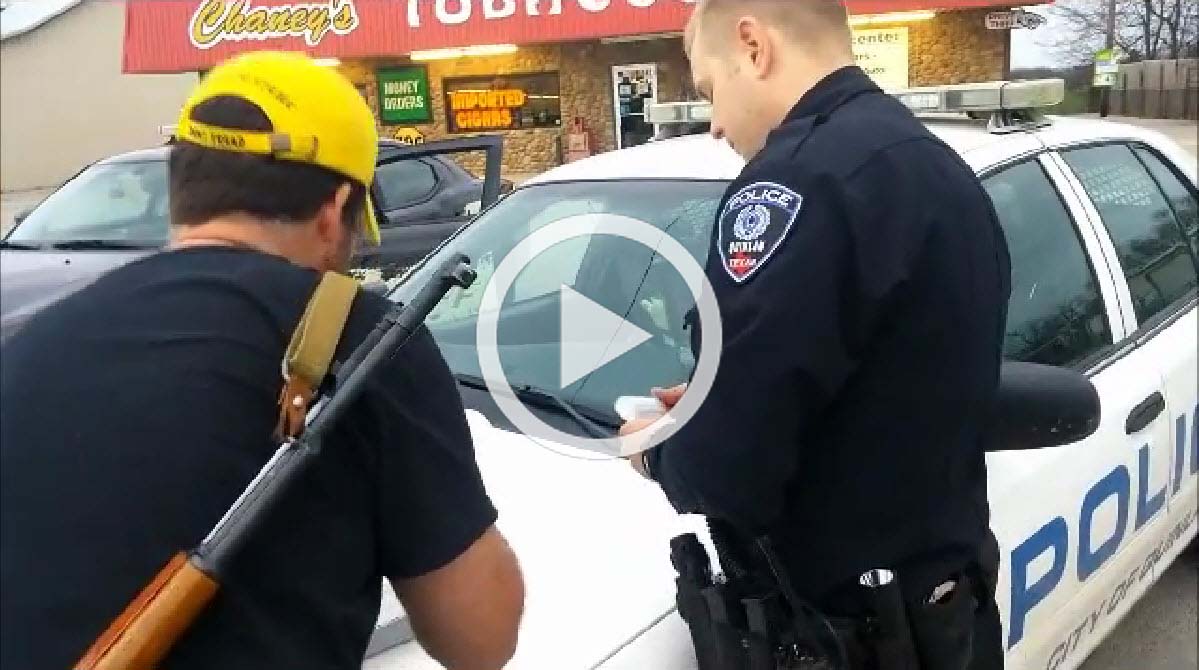 Last month I wrote about the Texas CopBlockers who were about to go on trial accused of “Interfering with Public Duties.” What these charges mean are that Kenny Lovett’s and Joseph Tye’s cameras and holstered firearms (two things MANY cops have themselves) were an interference for the officers who were trying to conduct a felony traffic stop. That’s right. The police claimed that since men with guns where filming them they were unable to successfully do their jobs. Even though the ‘felon’ at the traffic stop was arrested without incident.

Both of the duo’s day in court has been pushed back a number of times. In fact, Tye’s trial was once again postponed but Lovett had ‘his day in court this week.’ On Tuesday he was found guilty by a jury and was sentenced the following day (yesterday). The judge handed down a 90 day sentence citing Lovett’s “Cop Watching” activities and lack of remorse as justification for throwing the book at him.

Lovett was immediately taken into custody but was bonded out by supporters, including at $100 donation from the CopBlock Network, pending his appeal.

Lovett is the second CopBlocker this month to be found guilty of filming the police (yes, I know they claim interference but that’s bullshit). Deo Odolecki, the founder of Greater Cleveland CopBlock, was sentenced to 240 days for filming the police too. Both of these guys did nothing more than stand up for rights the very courts that convicted them claim to provide.

While we all know the “war on cops” is a fallacy there seems to be a vendetta against CopBlockers. While that might seem a bit of a stretch for the CopSuckers reading this the statements of several district attorneys who have prosecuted CopBlockers tells that tale exactly. I myself have had maximum sentences handed down to me for chalking the police and recording conversations. During sentencing in both those cases two separate district attorney’s told the judge that jail time was being sought not only for the ‘crimes’ I committed but to deter me from doing such activities in the future. This was also echoed by those who prosecuted Odolecki and Lovett.

Such statements prove to me that CopBlockers aren’t solely prosecuted for their crimes but for their beliefs and the fact that they’ll act on them. This is absolutely absurd and dangerous. This means that the justice system is punishing people for things they have YET TO DO. They hope that this will crush dissent, yet, what the courts don’t realize is that each time they do this to a CopBlocker they make more CopBlockers. That none of us really want to go to jail but if we do, we’ll make the best of it. We’ll share our beliefs with those behind bars, we’ll write the outside world to let them know of utter fallacy behind the “House of Corrections” and we’ll inspire more people to point video cameras at government police.

You can lock up the CopBlocker but you can’t stop the CopBlocks. Help us send that message to those who work to cage the CopBlockers. Share this post (and others), join the CopBlock Network and consider helping Kenny Lovett with his upcoming appeal. He already put up $1,500 to get out on appeal bond and you can help lessen that expense (or assist with appeal expenses) for him and his family (including his new, one month old today, son). DONATE HERE.

VIDEO OF KENNY’S ARREST BELOW: DOES THIS WARRANT 90 DAYS IN A CAGE???!