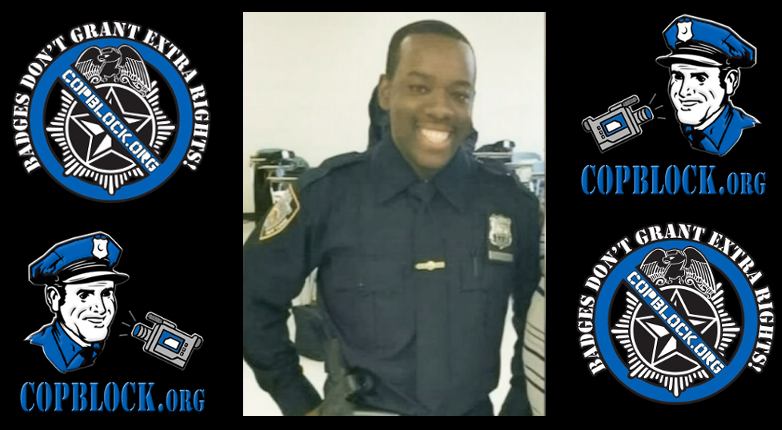 Last week it was reported that Vincent Harrison, an off duty NYPD cop, was killed by a hit and run driver after he had rear ended another car. At the time, it was also reported that Harrison had his gun drawn when he was struck, but no details were released beyond that.

However, since then it has come out that Officer Harrison was not only verbally and physically threatening the woman (whose two year old was in the vehicle at the time) he had run into, but also that he was at least partially responsible for his own death, having walked backwards into the roadway in the process.

According to a local news report, Harrison told another driver “I can kill you right now” in a bizarre scene moments before his death.

Before the fatal crash, Harrison got into a minor accident with another driver, which prompted him to exit his car and speak with her. Initial reports noted that he had drawn his gun drawn (sic) as he approached the other driver’s car, but the nature of the conversation was not immediately clear. At some point as Harrison stood on or near the roadway, a third driver named William Espinal-Mejia allegedly struck him with his Infiniti and kept driving. Harrison died on the scene.

Citing “authorities” and other unnamed sources, ABC 7 is now reporting that Harrison threatened the second driver before he was hit.

Authorities say Harrison had rear ended a vehicle driven by a 26-year-old Rahway woman who was traveling southbound in the Turnpike’s right center lane. Harrison got out of his vehicle and walked up to the other car, occupied by the woman in the driver’s seat and her 2-year-old son in the back.

The two reportedly got into a verbal dispute, and sources say Harrison pulled his service weapon and pointed it at the woman, who was remained (sic) seated in her car. He allegedly yelled words to the effect of, “You don’t know who I am” and “I can kill you right now” numerous times.

As Harrison backed away from the woman, he stepped into the Turnpike traffic lanes and was struck by a passing vehicle.

The man driving the car that killed Officer Harrison, William Espinal-Mejia, is facing a felony charge based on the fact that he didn’t stop and that certainly is reasonable. However, based on the behaviour of cops in the past in road rage situations and the fact that Harrison was threatening a woman over an accident he was at fault in even with a small child in the car, it’s equally reasonable to wonder if Espinal-Mejia’s unintentional act didn’t actually prevent a completely innocent person from being assaulted and possibly even murdered by Harrison.

In fact, it tells you something about the attitude of police and their assumptions about whether they will be held accountable for their criminal actions (upto and including murder) that just prior to being killed Officer Harrison was yelling at the woman things such as, “you don’t know who I am!” and “I can kill you right now!” That’s not just empty bragging or false boasting, either. That’s learned behaviour based on past experiences and future expectations. The history of police “accountability” is quite simply that if they don’t make the mistake of walking backwards into traffic, they literally can kill you and get away with it. And they know that.