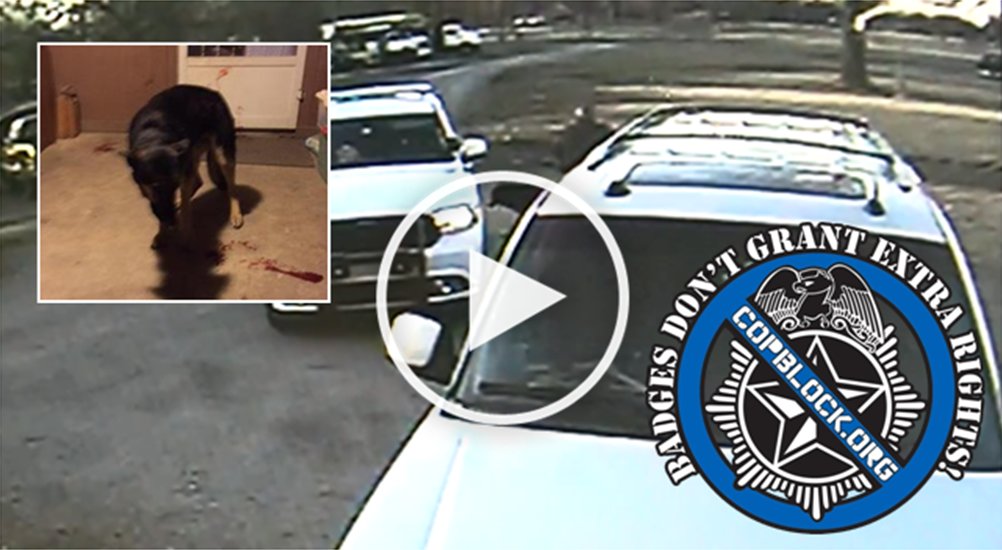 After coming home from church on Wednesday night, an Owasso, Oklahoma family was disturbed to find their family dog bleeding on the porch from a gunshot wound.

The German Shepherd named Bruno had suffered a single gunshot wound that shattered its shoulder from a deputy with the Rogers County Sheriff’s Office. Shockingly, instead to seeking medical attention for the animal, the officer simply attached a note to the front door and left it to suffer.

The note relayed this message:

We were investigating a crime and a dog attacked our deputy. The dog was shot and we need you to call us.

“They left him bleeding. He was here almost three hours bleeding,” the dog’s owner, Angie Laymon said. “It’s just not fair. He’s part of our family.”

Laymon said the animal was first found by her young children who called to tell her what happened. She said she then called the sheriff’s office which told her that the animal attacked the deputy.

Police say the deputy was responding to a shots fired call in the area and approached Laymon’s home to investigate. Surveillance footage recorded at the residence shows the officer pull up in the driveway and exit his vehicle when he is approached by Bruno, who is trained to protect the property.

The deputy was not bit, but police maintain that the officer was only acting in self defense when he opened fire.

“There’s a lot of things that could be asked,” Rogers County Sheriff Scott Walton said. “Why didn’t he Tase him, why didn’t he pepper spray him? An officers weapon was the first thing that he drew. We don’t have time to go through this use of force ladder.”

On a GO FUND ME page that has been set up by Laymon to help cover Bruno’s medical expenses, she calls what happened to her pet “senseless and cruel.”

Laymon says in the page:

There was a call to the Sheriff’s office from a home about half a mile south of us stating they heard gunshots and believed a bullet struck the side of their house. Deputies responded and began investigating. After determining that the shot came from the East, they sent a deputy to question the property owner to the East.

Instead, for reasons yet to be explained, the Deputy turned into my driveway. My property is North, with other properties being between mine and where the call came in. My property does not border either of the properties in question – about half a mile from both and in a different direction. Furthermore, there is a creek and wooded area between my house and my neighbors and several buildings between me and the property in question.

The Deputy drove down my long driveway, pulled in behind my vehicle and exited his patrol car. Based upon what I have been told, and also his body language and facial expression – the Deputy heard and saw Bruno barking a warning. Bruno is very protective of our home and family. The Deputy chose to continue towards the house – my German Shepard barked loudly and ran in a wide arch. Within 4 seconds the Deputy shot my dog.

According to the Deputy and confirmed in a video taped interview – my dog never touched the Deputy. My dog did bark loudly. The Deputy said he felt threatened and he panicked and shot the dog. He didn’t pepper spray the dog, he didn’t tase the dog… instead he used lethal force and shot my dog while Bruno was doing his job and protecting our property.

Bruno was taken to Emergency Animal Hospital where the bullet was found lodged in his shoulder joint. Laymon says the shot shattered two bones and the animal now requires a shoulder replacement operation or an amputation of his front leg to fully recover.

“The Deputy left my dog bleeding and dying,” Laymon said. “If Rogers County does the right thing and they reimburse veterinary expenses, then remaining funds will be set up as a scholarship to provide life-saving funds for pets whose owners are financially unable to afford the care.”