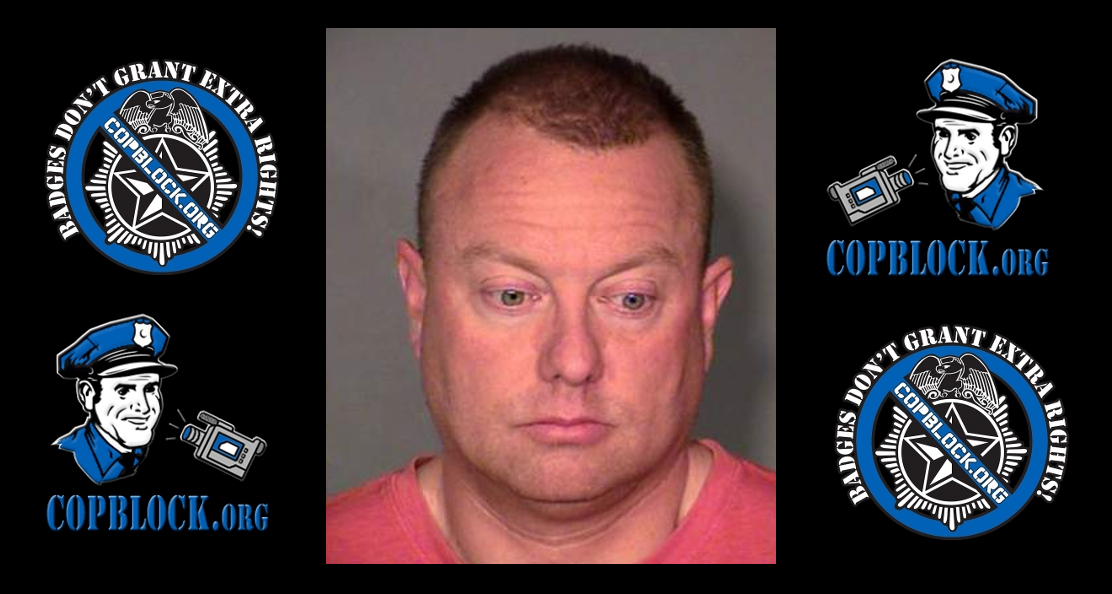 In January, I posted about the arrest of James Burt, an officer with the Las Vegas Metropolitan Police Department, who was arrested for beating, choking, and kidnapping his girlfriend. Officer Burt had, of course, previously been allowed by the Good Cops at the LVMPD to walk away without any sort of meaningful repercussions after being arrested for beating his now ex-wife in a very similar, if not identical, attack four years prior. (For some reason the community service that he was ordered to do as his only “punishment” that time didn’t teach him a lesson.)

In February, details in his latest abusive tirade were made public, including the fact that he threatened to kill her as he was choking her and dragging her through the house. The other details do nothing but make Officer Burt sound even more psychotic than your average violent maniac. Apparently, it escalated from a text message argument, to a long list of “discussion topics” and finally to an uncomfortable attempt to avoid talking to the crazy guy in the other room before the violence started in earnest.

A Metropolitan Police Department officer told his live-in girlfriend, “You’re going to die,” as he dragged her by the neck across their living room floor and slammed her onto a couch, she testified in court Friday.

The 41-year-old James “Jimmy” Burt, a 10-year veteran of the force, faces four felony charges: one count of first-degree kidnapping, two counts of domestic battery by strangulation and one count of coercion with force or threat of force.

Kelly Ryan testified during a preliminary hearing that she arrived home at 7:45 p.m. Jan. 11, in the midst of a text message quarrel with Burt, who confronted her the moment she stepped through the door.

He held a pad of paper that contained two pages of “topics” in their relationship he wanted to discuss.

She walked into the kitchen, where she started to clean dishes and tried to stay quiet.

“You’re shutting me out,” she said he told her. “We need to talk about this.”

Suddenly, he approached her at the sink, stood face-to-face and yelled, “Get the f–k out,” Ryan said as she described the start of a two-hour struggle in their southwest valley home.

She grabbed her cell phone and car keys and walked to her car. He had thrown her shoes across the garage. As she slipped into the driver’s seat, he yanked the door open, pulled the garage door opener from the visor and hurled it against a wall.

The 6-foot, 230-pound Burt pulled his 5-foot-1-inch, 125-pound girlfriend out of her car, wrapped his right arm around her neck and left arm around her body, dragged her inside and said, “I wasn’t going anywhere,” she testified through tears.

He wrapped his hand over her mouth. She said she had trouble breathing.

She heard a crack and thought he had broken her jaw. She escaped his grasp, tried to run back to the garage, and “he threw me on the other couch,” she said.

He put his hand over her mouth again, and yanked her body off the floor, with an arm still around her neck. She said her vision began to blur.

“At this time, he said — I don’t have the exact words — ‘You’re going to die right here’ or, ‘We’re going together right now,'” she testified. “And he’s covering my mouth, and I’m thinking I’m going to die.”

Then the inevitable abusers’ phony laments began (obviously not for the first time):

Eventually, she said, Burt started to calm down and pleaded with her, “telling me he needs help.”

She convinced him to let her go, and she made her way to a hospital, where she was questioned by police.

There had been other attacks, too, she said, that she did not report to authorities “out of embarrassment… and I thought he wouldn’t do it again.”

Whether the healthy dose of community service Burt is likely to receive for this violent, abusive episode before he is reinstated to the Las Vegas police will deter him from beating the next person he temporarily hides his true nature from remains to be seen. However, since the spouses and family of police officers are as much as four times as likely to be abused by them vs. the general population, this isn’t the last time “…and I thought he wouldn’t do it again” will be uttered in reference to Officer James Burt.