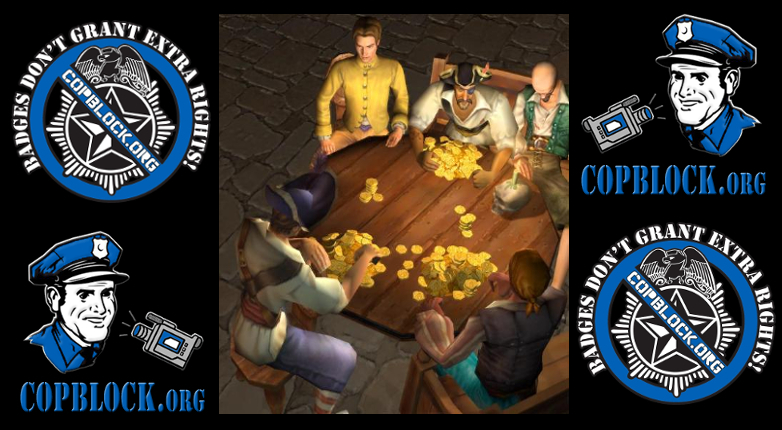 The links for this post were shared with the Cop Block Network, via an anonymous submission to the CopBlock.org Submissions Page. The person submitting it did include this comment with the submission:

That’s obviously an opinion based statement, but I personally don’t have any quantifiable reason to doubt its validity. So that is something you’ll need to research for yourself.

The story stems from the City of Carmel Indiana’s use of an invalid city ordinance to issue as many as 8,000 tickets for the express purpose of generating revenue. The validity of the Carmel Road Pirate’s scam was originally exposed by a citizen who fought their own citation. Interestingly enough though, the issue that seemingly makes it invalid is based on the fact the city didn’t share the ransom money they collected from drivers with the county and state and instead “pocketed the cash.”

Rather than distribute the money collected by traffic fines with the county and states as required in many cases–the lawsuit accuses Carmel of pocketing the cash in some scenarios.

Bielski is the Indianapolis attorney behind the federal class action lawsuit filed against the City of Carmel.

“What they did is they took state code and they hijacked it and pretended it was theirs and kept the money. That’s inappropriate,” said Bielski.

The lawsuit argues that Carmel adopted the existing Indiana state law for traffic violations and is wrongfully writing tickets under Carmel’s §8-­2 ordinance.

“You can’t duplicate state law. They are doing something directly contrary to state law,” said Bielski.

Bielski says he is in the early discovery phase of his class action lawsuit but he has reason to believe Carmel is using this ordinance for financial gain.

“In life usually your answer is follow the money. When you pay a ticket you expect the money is going to go where it’s supposed to go. You don’t expect them to pocket it,” said Bielski. So the basic gist of the lawsuit is that the city passed an ordinance that duplicated a state law allowing them to write tickets that rang their cash register instead of going into the governor’s slush fund. Being that the statement comes from the lawyer bringing the suit, it might just be a legal argument and not based on any sort of actual reality outside of a courtroom, but Bielski’s stated complaint is an interesting one.

He states that it’s wrong for the city to pass such a law because, “When you pay a ticket you expect the money is going to go where it’s supposed to go. You don’t expect them to pocket it.” What he’s essentially saying is that the wrong thief ended up with the bag of loot. As if the victim of a mugging cares which gang shakes him down as he’s heading back from the neighborhood Quickie Mart.

In fact, the man who originally contested the ordinance lays it out even more clearly:

“This is a very simple issue. Carmel violated state law to try to usurp the state’s authority and divert these funds to Carmel, and that’s the only issue at play here,” (Jason) Maraman said.

Obviously, the overall potential effect of having as many as 8,000 people getting their stolen money back is a good (and rare) thing. However, going forward this just means that the City of Carmel’s crew is going to have to cut the Hamilton County Capo in on the take before kissing the Godfather of Indiana’s ring. Nothing of substance will change for the people they will continue shaking down in the process.