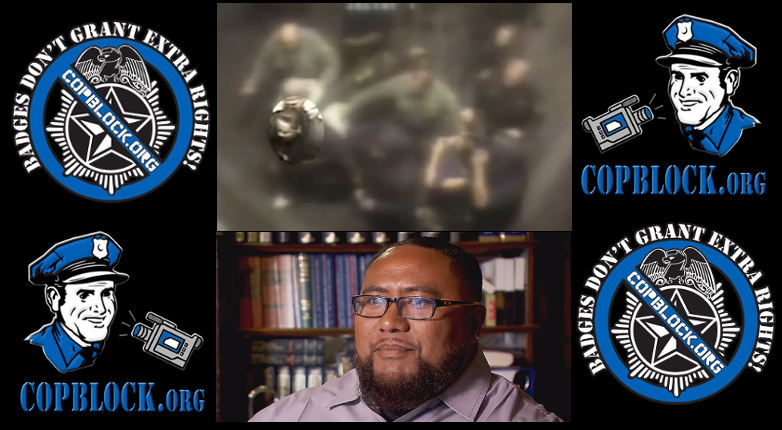 Ian Tuuamalemalo, a man who was visiting Las Vegas from Southern California, has filed a police brutality lawsuit over an incident in which he was violently attacked by a group of officers from the Las Vegas Metropolitan Police Department. Tuuamalemalo had been attending a reggae concert at the Hard Rock Hotel and Casino in January of 2014 when the assault occurred.

Although it was claimed in the police report that Tuuamalemalo was acting aggressively, he was actually walking away from the officers when he was grabbed from behind and then punched in the face by one of the (as yet unidentified) officers. The rest of the officers then jumped on him and he appears to have been knocked unconscious before being carried away. Charges against him were later dropped.

The beating of Tuuamalemalo is shown on a surveillance video (embedded below) from the casino. Cal Potter, a local civil rights attorney who is representing Tuuamalemalo, has described the altercation as “an organized riot on the part of the police.” In addition, Potter states that the LVMPD ruled that a “policy violation” had been committed, although no details of what exactly that violation was or by whom it was committed had been provided.

“They could have killed me,” he said.

The video shows him being tugged on his shirt, followed by what may be a punch. He is shown being taken to the ground by police, restrained and carried out. Tuuamalemalo appears to be passed out.

The incident occurred January 26, 2014. The 34-year-old man says he was visiting from California for a reggae show at the Hard Rock, when he had a run-in with Metro Police…

They claim this is excessive use of force by police. Since there is no audio, it is unclear how this started and what was said between police and Tuuamalemalo.

A Metro report describes him as aggressive and refers to his size. He says, at the time, he was nearly 380 pounds, and stands 6’1”.

He says he was walking away, when someone tugged his shirt.

“I just remembered I turned around. Right when I turned around, that’s when I seen the officer. He just had a, just a full swing, just takes one to my face,” he said.

“There is no excuse for that,” Potter added.

Potter says he’s concerned about the tactics used to restrain his client.

“In a perfect world, the United States Attorney’s Office would pick up this case, and prosecute it and indict the officers that were involved,” he said.

Tuuamalemalo was arrested for resisting a public officer and destroying property at the Hard Rock. The charges were later dropped.

He says he complained to Metro Police. He received letter (sic) in January 2015 – approximately a year after the incident – stating a policy violation was found to be sustained. It does not state, however, what that violation is and who may have been held accountable.

“There is a blue wall of silence that we are all aware that work in the police misconduct business and civil rights violations,” Potter said…

Potter says he believes the person who may have thrown a punch is a Metro Police sergeant, but 8 News NOW could not confirm that.

Obviously, we all know this isn’t a “perfect world,” where cops are actually held accountable for their actions. That is certainly not the case for Las Vegas area police departments, where cops are free to do pretty much anything they want without any realistic fear of repercussions. He’s quite right that they could have killed him (on video) and easily gotten away with it.