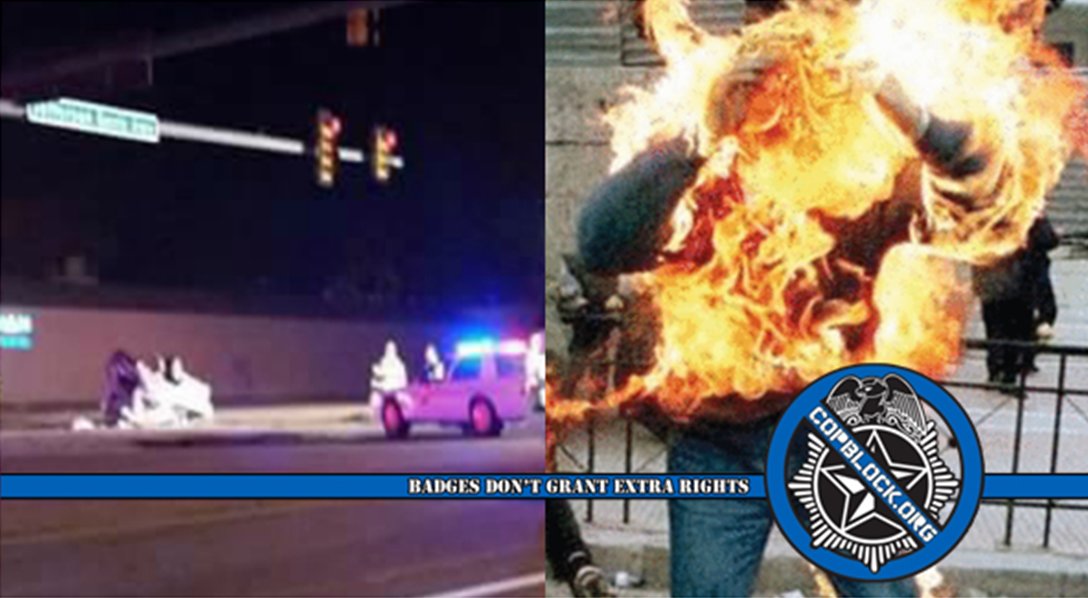 A lawsuit filed in Richmond City Circuit Court in Virginia says a Chesterfield County cop ignored orders against discharging his Taser and deployed it anyway, setting a gasoline soaked man on fire.

According to police, 26-year-old Miles November eluded officers and drove without a license after officers pulled his vehicle over for a suspected DUI during the early morning hours of Feb. 8, 2015.

Police said they had November’s 2012 Volkswagen sedan stopped in the 7200 block of Jefferson Davis Highway, but when an officer walked toward the car, he drove away heading south toward the intersection of Chester Road.

Officers pursued and November lost control of the vehicle, flipping it multiple times over a distance of 100 feet. He was trapped inside unable to get out and police said after they freed him from the wreckage, he became combative and tried to fight with them.

A strong smell of gasoline permeated the air at the scene of the crash and November was covered in the flammable liquid. The lawsuit says that even though police were alerted to the potential fire-hazard, officer Ryan Swope discharged his Taser anyway, setting the man ablaze.

“As a result of the fire ignited by Swope, November suffered full thickness burns on approximately 86 percent of his body,” according to the suit, and underwent 35 surgeries while spending more than six months in the intensive care burn unit of Virginia Commonwealth University Medical Center.

During his stay in the hospital, November contracted septic blood poisoning and required a tracheostomy due to respiratory issues and kidney failure.

“For many months he was completely unable to feed himself, clothe himself, stand up or walk and was even unable, without significant assistance, to sit up in his bed,” the lawsuit says.

“Even now, a year after Swope’s use of the Taser engulfed him in flames, [November] has limited use of his arms and legs,” the suit continues. “Almost his whole body is horribly scarred and disfigured. . . He will never recover from the scars and impairment to his body and mind.”

The lawsuit asserts that November has already amassed more than $6.5 million in medical bills and will require a lifetime of care. It is seeking $95 million in compensatory and punitive damages for the claims of “gross negligence, battery, and breach of assumed duties.”

“Swope knew and/or reasonably should have known the use of a Taser to apply a high voltage electrical spark to an accident victim in the vicinity of likely flammable substances involves extreme danger and a high likelihood of causing serious injury or death,” the lawsuit states.

Chesterfield County police have not commented on the pending litigation but a retired cop with the department has claimed that Swope “had no way of knowing whether [November] had been exposed to gasoline.”