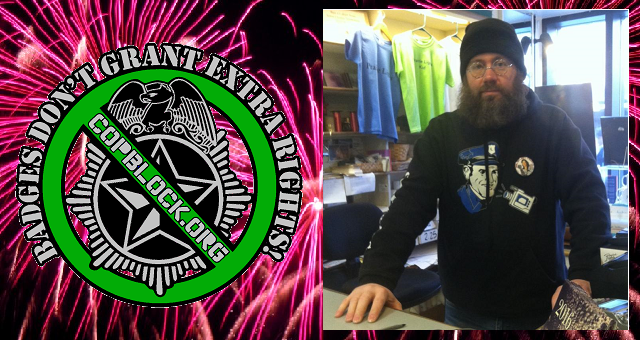 A little over a year ago I was an unknown writer of mostly fiction hoping to eventually find an audience to share my passion with. A friend of mine on Facebook told me about a post from Ademo Freeman, who was looking for new writers for CopBlock.org. Having been an outspoken critic of police for many years I jumped at the opportunity. An email, a few instant messages, and a phone call later, I was in! I cannot tell you how excited I was. But also nervous, because I needed to learn about a million things about the internet that I had no clue about to pull it off. My own site, AdvancedApe.com, was a relatively simple affair where I just flopped out stories with no real concern for site-building concepts that make a website more visible and successful. But I learned pretty quickly and was soon even doing analytic research on site statistics.

My very first article was a reposting of a fictional satire piece from my site that I had done on a future dystopian total police state. From there I worked on news stories, mostly just rehashing information from multiple sources and putting it all together. After a handful of those I did my first original editorial, or think piece, regarding the dangers of skewed ideas about masculinity and how they contributed to the police state. I really enjoyed writing that piece and so I began to intersperse more of that sort of thing with news stories. In less than three weeks I had several stories under my belt and wrote one of my favorite pieces discussing the police state through the lens of my Discordian religion. Right after that I put out a story that I had put a lot of work into with multiple sources compiled from a messy pile of sometimes indecipherable information, which probably stands out as the closest I will ever come to being a true investigative journalist. After a few more news stories I wrote another favorite of mine about how scientism, a topic I wrote a lot about before I began writing for CopBlock.org at another site I ran, contributed to the problems of the police state. Just before the end of my first month there I wrote my first piece regarding police issues in my own community.

In the next month I wrote about how to deal with cops in your family, how the police state goes against Christian ideas and values, why more women were needed in our movement, when trolling becomes activism, how the Baltimore riots were valid revolutionary acts when compared to those of this countries founders and did my first piece of satire here.

Over the following five weeks I continued to hone my skills and wrote prolifically. Some highlights include:

In June a young man named Ryan Bolinger was killed by Des Moines, Iowa police for ‘walking with a purpose’. This was too close to home and it really got under my skin so I decided to leave the comfort of my keyboard for some live action activism. I organized a protest at the DMPD HQ. Ademo and Deo drove over from Ohio to join me and I got to meet two really great guys who I previously only knew from internet contact. The protest drew a good crowd and had decent media coverage, but Ryan’s death has still not been met with any kind of reasonable response by those involved.

This article attracted the attention of the mother of Autumn Steele, who had been killed earlier in the year when a cop trying to shoot her dog slipped and shot her instead. I have continued to report on this tragedy and staged my second protest in January on the anniversary of her death. And I will continue to fight for justice for Autumn in any way that I can.

Over the next few weeks I continued pumping away, having earned a place among the CopBlock.org contributors as a solid member, with mutual respect and friendships forming. These included:

About this time I became an editor three days a week for the website. This, as I soon found out, was a lot of work and anxiety. Balancing breaking stories with allotted schedules and peoples concerns was a constant task. I enjoyed this for the first month or so. I also was on the pulse of police activity and became a fast draw with breaking news stories. But after a few months I could no longer bear the burden, and worse yet, I felt these duties were taking me away from my writing. Especially of think pieces. But I did get some good work out during this time, nonetheless.

At this point I quit editing. Over the last few months I had learned a lot in a short time. I learned about creating graphics, internet functions and issues, social media savvy and a lot about myself. At the same time there were some big changes being made in how the website was run, things that I was pretty concerned about. I pondered walking away altogether, but decided to give myself a bit to see if these changes were workable and if I was still up to the task. My news stories became infrequent. I began spending more time writing for my own website and also created UnicornWorld.org as an outlet for political writings outside of police state issues. I did settle back into a place where I was comfortable continuing on as a CopBlock.org contributor, and was able to focus more on think pieces and criticisms of police culture both inside and outside of that profession.

I also became the resident expert in a trend of people’s negative workplace interactions and refusal of service to police. Staples Office Supplies. Marriott Convention Center. Starbucks Coffee. Redrock Canyon Grill. Whataburger. Which eventually resulted in: Should You Personally Refuse Service To Police Officers At Your Workplace?

By mid-November I could no longer hide from something which had been increasingly bothering me. I was adding to the narrative of police accountability, a message that I found to be dishonest and impossible. I could no longer pretend police could be held accountable. I explored all of the reasons why that avenue was futile and could no longer bear to present a message I knew was a lie. I made my initial case in a trilogy of articles.

Since then I have incorporated that message into almost all of my writings and expanded on it in a myriad of ways. I have also been advocating to other CopBlock.org contributors to join me in the field of abolition and abandon the accountability message altogether, which has been met with varying degrees of success.

The following articles are highlights between then and now.

My final article in my first year of CopBlock.org was an experimental piece of reality fiction:

Good Cop or Bad Cop? A Choose Your Own Adventure Story

It was a lot of work and was also probably the least read thing I have ever written for CopBlock.org

My year at CopBlock.org has been a great experience in so many ways. I wrote 304 articles here (on top of my other writing projects) in that time. I learned a lot of new things and acquired lots of new skills, while making a lot of great friends. I have honed my writing chops and gained more exposure in that capacity. While I get frustrated with our audience and other aspects of CopBlocking from time to time, those often turn out to be great learning experiences themselves, which add to my own personal growth and evolution. And while it is unlikely I will ever repeat the prolific nature of that first year, those tired of my writing here will be disappointed to know that I plan to stick around for awhile yet. I look forward to doing so until every badge has been melted down and its metal turned into something useful that can contribute to the prosperity and peace of humanity.

Thank you all for your readership and support. Without you I am just a guy pissing in the wind with a lot of fancy words and outrageous but reasonable ideas. Please like the Joshua Scott Hotchkin Facebook Page where you can read all of my writings from all of the websites that I contribute to.