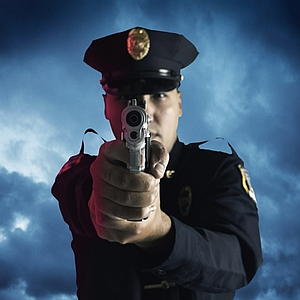 A Department Of Justice (DOJ) agent caught their employer a ridiculous case of the P.R. SNAFU’s following a renegade traffic stop. The traumatizing experience, during which the agent held a gun to the heads of three teens, compelled a 911 call. What followed amounts to the strangest of tales involving silent cops and consequences, all cocooned within an administrative labyrinth.

Madison Wisconsin is known for a lot of things, but grossly violent police aren’t necessarily one of them. One individual broke that trend recently, after using an unmarked black Dodge Durango to pull over three teens, the Milwaukee Journal Sentinel reports. The driver recalled the pounding on his window, frightening his two 16 year old passengers, hands raised submissively. Brilliant fluctuations of red and blue flashed from the car, both augmenting the fear factor and confirming that this was a real cop.

The window was lowered and an arm reached through to snatch the keys out of the ignition, the other cradling a gun. The trio’s assailant then ordered them out and throws them into the grass, keeping their keys. Holding the gun to their heads, the man accuses them of running a red light, things get hazy thereafter. They promptly called 911 after he’d gone, sending Madison PD on the hunt for a cop imposture. According to Milwaukee Journal Sentinel, Madison Police Chief Scott Gregory was unable to locate any nearby officers driving a matching vehicle.

Not long into the investigation, a DOJ agent came forward and admitted to having conducted the violent stop. Although the agent’s identity is unknown, his role as a Department Of Criminal Investigations officer is–funky right? In response to these sensational revelations, Department Of Justice spokeswoman Anne Schwartz said the agent has been placed on administrative leave.

Madison’s chief appears a tad tight lipped as well, given an email response Gregory sent Waukesha Cop Block’s (and a CopBlock Network Contributor) Tim Freeman. “The case was investigated by one of my detectives who did not know the DCI agent”, it read, “and the agent’s name was kept on a need to know basis internally until a media release was issued to the public as well.” Exactly why the agent was in Madison, and whether he’d been involved with Madison PD at all, is similarly unknown.

It’s been nearly a month since all this began, no name has been released to date. “This was done to keep the case as clean as possible”, wrote Chief Scott Gregory. “I am confident the agent’s identity will be released eventually; but it must be released in an ethical and legal way. Since our agency did not recommend any charges releasing his name would be inappropriate.” “We would do the same for you if we investigated you for a crime and cleared you, we wouldn’t release your name.”

The chief went on to preemptively deflect any possible future allegations that “the town of Madison is shielding or protecting the DCI agent.” Chief Scott Gregory assured, “that is far from the truth. In fact, I took the extra step to request the District Attorney’s office to review the case and our work. This is not normal, but due to the fact we investigated a DCI agent I felt it appropriate to take this this step to avoid the appearance that we are shielding the agent.” “Issuing any ordinance citations would cause issues if the DA decides to issue charges in the case”, he continued. Although Milwaukee Journal Sentinel reported the chief, “basically confirmed the teens story”, Gregory’s email read, “the two stories were similar but not the same.” Since the agent’s name remains withheld, it’s difficult if not impossible for journalists to report on and compare the two stories–the teens and the agents.

Chief Gregory later denied an open records request for the agent’s name, filed by Tim. Gregory cited the possibility of contaminating an ongoing investigation which “will be concluded within the next 30 days”, he wrote. Gregory, in his email response, made much reference to investigation reports, such as evidence gathered and interviews conducted. Freeman sent subsequent messages pointing out that he’d not requested whole records, only the agent’s name.

DOJ’s spokeswoman also moved to defend the agent’s actions in a separate statement to press. “While it is uncommon for DCI agents to conduct traffic stops”, says Schwartz, “it is their duty as law enforcement officers to act if they believe the public is in danger.” Given the agent snatched keys out of a car at gunpoint and forced civilians into the grass, thus provoking a lookout for a fake cop, he’d arguably endangered the public. According to Channel 3000, it is as of yet unclear if the agent was off duty or if agency policies were violated. If they weren’t, then DOJ should probably reevaluate its own operational mandates.

Bigger than the agent’s actual crimes are the implications of an investigator of police wrongdoing having committed them. This agent’s actions, coupled with the reluctant statements by law enforcement officials, only further dismisses DOJ’s city by city probes. It’s various nationwide investigations, although promising in a perfect world, amount to little if they refuse to investigate their own people. What we need is real reform, responsible investigations, and real conclusions, not propagandic crucifixion.

Given the numerous cases of police chief authority being overruled by federal entities, not even Chief Scott Gregory’s vagueness can be condemned. The Department Of Justice would do well to not only be transparent in this investigation, but also to clean up its own backyard before probing other agencies.