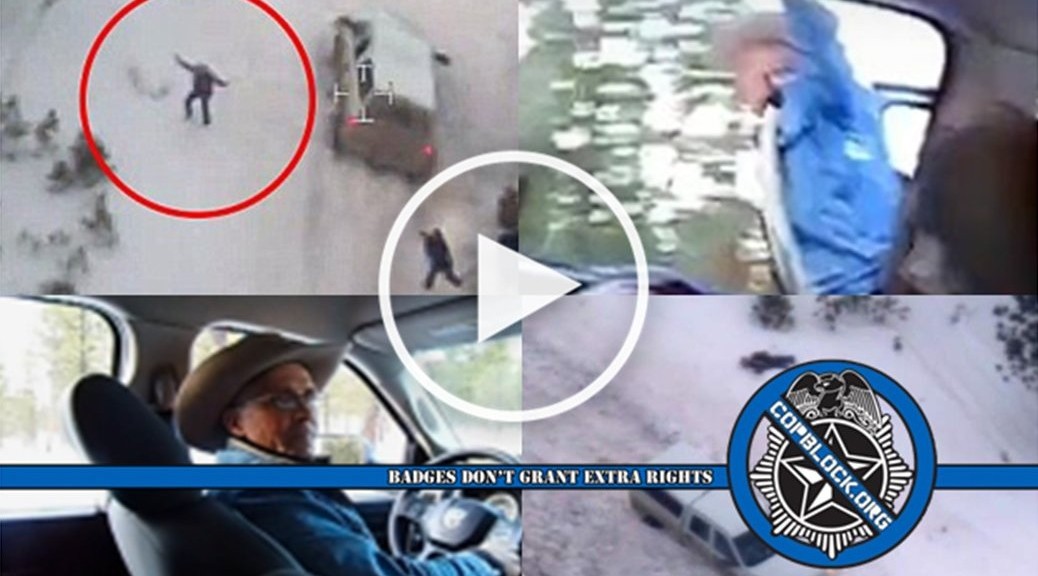 For the full back story that details the federal corruption and other issues surrounding why a group of armed men and women chose to take a stand against their government near Burns, Oregon, you can click HERE.

You can also gleam some of the dirty tricks that the FBI employed during the protest in order to turn the local population against the occupiers HERE, and learn why the brave participants should be venerated and not condemned HERE.

LaVoy, 54, quickly became the voice of the protestors during the occupation, giving mainstream media interviews and statements live from the refuge. According to an autopsy released on Tuesday, he was hit in the back by three rounds fired by two Oregon State Troopers, one piercing his heart.

On the day of the shooting, Lavoy, Ammon Bundy and several other occupiers with the Citizens for Constitutional Freedom were traveling to the city of John Day for a community meeting set up by local residents.

They were pulled over on U.S. Highway 395 by the Oregon State Police and the FBI. Officials said at the time that in an attempt to minimize violence, they had been waiting for an opportunity to arrest the group’s leadership away from the refuge.

Officials said Tuesday that prosecutors deemed the shooting “justified and necessary,” and claimed that LaVoy kept moving his hands towards his pocket which contained a loaded 9mm handgun.

The Citizens for Constitutional Freedom have steadily maintained that Lavoy was unarmed during his death and have called the shooting a “cold-blooded assassination,” and the FBI “liars.” They said that, “LaVoy’s guns were left at the compound” evidenced by the fact that his personal pistol can be seen in videos from the refuge after he was killed.

In new footage released on Tuesday, which syncs up cellphone video recorded from inside the vehicle during the shooting with aerial FBI footage that had already released, Lavoy is heard shouting, “just shoot me,” to the cops before he is killed.

This gives credence to claims made by one of the passengers that he “got out to try to keep the attention focused on him so that they would not shoot at the women in the vehicle.”

The footage shows Lavoy speaking with officers who identify themselves as Oregon State Troopers before refusing to exit the car and telling them to shoot him or follow him to Day County to see the sheriff.

LaVoy then takes off and makes his way toward a roadblock, where his vehicle is met with incoming gun fire before it veers left into a snow bank. That is when Lavoy exits and is gunned down. Officers can then be seen flipping off his lifeless body after they shoot him.

Officials said Tuesday that five FBI agents involved in the shooting have now came under criminal investigation by the U.S. Justice Department. The agents, who have not been identified, are part of an elite national unit deployed in situations like the one in Oregon.

One agent is reportedly suspected of lying about firing twice at LaVoy and the other four may have covered up for him afterward. Those bullets didn’t hit LaVoy, according to officials, but Inspector General Michael Horowitz is now leading an “independent” probe.

No details were given as to why the agent that fired the shots didn’t report them, and officials only offered that the other four were being investigated for conduct after the shooting. That may include flipping off LaVoy’s dead body.

Special agent in charge of the FBI in Portland, Greg Bretzing, said that “the question of who fired these shots has not been resolved,” and that the agency is cooperating with the inspector general’s investigation.

On Feb. 11, the final Oregon occupiers surrendered after the 41-day protest, but not before the feds took vengeance on 69-year-old Cliven Bundy – the patriarch of the Bundy family who lead the historic stand-down of federal usurpers at his Nevada ranch in 2014.

The elderly man was arriving in Oregon at the Portland airport, where he was surrounded by FBI and SWAT and taken into custody on the same “conspiracy to interfere with a federal officer” charge that his sons Ammon and Ryan, and the rest of those arrested during the refuge occupation were jailed on.

Preceding the release of the new video and the Justice Department investigation revelations, the FBI confirmed last week that they arrested several others involved in the 2014 standoff, including two other Bundy family members.

The feds were not willing to let the slight go. They were embarrassed and had been made to look weak and foolish in the eyes of the American people after they folded to the overwhelming response from defenders of liberty and ranchers’ rights. Unfortunately, the Oregon occupation did not have the same outcome.

We should not forget that Lavoy Finicum is a great American hero – murdered by his own government after they escalated an otherwise peaceful situation to death for daring to stand against federal tyranny.

People might say that police were just doing their job, that they were just following their training. Well, I say the officers and agents in this situation are traitorous filth that must be seen as nothing less than enemy combatants to the cause of freedom.

Even if Lavoy had been reaching for a gun, it would be completely justifiable in my view. Any officer or FBI agent that gave a shit about the oath they took to uphold Constitutional rights in this country would have been standing, fighting, and dying right alongside that brave man. Instead, they murdered him for a paycheck and flipped off his dead body.