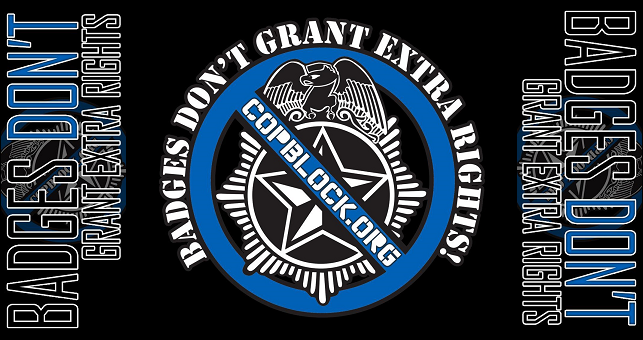 The foundational message of “CopBlock” is that ‘Badges Don’t Grant Extra Rights’. Within that spectrum there are activists working with different methods towards different goals, the greatest schism among us being Accountability-vs-Abolition. And yet it is felt that both groups can coexist harmoniously under that one message. And while I do not disagree entirely with that premise, I find that the statement itself is open to some interpretation.

Human languages are incredibly complex. Single words can have multiple meanings, and so whenever you start combining words into a larger message, it is possible that different people will transcribe entirely different concepts from them. Most people will take from a statement like that the most explicit message available, ignoring contextual relationships and implicit assumptions buried in the wording. When I consider the possible interpretations of ‘Badges Don’t Grant Extra Rights’ (BDGER), a few troubling ones come to mind.

First and foremost, there is a suggestion here that badges are acceptable, but that the granting of extra rights to those who wear them is problematic. This interpretation, which is what I think most people who read that statement take from, at least subconsciously, implies policing itself is an acceptable activity. This makes it seem incompatible with the ‘abolish police’ message I spread, if not by intention, than often in practice. And while this inconsistency is merely a side effect of subjective individual experience, it is often taken as a sign of hypocrisy or deceit.

The second problematic interpretation is that the statement does not call the granting of rights itself into questions, as though rights are a sacred idea that we must protect from corruption. Yet again, I do not share this view of rights. As I have explained before, rights are the products manufactured from our stolen freedoms and liberties, repackaged and sold back to us with less value and at a higher cost. The concept of rights implies that something has been granted, by either deities or societies, and I do not owe either of those entities a damn thing and prefer them not condescend to me by outlining the privileges they so gracefully grant me for my obedience to them. So again, does the statement that BDGER conflict with my overall message?

Not necessarily. I do believe that the people who put on those badges should definitely not be protected from the consequences of their criminal actions by the crime-fighting agency that assigned those badges. This does not mean I think police should exist. They do exist, and as such, a shiny badge and a crisp costume should not guarantee them special protections from their own machinations. Does that mean that I think that when they do break the laws they serve that they should be held accountable? No, not if by accountable you mean to be tried in the crooked system they work for, which I do not believe is fit for anyone.

Criminals often face natural consequences for their behavior, usually in the form of retaliation from their victims and their victims loved ones. Police interrupt this natural deterrent by forcing a monopoly on justice (which more often than not, fails spectacularly) and punishing those who fend for themselves. I think that criminals with or without badges should have to face natural consequences. I do not want accountability, I simply want people to understand that they shall reap what they sow, and so sow accordingly. This does not require anything but to simply let nature take its course. Nobody has the freedom or liberty to deny nature, and so police should not stack society in such a way that they are no longer subject to its laws.

When I say that I believe that BDGER, what I mean specifically is that:

Institutions should not exist
which protect some
from the laws of nature
at the expense of others.

I cannot speak for everyone else. It is likely that some of my colleagues are attached to one of the interpretations of BDGER that I reject. I cannot help that. I cannot help if a large portion of our readers also accept the implications of those interpretations which I personally find problematic. What I can do is set the record straight on my own beliefs and perceptions regarding that statement. Fuck your badges and fuck your rights…