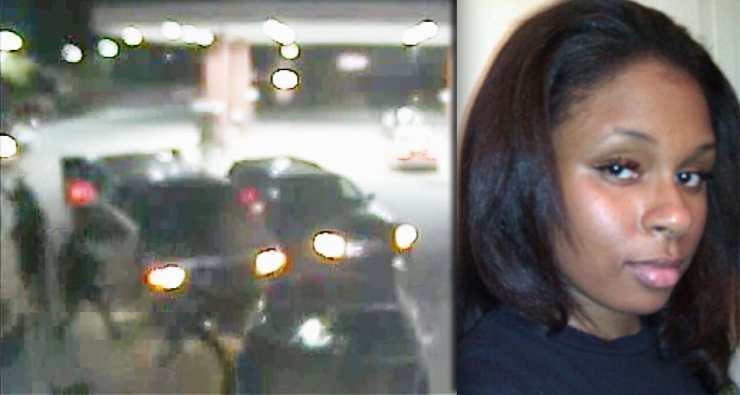 UPDATE: I received notification through a comment that India Kager and Angelo Perry were not in a relationship, and also of the purpose for their visit to Virginia Beach with their infant son.

India and Angelo were not in a relationship. Angelo is married. Angelo and India had a one night stand and the encounter produced a child. Angelo did not have anything to do with India during her entire pregnancy and for months after she gave birth. A few days before being murdered, Angelo came to College Park, MD to meet his son for the first time. On 9/5/2015, he asked India to drive him to Virginia Beach. He wanted his family and friends to me he infant son [sic]. The reunion was cut short when VBPD SWAT murdered India and Angelo.

After 6 months of pressure and an emotional plea from a grieving mother that became a viral video, the Virginia Beach Police Department has finally released the video of their lethal assault on India Kager. The surveillance footage comes from the 7-Eleven where Kager and her boyfriend, Angelo Perry, were shot and killed. The blurry video was released to the public the same day as the report from the prosecutor’s office declaring no charges would be brought against the SWAT team members involved, officers  S. Ferreira, K. Ziemer, J. Thorson, and D. Roys, because the shooting was deemed justified.

Kager’s boyfriend was a homicide suspect who, according to a confidential informant, was going to be in Virginia Beach to carry out a hit on an unidentified person. Despite “watching the location of Perry’s phone as it moved south from Maryland toward Virginia Beach (with what? Stingrays?),” and having “surveillance units deployed at different locations throughout the city in an attempt to spot Perry,” it was up to the confidential informant to tip off the cops that Perry was actually in town. The report also states “it was confirmed that Perry was armed,” but not how they knew this prior to the shooting.

After being followed by cops in unmarked vehicles for some time, Kager pulls into a parking spot at a 7-Eleven. Both police vehicles rear-end her car, and cops in the second vehicle immediately throw flashbangs at the passenger side before jumping out and running right up to the car and firing into it. The Virginia Beach Police Department and Commonwealth’s Attorney Colin Stolle contend that Perry did not respond to commands to show his hands, and fired at the officers before they fired into the car.

The out of focus video doesn’t show us who fired first, but it’s still clear that police escalated the situation to violence from the beginning, and didn’t take any action to protect India Kager’s life during the arrest.  Based on the erratic driving Kager was reported to be doing on September 5, and the fact that she parked the car when police believed Perry already knew police were following him, why did they not treat her as a potential hostage who needed to be rescued? Their actions during the incident, and findings in the report state Kager was not suspected of being a threat or involved in criminal activity at any time.

When a flashbang is detonated, it produces an extremely bright flash of light which temporarily overstimulates the retina. As a result, people cannot see for around five to 10 seconds; since most people prefer to remain stationary when they are visually disoriented, the flash can bring the people involved in a situation to a temporary halt which can allow members of law enforcement to quickly move in and take control. The deafening bang also contributes to feelings of disorientation; depending on one’s proximity to the device, it can cause a lingering ringing feeling in the ears.

So police intentionally blinded and disoriented the occupants of the car, then faulted them for not following commands screamed at them in the resulting confusion, while also not allowing them any time to respond to these commands.

Police knew in advance that Perry was armed and there was a potential third person in the backseat.

Even if there were no criminal wrongdoing in this case, the behavior of the cops in this incident was egregious, reckless and surely not in line with established procedure. Rather than maintaining a safe distance from an armed and dangerous subject, they idiotically rush right up to the door where Perry is sitting (they start to exit the vehicle before it even stops), don’t fall back once he starts shooting at them, and are in fact so intent on killing him, they don’t bother checking for the third person suspected to be in the car, who would have been free to fire upon them at point-blank range. If they did check the backseat, then they were fully aware that they were shooting into a car with an infant inside of it.

The claim that Angelo Perry put India Kager in the line of fire.

The report states, “it was Perry that turned his body with his back up against Ms. Kager and her seat, placing her directly in the officer’s line of fire.”

So according to this precious bit of cop logic™, an individual sitting next to a person cops are shooting at is not actually in the line of fire. Kager was not in the line of fire by virtue of being directly behind (from the cops’ vantage point) the person cops were firing at, but only because Perry had turned in his seat to face the cops.

Even if one bought that specious line of reasoning, there is also the abysmally low accuracy rates cops demonstrate when shooting at people. From PoliceOne [emphasis mine]:

Aveni also discovered a correlation between multiple-officer shootings and number of rounds fired.

With LAC shootings involving only one officer, an average of 3.59 police rounds were fired. When 2 officers got involved, the average jumped to 4.98 rounds and with 3 officers or more to 6.48. “The number of rounds fired per officer increases in multiple-officer shootings by as much as 45 percent over single-officer shootings,” Aveni says.

According to the Commonwealth’s Attorney’s report, Kager was shot 7-8 times. A news report states Perry was shot 15-20 times out of the 30 rounds that were intentionally fired at him. The autopsy could not determine conclusively whether any of the bullets that killed Kager had first hit Perry and passed through his body. The Commonwealth’s Attorney also stated that he did not think the number of bullets was high because there were 4 cops shooting, even though this represents 7.5 shots fired per officer, more than double the average number fired in single-officer incidents.

I won’t dispute that Angelo Perry sounds like he was bad business. If he had been the only one killed, I wouldn’t be writing this article. But the fact is, India Kager was killed that day and their infant son was also in danger of being killed.

India Kager owned the car she died in. Surely the VBPD officers following it had run the plates to see who it was registered to, and surely checked whether Kager had any criminal record (she didn’t). They were sufficiently convinced that she did not pose a threat to their safety that they didn’t even bother to have any cops cover the driver’s side of the car. Oh, you say that would have put cops in the line of fire from other cops? Well the official report tells us that would have only been the case if Angelo Perry had been sitting with his back pressed against them.

We also already know that it is possible to take dangerous criminals into custody without killing them in every instance. Just recently in Virginia we saw a man who had just murdered his wife, a rookie police officer, and shot two other cops as well, arrested without being killed or even shot. There are also the recent bloodless arrests of mass murderers Robert Dear (a cop killer to boot) and Dylan Roof, as examples of dangerous criminals being arrested without incident. Does this mean armed and dangerous criminals can always be taken into custody without the use of force? No, only that it doesn’t inevitably involve use of force.

The Virginia Beach Police Department alleges that Perry used the two guns found in the car in a series of crimes between June and August, some of which involved an accomplice who has still not been arrested or identified. This brings up several other questions:

Lastly, although the official report states, “There is absolutely no evidence that Ms. Kager was a part of any of the illegal activity that Perry was committing,” it doesn’t prevent cop apologists from stating she was responsible for her own death. Some even claim she knew Perry was (allegedly) on a crime mission. “No evidence that Ms. Kager was part of any illegal activity” means that police did not believe she was serving as the getaway driver in a murder plot. It also means that either they don’t really think that Perry was out to murder someone that day, or that Kager was totally unaware of it if he was.  Perry may have killed and assaulted multiple people that summer, but surely deceiving his girlfriend was a line he would never have crossed.

Meanwhile, the authorities refer to Kager’s death as an accident and a tragedy. Saying otherwise doesn’t jibe with the sanctity of life philosophy that police departments now say they are embracing. Also, they know it’s obvious that only a shit-eating jackal would say that India Kager deserved to die simply for being in the presence of Angelo Perry, or that the loss of her life was a cheap price to pay for getting a bad guy off the street. 9.3k
SHARES
FacebookTwitterGoogleRedditTumblr
DiggLinkedinStumbleuponMailPrint
You Can Support Cop Block by shoppping on Amazon using the banner below:
BANNERS ARE CLICKABLE