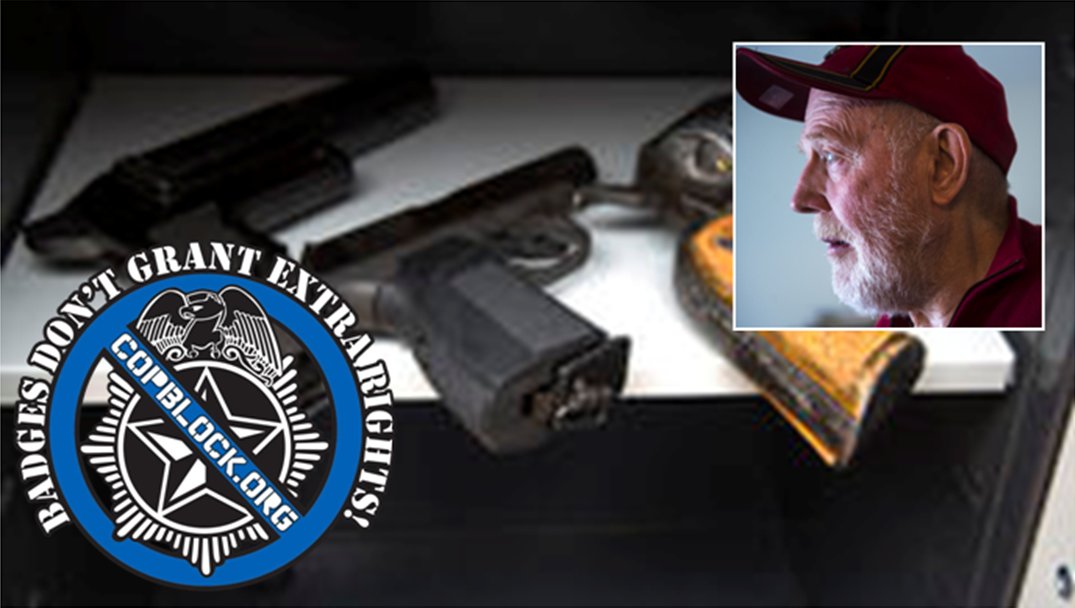 Although Ralph Gilbertsen has never been arrested for domestic abuse, is not a felon, and has never been deemed a danger to himself or others, cops in Richfield, Minnesota confiscated his firearms.

The 74-year-old former Marine and security worker has a state-issued carry permit and is now suing in attempt to get police to return the three legally acquired handguns they removed from his home last May.

Gilbertsen believes in Bigfoot, UFOs and receives treatment for a “mild” mental health disorder. Police were alerted to him after people at his apartment complex reported that he frequently brings up government conspiracies and expresses concerns that the CIA is spying on him.

He wrote a series of letters alleging that he was constantly being harassed by CIA agents that had infiltrated his apartment building posing and tenants and staff and said the conspiracy even reached into the Richfield Police Department.

“There are literally hundreds of CIA spies in Richfield alone that harass me,” Gilbertsen said in one letter. “There are thousands of these people in the south-suburban area. I am certain I will be murdered some day.”

Gilbertsen also keeps a list containing over 75 license plate numbers from vehicles he believes have followed him. Even though he didn’t threaten violence in any of his letters, officers still came to his home and demanded he turn over his guns.

It was the Hennepin Community Outreach for Psychiatric Emergencies (COPE) that called police about Gilbertsen after his apartment managers voiced concern about the letters.

COPE, which has been called a “SWAT team for mental illness,” is a 30 person agency that handles around 13,000 cases in the area. They asked the cops to escort them to Gilbertsen’s home, resulting in the subsequent confiscation.

His psychologist has asserted to the judge in his case that Gilbertsen is compliant with his medications and poses no danger to himself or others, but Richfield police officials say it is now their role to determine the status of individuals’ mental states.

“The street cops nowadays have to be a psychologist,” Lt. Mike Flaherty said. “People don’t wear nameplates saying ‘paranoid schizophrenic.’ So the police have to go in there and make judgment calls.”

In all, the cops seized a .40-caliber Smith & Wesson pistol, a .357 Smith & Wesson magnum, and a RG .22 revolver from Gilbertsen with Flaherty saying the questionable gun-grab was completely appropriate.

“I’m confident our officers seized the weapons with the best intention,” Flaherty said. “It was a mental health issue, and I think the cops responded appropriately.”

It is not a crime to be a conspiracy theorist but Gilbertsen’s attorney, Paul Baertschi, says that his client is having his Second Amendment rights infringed upon simply because of his beliefs.

“He’s what some people would say is a conspiracy theorist. It is an unusual situation,” Baertschi said. “But really, the police acted unilaterally in deciding that a person who has these beliefs can’t be trusted with a gun. And so they just took them, without a warrant.”

Gilbertsen, who lives on a meager monthly Social Security payment of just $900, is optimistic that justice will be served in his case and that the firearms will be returned. He describes himself as patriot and a Christian who would not hurt anyone.