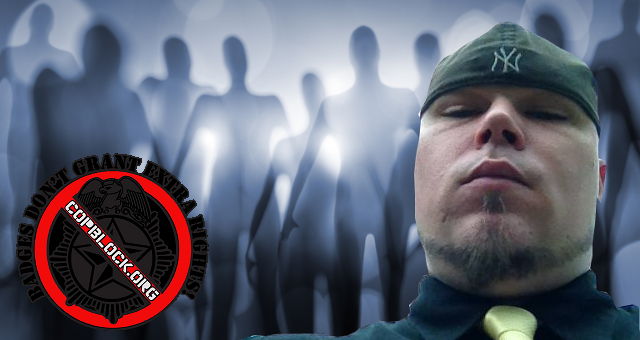 Justin Bainter is in love with me. At least this is what I must assume considering how much time he spends stalking me and talking at and about me. His encyclopedic knowledge of my writings at all of my websites likely makes him my most avid reader. The litany of pet names he has for me reminds me of bumbling adolescent crushes playing out in cruel teases back in high school. He is always so desperate to get my attention that he barks at my heels like a yappy little dog in comments on our CopBlock Facebook page. Here is his most recent love note to me:

Lmao, so you want the country to change. Ok, well the first thing to go is your precious rights. Second is the weak, like Josh Hotchkin, will be forced into servitude by the strong.

You guys think you have it all figured out. You think humanity can survive anarchy? You think people are all good and will follow the ideals behind a volunteerist society? Remember all those people that used to be cops? The very ones you claim are all corrupt? If they are as corrupt as you say they are, then wouldn’t it stand to reason that they would still band together and do whatever they want without impunity or fear of prosecution? You think your way will enhance the world, but I’m sorry, it will destroy it and you.

Why don’t we break this down and respond to one thought/accusation at a time.

“Lmao, so you want the country to change.”

I don’t want countries. I don’t want national identities and borders or the oppressive institutions which uphold them. So, no, I don’t want the country to change. I want humanity to change. Through the evolution of individuals and ideas, and a collective value system much more effective, stable and long lasting than the tyranny of violence and force.

“Ok, well the first thing to go is your precious rights.”

Well, maybe you have not read everything I wrote, Justin. If you had been paying closer attention you might have noticed that I find the concept of rights to be inherently flawed. You can brush up on my commentary about rights HERE, HERE and HERE. But I will summarize:

Rights do not exist. They are illusory consolation prizes granted by those who have usurped the freedoms and liberties of individuals. Once they have stolen from you the freedoms and liberties that were your natural birthright, they repackage them as privileges called ‘rights’ that are of lower value and higher cost to the individual. Rights are the artificial flavor equivalent of human autonomy.

Second is the weak, like Josh Hotchkin, will be forced into servitude by the strong.

If I am so weak, why am I unafraid to live in a world without badged thugs supposedly protecting me? If I am weak, then why do I stand against a system that has me outnumbered, outarmed and able to end my life or make it pure hell for what I do; while you can’t seem to lick their boot fast or furiously enough?

Besides the fact that I have my doubts that this mysterious crystal ball which tells you the future is in any way accurate, or not just a complete fabrication of your imagination, I am not so certain that there are any potential boogeymen just waiting for police and the state to go to sleep so that can get me. Ooga booga! At any rate, that is exactly what is happening already. The state uses majority consensus and force (might makes right) to restrict my activities while forcing me to share the fruits of my labor with them. We already got servitude to the strong, buddy. That is the problem.

You guys think you have it all figured out.

There are plenty of things I do not have figured out. Why you are so obsessed with me is one of them. How to avoid extinction by Idiocracy in the climate of rabid anti- intellectualism, groupthink and mindless obedience that you subscribe and contribute to is another. But I am a smart guy, so maybe I will figure those things out. And there are a lot of other smart people, although I am sure you probably spend very little time talking with such folks, that are all working on innovative ideas for the future that allow human civilization to operate from voluntary cooperation rather than oppressive monopolies.

What I do have figured out is that aggression is immoral, and that the ultimate function of police and the state is to enforce their own agendas against those of individuals through aggression. The state is not held together by morality and righteousness, it is held together by the threat of violence, imprisonment and death. It employs coercion and compulsion to force people to follow its dictates simply because they were born in the temporal and geographical location of its existence. Yeah, I do definitely know that.

You think humanity can survive anarchy?

Well, that is pretty obvious, now isn’t it? Of course I do. What I am afraid that it cannot survive are arms races, world wars, psychopathic despots and the general breakdown of the human spirit caused by generations of oppression and dehumanization. Even the most prolific serial killers in history have had trouble breaking the 100 kills barrier. Police killed 12 times that many last year alone, while the warfare state has killed millions in the last few centuries of industrial conflict. While private deviants working on their own are more likely to kill less than a handful in their lifetime, organized violence has shown its ability to nuke entire cities. I am not a betting man, but given the odds here, I would go all in betting that we stand a better chance of surviving without the state.

You think people are all good and will follow the ideals behind a volunteerist society?

There are no ideas behind a voluntaryist society, that is the great thing about it. Everyone has a choice to voluntarily interact and cooperate with any other individual or organization, or not. Nobody is forced to follow anything or anyone. Whatever ideas or beliefs individuals possess in a voluntaryist society are of no concern to anyone who is not considering interacting or cooperating with them.

I think that most people are good. I think that the living in an oppressive society with too much structure creates a lot of psychosis, melancholy and aggressive impulses. It also artificially channels wealth into the ruling elite, creating the kind of poverty that inevitably leads to aggression. Yet even in the post-archy world there would be an anomalist faction of flawed individuals with desires and impulses dangerous to everyone else. In a world where there were no consequences for dealing with the trespassers of human values, there would be a far greater deterrent, and an expectation of negative response by the trespassed. Those are natural consequences, and they seem to work for every other species on the planet without them cannibalizing themselves to extinction. A society based on innovation instead of oppression would figure out a way to deal with those that were just born to be bad, instead of electing them to office or giving them a badge.

Remember all those people that used to be cops? The very ones you claim are all corrupt? If they are as corrupt as you say they are, then wouldn’t it stand to reason that they would still band together and do whatever they want without impunity or fear of prosecution?

Yes, that does stand to reason. Even sociopaths understand strength in numbers. The thing is, they are still far outnumbered. And besides that, they have no longer been given the keys to the kingdom from which to ply their vicious trades. They would not be standing on the very backs of those they oppress. Good people would not be sponsoring and thus strengthening their violent organization and activities. It would not be sanctified by the religious glory of the state. People would recognize these thugs, and not be conditioned from birth to view them as heroes with trust absolute. We would stand a far greater chance against these types, even if they stick together, without the state to strengthen and protect them. And they too would have to fear the consequences of their actions by people whose peers are unlikely to think twice about them being dealt with in whatever manner.

You think your way will enhance the world, but I’m sorry, it will destroy it and you.

What it all boils down to, Justin, is that you have an irrational fear of humanity. Your psychic predictions and insistence that all that is preventing evil shadows from attacking us at every corner is irrational. On the scale of ‘mental health issue’ -to- ‘reason’ your hyperbole-drenched fear is somewhere in the ‘mild paranoid-schizophrenic’ range. You don’t need police or the state to keep you safe, Justin. Your own mind is your biggest threat to you. Your delusional fears and dependency on and enabling of your greatest abusers are a toxic combination that put you in grave danger. So I beg of you, please, get some help. Many people have recovered from far worse mental states with the assistance of a good therapist, and I have every hope that you can make a full recovery. And when you are free of delusion and attachment and all of the ugliness they bring, you can join us in trying to save others from their own crippling fears and appetites for oppression.