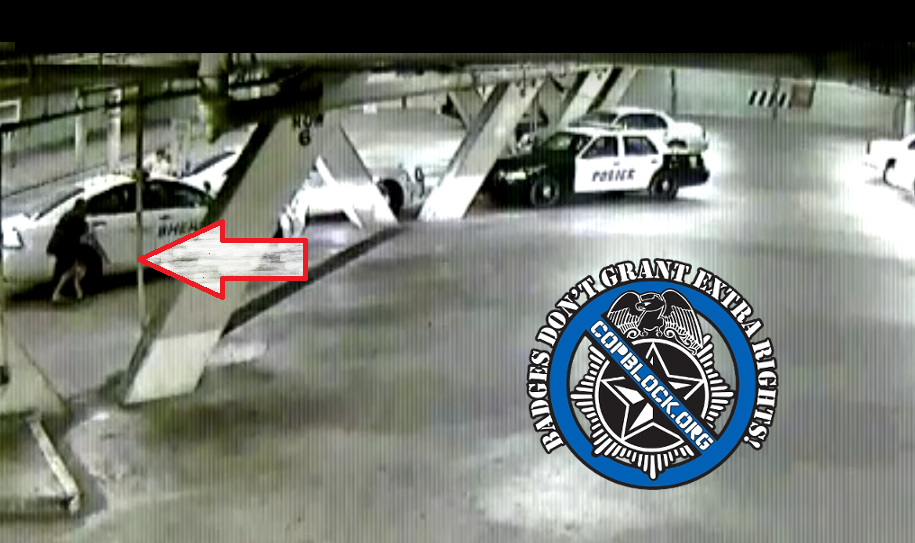 First, he got really high on meth and pulled a gun on some kids before assembling an arsenal of drugs, guns, and “bomb making materials” and heading to a local park, where he got arrested.

Then he staged a Houdini-esque escape from a patrol car in the garage of the jail right under the nose of the two cops who were transporting him there. All of which was captured on the garage’s surveillance video, which is included below. (Sadly, it was submitted too late for serious Oscar consideration. But there’s always next year for now-former Deputy Tucker.)

Tucker was first arrested Oct. 24. He approached a group of children at a birthday party off Belle Terrace and then pulled out a gun. A witness said Tucker told the children he was being chased and that he was looking for a woman on a bicycle.

The girls denied knowing anything about a woman on a bicycle.

“He pointed the gun straight at them, at their chest, each one individually, and told them, ‘You’re lying to me,'” a resident described.

Tucker was found that night with guns and methamphetamine, and he was suspected of being under the influence.

“That gun was only loaded with practice rounds so it couldn’t fire,” said (defense attorney, Kyle) Humphrey. “The bullets were plastic.”

Tucker bailed out after that arrest but was arrested again Oct. 27. He was also found that night with drugs and weapons.

Then Tucker escaped from the sheriff’s office custody. Surveillance video from the jail’s garage shows Tucker getting out of the back of a patrol car and simply walking off. Deputies were nearby but apparently didn’t notice Tucker escaping.

He was caught a couple days after that and arrested for a third time in Oildale.

Humphrey argued that Tucker “didn’t escape from a jail facility” even though he was in the jail’s parking garage in a patrol car. He was eventually able to get the charge dropped as a part of the plea deal.

“He wasn’t booked, so it wasn’t technically an escape,” said Humphrey. “It would have been a resisting arrest.”

Humphrey admits that it sounds an awful lot like a technicality.

On March 3rd, Tucker agreed to accept a plea deal, which will result in seven of the nine felonies he had been facing being dropped. the two charges which he entered a “no-contest” plea to were “being high on methamphetamine while driving and while in possession of a gun.” He also agreed to plead no contest to a new charge of assault.

Between the dropped charges and the credit for time served Tucker is expected to be released next month, essentially being sentenced to six months in jail for doing meth and then driving around Bakersfield, threatening children with a gun, possibly trying to build a bomb, and escaping from custody. That’s probably the sort of deal your average citizen would expect to get had they done all that and not the typical Policeman’s Discount.

On the day of the plea deal, Humphrey said the fact that Tucker used to be a sheriff’s deputy certainly went a long way in getting him a lighter sentence.

“There is some truth to that. He got a lesser sentence than a person with a bad criminal record would get,” said Humphrey. “If you make a commitment to do good in the world, and you do good for a very long time — and then you screw up — you absolutely should get credit for that.”