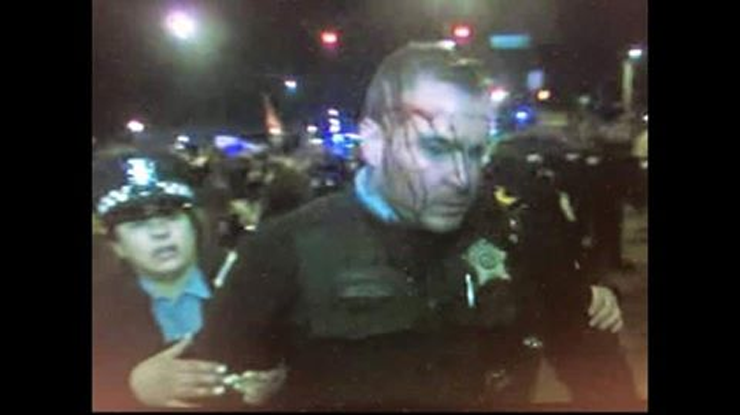 There has been a lot of coverage about Donald Trump cancelling his rally in Chicago over the weekend due to protest activity. Trump supporters and protesters clashed after the event was cancelled and several bottles were thrown (it’s not known by whom) that hit at least 1 police officer, who was photographed with blood running down his face. I don’t condone initiating violence against anyone, including cops. I’ve been consistent with this in everything I have written on this website and as a Facebook admin for Northern Virginia Cop Block and Virginia Cop Block. Violence (excepting defense of self and others) is morally wrong and advocating the use of it against law enforcement hurts our cause and helps police.

That said, I’m more interested in the response by the various cop and cop apologist Facebook pages to the Trump rally incident. Specifically this post from Stop the Cop Haters, which cries incredulously, “Is this how we do things now? If you don’t like someone’s free speech, riot and protest with your free speech until you get the speech cancelled. Hmmm. Anyone see the problem [sic]”

This is too rich coming from a cop apologist page that has shown time and time again that it does not value freedom of speech in the least. Take this post from January when they wrote approvingly of the proposed Arizona legislation (since withdrawn) that was referred to as an “Anti-Cop Block bill.” This bill aimed to criminalize the first amendment act of filming police using the evergreen and ever-growing guise of “officer safety.” In one short post, the author manages to express disdain for the alternative media, dehumanizes those who film police (the vast majority of whom are not affiliated with Cop Block, by the way), baselessly accuses them of calling for violence against police, and then feigns concern for the safety of the same group it just called “barely human.”

The fact is police and police apologists are openly hostile to free speech for anyone except themselves and those they view as allies. This is apparent every time they equate talking about police misconduct with killing police. To them, criticizing law enforcement is the same as murdering law enforcement officers, and they agitate for legislation that targets the first amendment rights of those who say things about cops that they don’t like.

In addition, law enforcement’s repression of first amendment activities through programs like COINTELPRO is well-documented. Many people act as though because COINTELPRO ended, the types of activities and procedures it is infamous for no longer take place. This is false. These methods have survived to this day and been adopted by law enforcement agencies at all levels of government.

These agencies greet protest groups with intimidation and force, monitor their communications and movements to disrupt planned events, disseminate false stories about anticipated violence from protesters, target reporters to prevent police actions from being shown in the media, infiltrate protest events and serve as agent provocateurs attempting to entrap and incite others to commit acts for which they can be arrested for, And of course, there are also the everyday cases of cops snatching cameras, deleting footage from seized cell phones, and arresting people for filming the police.

In addition to the above, police also encourage cop apologists to attack those who protest police brutality on their behalf. See the approving Facebook page posts here and here regarding counter protesters committing assault on a man who burned an American flag at an anti-police brutality in New York City last summer. Like it or not, flag burning has already been affirmed by the Supreme Court as protected first amendment activity. I previously wrote an article about this in which I categorized the common threads seen in the comments on the above posts:

Most of the police comments on the flag burning photos fell into one or more of the following categories:

We also see this mindset in action at recent Trump rallies where cops blatantly ignored assaults on protesters that happened right in front of them. This is not surprising given that Trump has gone out of his way to praise law enforcement, the group he apparently looks forward to having as his personal armed henchmen if elected president, a role police already seem eager to fill.

This is not the first time that police have disregarded the rights of Trump’s critics while ignoring the violence or threatened violence of his supporters. From the Daily Beast:

Conservative essayist Bethany S. Mandel, who has been awash in a deluge of social media abuse since she began denouncing Donald Trump, finally purchased a handgun over the weekend.

“It’s a .22 magnum revolver,” says Mandel, the mother of two young children, who applied for a firearms permit at her local suburban police department after absorbing a fusillade of vile, anti-Semitic tweets and Facebook messages in recent months…

“When I went to my local police department and applied for the gun permit, they said, ‘Maybe you should stop writing things that make people angry,’” Mandel recounts. “And I said, ‘OK, I’ll give that some consideration.’

Yeah, about that line of reasoning…

Bank: “We’ve been robbed?” Cops: “Have you considered not provoking them by having money?”

@Popehat they don’t use this same logic when it comes to their own behavior, however.

.@30point1 “Have you considered not shooting unarmed people and raping them with broomsticks?” “why, that’s anti-police hate speech!”