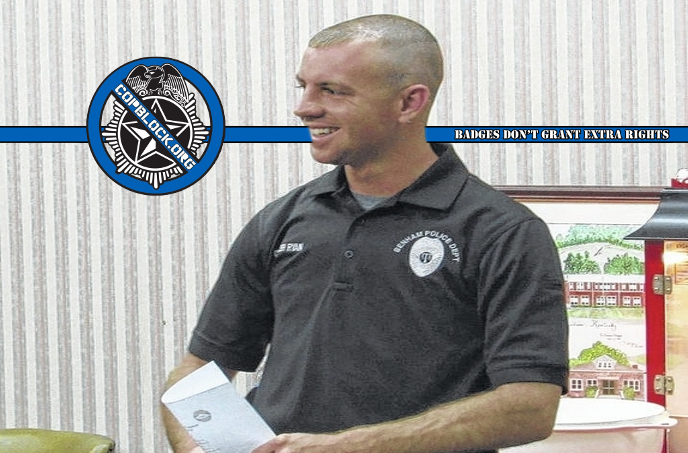 Jonathan Felosi used the submission tab here at CopBlock.org to share his story of Benham, Kentucky’s newly appointed Chief of police, Ryan Shepherd. According to the Harlan Daily Enterprise:

Shepherd said he feels honored to have been chosen as chief.

“I’m going to deeply miss Drew,” Shepherd said, referring to the former chief. “He was a very good teacher and an outstanding leader.”

Shepherd was sworn in as chief during the council’s February meeting.

“I’m proud to serve this community,” Shepherd said. “This is a beautiful town. The people are more like family, I’m really thankful and lucky to be able to serve a city with people as kind and nice as the folks here.”

While I’m sure that the people of Benham are probably nice folks that might not be the case for Shepherd. According to Felosi the newly appointed Chief assaulted him while handcuffed about two months before his promotion and that doesn’t seem like the actions of a ‘nice guy.’

On December 23rd, 2015 I was leaving the Post Office in Benham, KY and Shepherd jumped out of his car and started saying I was drunk. He wanted to me to do the eye test where they go back and forth with a pen or something. Problem is I have a natural bilateral nystagmus, aka dancing eye, and it’s impossible for me to do that test so I refused and he cuffed me behind my back and put me in the car.

I gave him my name, address, DOB and social security number. He said my social was not showing up in his computer so I gave him my driver’s license number and he confirmed he got that. For each time he asked me for my social and couldn’t find it, he charged me with identity theft. Three counts I believe. The chief Drew went to bat for his lies and told my mother that I gave him the exact ssns for other family members, like I would just have all their SSN’s on hand and try to say I’m three different people?

Then we’re on the way to jail, I said you are going to take me for a blood test and he started screaming at me. By now I’m arguing back with him. All of a sudden pulls over, goes up some back lane, puts gloves on – black with plastic knuckles – and then jumps in the back seat. I was knocked out after the first punch but he obviously continued hitting me many times after that.

I come to as we are passing the Huddle House and he asks, “you still want that blood test now?” I said, “no, let’s go to jail.” On the way there I told him I had some weed and he ignores me. I am seriously dazed, I can’t hold my head up or anything. So we get to the jail, he says give me the weed, I reached in my pocket and handed to him. For that I was charged with tampering with evidence and promoting contraband – which are felonies. Then I don’t remember much but waking up in the hole (I was there for 20 days) and having to pay $5 for 2 doses of ibuprofen. I was not allowed to have visits and couldn’t use the phone for a week. After that only 15 minutes per week.

I was also charged with first degree menacing, first degree disorderly conduct, resisting arrest, etc. The statement is ridiculous and the chief at the time lied to my mother about everything and claimed he was there. He was not. Besides getting nearly half beat to death I was charged with 4 felonies and 7

misdemeanors for what was just a PI and possession of marijuana at best, both citable offenses.

They just promoted this man to chief, the mayor is never at city hall and does not return emails or phone calls.

Could you imagine living in a small town and then having the man that beat you while in handcuffs promoted to top cop!?!? If the former Chief backed Shepherd’s actions of excessive force you can expect that he will as well. Felosi states that he’s been trying for months to get the video and/or audio recordings from his ride to jail but has been stonewalled by police. Go figure right?

If you’d like to give the Shepherd a call you can do so at (606) 894-0032. It seems they are behind the times on having a website or any social networks (that I was able to locate) so an old fashion call flood will have to do.

I’ll update this post WHEN we obtain the video or statement from Shepherd.