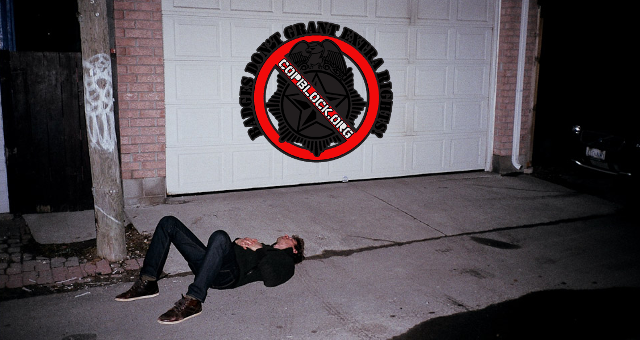 A man goes out for a night on the town. Over the course of the night he collects kisses, dancing blisters and a serious case of inebriation. All in all, a pretty good night. But his friends refused to let him drive the dozen blocks back to his home. Since alcohol and obstinate idiocy go hand in hand, he refuses a cab or a ride or even a partner for the walk home. “I can take of myself, you bunch of fuckin’ Nazi Nancy’s!” he says as he heads out into the night.

He makes it about a block and a half before he starts feeling what he describes in his head as ‘all wooshy’. He ducks into an alleyway and sits down to clear his head, “Only for a moment,” he tells himself. After about three moments he is passed out cold, dead to the world and oblivious to his predicament.

A short while later a couple of common thugs pass by and notice him. Specifically, they notice his shoes, but are not above emptying his wallet and grabbing his watch as well. Satisfied, they move along.

A bit later yet, some cops pass by. He is pulled from his alcohol-induced revelry by the sound of their voices making demands on him, and eventually trying to lift him to his feet. As he awakens from this daze, he is shocked and confused by the events now taking place. His arms swing and body flails as he tries to escape the clutches of hands attached to bodies he cannot fully see or comprehend in his state. The last thing he remembers is hearing the words ‘STOP RESISTING!’ before he awakens hungover and beaten up in a jail cell the next morning.

Over the course of the next several months he is forced to take time off for work for court. He is eventually found guilty. Now he has to pay fines, lawyer fees with substance abuse evaluations and then treatment, which also costs him money and time off work. This costs him thousands of dollars.

The net loss of his shoes, pocket money and the cheap watch the thugs took for some reason only set him back a few Benjamins.

Who was the drunkards biggest threat, criminals or cops?

Most thieves don’t hurt the people they steal from. It is a statistical anomaly for that to happen. It just isn’t worth it.

But the police will beat you up and steal from you on credit, slowly, over time. They also strike far more often than private criminals do. And when they do it, it is legal. Hell, some folks even call it heroic.

So ask yourself, if you were passed out in an alley, who would you prefer found you? The cops or the criminals?

The only difference is that private criminals will rob you and be done with you, but police are the grift that keeps on giving.