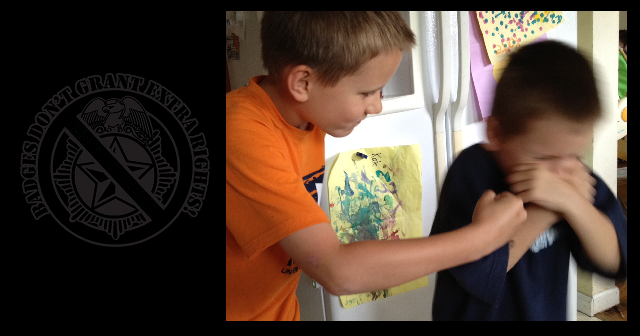 Springtime has sprung, and with the return of comfortable outdoor recreation, kids are back in the yards, streets and playgrounds doing what they do. And in this maelstrom of experimentation and interaction, old games are always being reborn with new social context. Such is the case of the classic game Two for Flinching in which you try to trick a friend into visible alarm from your sudden movements as a precursor for permissibly punching them.

I was unaware of this trend replay until I recently spent some time with the uncle of my brothers son. He told me that his nephew was playing a Two for Flinching style game in which a protagonist initiated the contest by pretending to hit his opponent, but intentionally falling short, and then if the person reacted physically or verbally the initiator yelled ‘I feared for my life!’ and punched the target twice in the upper arm.

It seems the narrative justifications of police have bled through media into childhood and morphed into a reboot of classic playground antics.

Rumors of another sadistic childhood revisitation have recently surfaced in a purported game called ‘cruiser bruiser’, a remake of the ‘slug bug’ game in which the first person to notice a cop car in the vicinity has permission to lay fist on the biceps of a buddy. After the requisite sadism, the initiator of violence claims that ‘if you weren’t doing anything wrong, they wouldn’t be here’, and high fives anyone nearby willing to reciprocate in return for avoiding their psychopathic wrath.