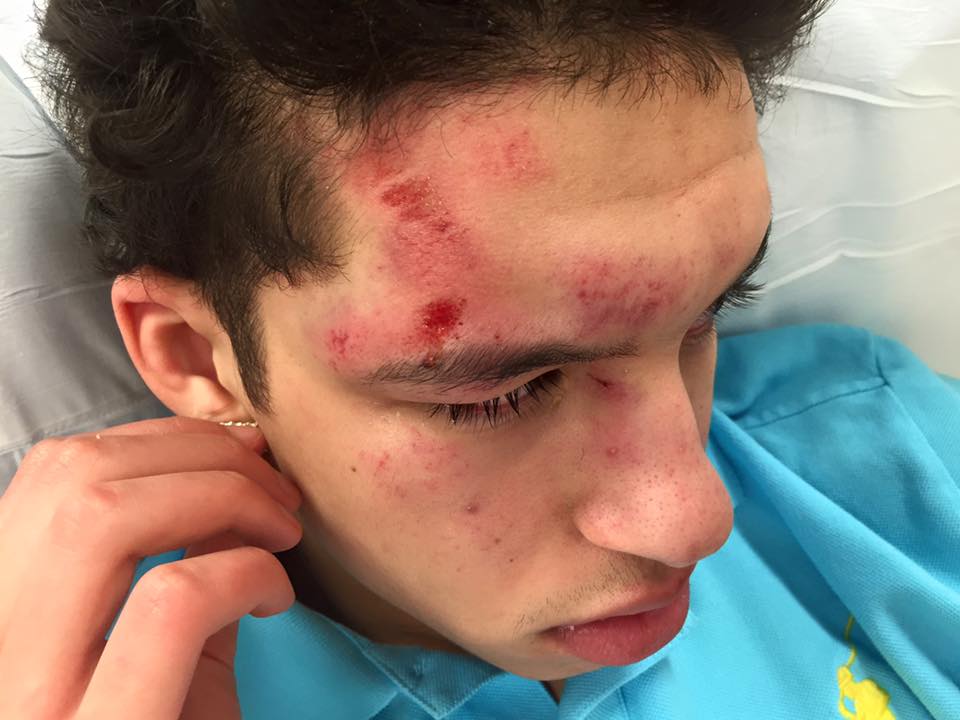 This afternoon a Facebook friend messaged me with a link to a Facebook post. This post, by Nicole Dioguardi-Beck, claimed that a Gates Police Employee (possibly the liaison to the school) tackled, handcuffed and then beat a 15 year old boy. According to Dioguardi-Beck: (structure edited for publication)

On Friday my best friends son – Joe Quinones, who is 15 years old was involved in a verbal argument with his principal Mary Vito over his cell phone being confiscated. There happened to be a Gates police officer – his name is Officer O’mara – in the building at the time of the incident with the principal.

Let me state that it was just a verbal argument over the cell phone it was not a threatening argument nor was it physical but the officer felt the need to get involved. At which point OFFICER O ‘MARA grabbed Joe Quinones and threw him on the ground, handcuffed him and then proceeded to turn him over and beat him with his fists in his face. Below you’ll find pictures of his face, wrists where he was handcuffed and choke marks around his neck. The brutality that this 15 year old boy endured is criminal and disgusting!!!!! He could not even defend himself because he was handcuffed at the time of the assault. He did not receive any medical treatment from the School in Gates or was an ambulance called for this child.

The principal & the police officer dropped the boy off to his mothers residence as if nothing of any significance happened stating “That Joe sustained the bruises from falling when he was being restrained & handcuffed.” The mother tried to reach out to the Gates Chief of police who refused to help her.

Sounds like once again the police department is siding with their own officers and not doing what is in the best interest of the child or the community. It is very clear that this child was beaten it’s disgusting!!!! Now I want you to imagine you send your child to school in the morning and you know in the back of your mind that he’s 15 years old some kids at that age are loudmouths you know they can be disrespectful but no amount of words could ever deserve a beating of this magnitude & severity. So please let’s get this out there Share it and share it again because this needs to STOP NOW….. I called the Gates police department and spoke with a Lieutenant who stated that O’Mara is an officer there, that the department is aware of the allegations and action requires an Internal Investigation or directive from the Chief.

What we really have here is another case of double standards. Just this morning I posted an update from South Florid CopWatch about an officer who’s name is not being released due to the pending investigation. Yet, in both that and this case if the perpetrator would have been a NON LEO you can bet your last dollar that you would be cuffed, stuffed and sitting in a jail cell awaiting to see a judge.

And in this case the victim, who was upset and only verbally disruptive, is a 15 year old CHILD. If any parent would have done the same to their 15 year old not only would the police have arrested them for child abuse but Child Protective Services probably would have taken all kids from the home.

That just isn’t the case when the offender is a cop. O’Mara will most likely sit on paid leave (maybe desk duty) for months while his buddies find a way to reduce the abuse of a defenseless child to something that doesn’t require them to cuff and stuff one of their own.

It’s an absolute joke and people should be outraged. Consider leaving a comment on the Gates Police Facebook page or calling them at (585) 247-2262.

TELL YOUR KIDS ABOUT CELL 411 AND YOU’LL ONLY BE ONE NOTIFICATION AWAY!