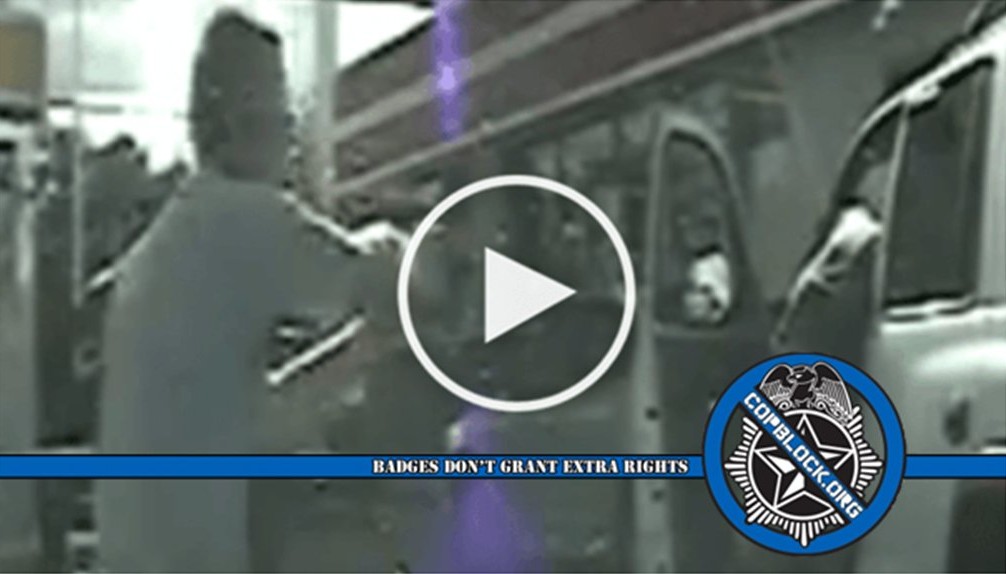 A South Carolina state highway patrolman recorded by his dash-cam shooting an unarmed man after he asked him to retrieve his license back in Sept. 2014, has now pleaded guilty in the case.

The footage shows 31-year-old Lance Corporal Sean Groubert pull into a Circle K gas station on Broad River Road in Columbia, behind Levar Jones, whom he said was not wearing his seat belt.

Jones, 35, was exiting his vehicle in order to enter the gas station when he was ordered by Groubert to produce his drivers license.

As Jones attempts to comply and re-enters his still open truck to retrieve his identification, Groubert immediately unholsters his weapon and fires four shots.

Groubert can be heard asking Jones if he was hit by a bullet and then radios for an ambulance.

“Bro, you dove head first back into your car,” he says. “You jumped back out. I’m telling you to get out of your car.”

Jones was not armed or behaving aggressively. He was struck once in the hip and taken to a hospital to recover. He still walks with a limp.

Groubert was fired and arrested following the incident and booked at Alvin S. Glenn Detention Center on $75,000 bond. He was charged with “assault and battery of a high and aggravated nature” – which carries a maximum sentence of 20 years in prison.

“While Mr. Groubert was within the law to stop Mr. Jones for a safety belt violation, the force administered in this case was unwarranted, inconsistent with how our troopers are trained,” SC state police director of public safety, Leroy Smith said at the time. “These violations demonstrate behavior that deviates from SCDPS standards and cannot be tolerated.”

An attorney for Groubert had argued that his client was justified in the shooting but on Monday, Groubert pleaded guilty to the felony charge. In court however, the former patrolman continued to suggest that he was in the right.

“The subject was highly aggressive and belligerent and ready to attack me from the second I initiated the traffic stop,” Groubert said. “Everything seemed to be happening in fast forward from the time I saw the driver begin running toward the vehicle. I was unsure if the shots fired were coming from my own pistol, or if he was actively shooting.”

Groubert’s attorney mentioned that his client takes medication and regularly visits a psychiatrist to deal with post-traumatic stress disorder stemming from a 2012 shooting in which he was fired on during a traffic stop.

He was awarded the Highway Patrol’s Medal of Valor for running down the suspect and many have been left to conclude that Groubert’s past experience crippled his ability to objectively ascertain what was occurring during the incident with Jones.

Groubert will be sentenced in the coming weeks. Circuit Judge Casey Manning appears to have already decided there will be some prison time because he remanded Groubert to jail after the hearing.

In Feb. 2015, Jones received a $285,000 settlement for the encounter from the SC Insurance Reserve Fund. He did not speak in court on Monday but is expected to during the forthcoming sentencing.