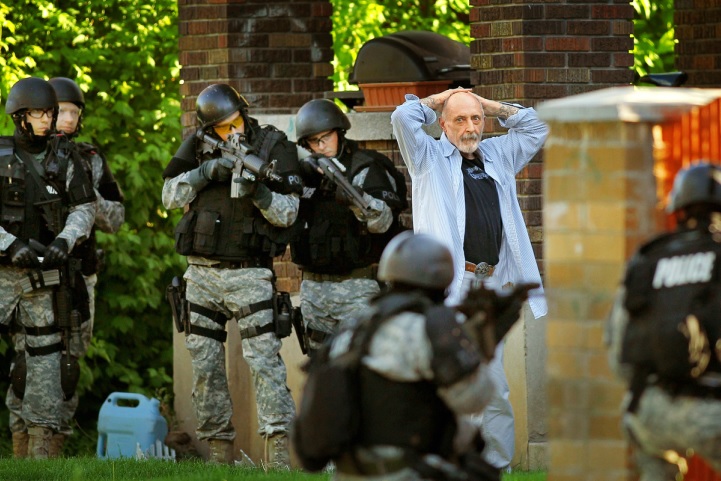 Fort Worth, Texas – a town of about 800,00 people – is about to become the next Boston Manhunt. Residents have already been ordered, at least in part of the outskirts of the city, to stay in their home as officers search for a suspect that shot a police officer.

The manhunt started after officers allegedly attempted to stop a vehicle to search a warrant. According to WFAA:

The shooting occurred after a fugitive team attempted to pull over a car to serve a warrant at Interstate 20 and Hulen Street, said Cpl. Tracey Knight, a spokeswoman with Fort Worth police. Police said the driver sped off and a vehicle pursuit followed. Two suspects bailed from the car and exchanged gunfire with police in the 2800 block of Longvue Avenue.

A suspect and officer were shot in the exchange. The Star-Telegram reports the suspect was pronounced dead at the scene. The second suspect fled into a wooded area and a search is underway.

While my sympathies go out to both of the families (yes, even to the police officer’s because I value all life) that lost loved ones today. That being said, there are plenty of concerns to think of while this unfolds.
.

First, less than 12 hours after the shooting and the police have released the name of the suspect, Ed Russell McIver Jr. While this week alone there have been five incidents involving police where the officer’s name has not been released, many of these act were caught on video too. Including stories from Florida, New York and Texas.
.
Second is the large number of police flocking to the area. In the another video, posted at the same link above, the journalist reports that not only are police dealing with the stress of a fugitive but that of losing a colleague (to injury at this point). While I understand the relation the journalist was attempting to make, this is how you end up with 100’s of bullet holes in boats, buildings burned to the ground and suspects who end up dead instead of captured.
.
While many will say these are dangerous criminals I’ll say what police say all the time, “you have to let the case unfold before passing judgement.” It’s highly suspicious to me that an arrest warrant would be served while a suspect is in transit. This is why many ‘high risk’ warrants are conducted in the early hours of the morning at homes and not while a suspect is mobile with a variety of options.
.
I am not defending the actions of the men who shot at police. I don’t know what that happened. If this turns out to be over a victimless crimes (like drug dealing) than I’ll probably say this is how prohibition brings violence to a business that CAN be done peacefully – just look at Washington and Colorado. Until we have those facts all I’ll say is that we don’t need police trampling people’s rights and bringing all their toys to the streets of Fort Worth. They aren’t there to serve justice even if one of there own has fallen victim to their endless aggression towards people.
.
I’ll update this story as it progresses.
Remember, the Fort Worth police aren’t very popular right now as one of their officers made them look really bad by pepper spraying  a group of bikers. See here.
644
SHARES
FacebookTwitterGoogleRedditTumblr
DiggLinkedinStumbleuponMailPrint
EPN