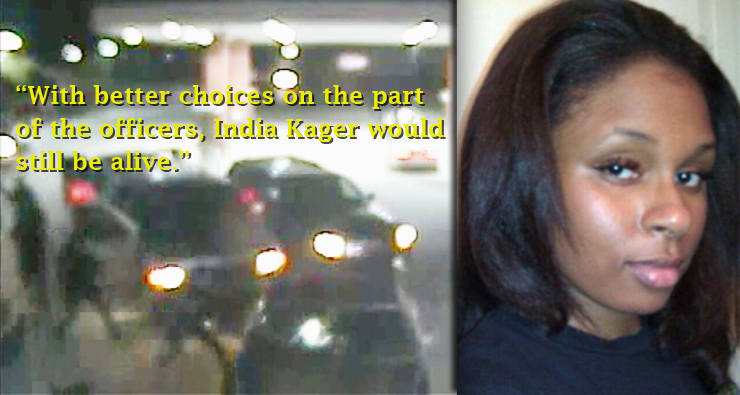 Editor’s Note: This article originally appeared on Crossing the Thin Blue Line, a blog recently started by a veteran police officer who writes under the pseudonym of Ray Isaacs.  From Isaac’s first blog post, Shining a Light: It’s Not Us Vs. Them:

I’ve been a federal police officer for almost 12 years and have been an instructor within my agency for 10 of those years.  I teach several classes, but I cut my teeth teaching Defensive Tactics.  “Defensive Tactics” is PC cop-speak for teaching officers how to defend themselves and make arrests.  In splitting my time between the ideals of the training environment and seeing it played out in real life, it came to my attention that things weren’t acting out the way they were “supposed” to.  Over the years, I’ve noticed some disturbing trends in policing and it has all lead me here.

One of the hardest things in law enforcement is to judge officers on what they did in a shooting incident, after the fact. No one in my profession likes to “Monday morning quarterback” these situations. In fact, we are often told not to, but the time has come to do just that; to take a look at cases and second guess the tactics that officers are using that get them involved in this type of situation. Maybe with a better understanding of how we get to where we are, we can avoid death and injury, not only to the people we are interacting with, but also to ourselves.

In the case of India Kager, it is the options the police took leading up to the shoot that I have some issue with. If you’re unfamiliar with the case, I’ll run through it briefly:

A confidential informant (CI) alerted the Virginia Beach Police that Angelo Perry, India’s boyfriend and father of their child, was responsible for two murders and home invasions. The CI also told them that a “hit” had been ordered on a resident of Virginia Beach. They began surveillance on Perry. Because he was known to have weapons, they asked the SWAT Team to surveill him. They started monitoring him as he was a passenger in the vehicle that India Kager was driving.

Unbeknownst to the officers at the time, their infant son was also in the car. The car began to move erratically and even made a U-turn, leading the surveillance team to believe they had been made. As the car pulled into a 7-11 parking lot, two miles away from the address of the person the “hit” had been ordered on, they decided to take Perry into custody. They blocked the car in with two unmarked, blacked out SUV’s and threw a flash bang grenade at the passenger side door as a distraction. As the officers approached Perry, he shot at them and they returned fire, killing him and also hitting Kager. Despite performing CPR and first aid on Kager, they were unable to save her.

After an investigation, the officers were cleared of criminal wrongdoing.

Let’s talk about the actual shooting and the criminality aspect that the Virginia Commonwealth Attorney investigated. Given what was known to the officers at the exact time of the attempted apprehension, I would agree that there was no criminal wrongdoing by the officers and that it was reasonable for an officer in that situation to return fire. If someone shoots at you, you return fire. It’s that simple. Is it a terrible tragedy that Kager got shot? Yes. It is always heartbreaking when an innocent person loses her life. But what angers me is that even though it is accepted under the letter of the law, this death could have been avoided. With better choices on the part of the officers, India Kager would still be alive.

The choice to use SWAT to conduct the surveillance is strange to me. I can see them helping or standing by in case things get out of control, but for them to be conducting the surveillance doesn’t make sense. SWAT has a different set of training, a different mindset. They charge into dangerous situations using manpower and force to take control. There is a time and place where that works very well, but I’m not sure that works for a traffic stop. Instead of charging in, staying behind the cover of a car and ordering a subject out to make the apprehension is safer for the officers. It also makes it obvious to the person in the car know that the police are there and they are taking you into custody.

What happened in this situation is that two unmarked, blacked out SUVs pulled into the 7-11 parking lot behind Kager’s car. They didn’t have their emergency lights on and they blocked the car in. Yes, the officers were wearing vests with “POLICE” marked on them and they were yelling “police,” but could Perry see that or hear them? Did anyone in the car realize that it was actually police officers coming after them?

A flash bang grenade just went off by Perry’s door. These grenades are designed to disorient, so isn’t it reasonable to assume that he was disoriented when people started running up to him with guns out? And why go in so hard knowing there is someone else in the car?

I’ve been saying this for years to my officers: speed kills. All too often, we rush into situations and try to muscle control of it. Instead of rushing in like cowboys, I teach my officers to take a step back and reassess the situation. Make a plan and think about safety for everyone involved. This doesn’t mean don’t act. It takes training to make these decisions quickly, but taking a moment to think before just charging ahead generally leads to better outcomes.

If the officers in Virginia Beach had taken a step back, maybe they would have devised a plan; used emergency lights; provided cover for the officers and not used a flash bang grenade. Speed kills. If the officers took a moment, maybe India Kager and Angelo Perry would be alive today.

Police handcuffs with dubble locks with 2-keys. shows some wear from use.