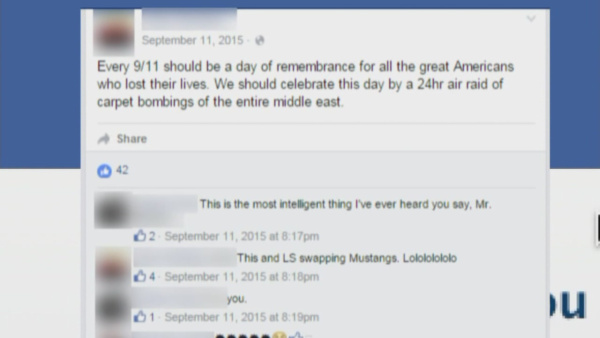 While news outlets are saying ‘reportedly’ when linking the Rio Rancho, New Mexico police officer to the comments on a Facebook page that bares their same, unique, name. I’m going to go out on a limb and say it is and that’s due to the lack of comment by the Chief. Had this person not been a Rio Rancho police employee than they would have stated such immediately. Nevertheless according to KRQE news:

A Rio Rancho Police officer is being accused of writing an inappropriate status and sharing inappropriate pictures that condone violence on Facebook.

A tipster wrote in to KRQE News 13 saying, “I do not think this is appropriate considering that this post was made by a RRPD officer. I swear he targets minorities and especially middle eastern.”

The tip included a screenshot of a Facebook post from September 11, 2015. It reads, “Every 9/11 should be a day of remembrance for all the great Americans who lost their lives. We should celebrate this day by a 24hr air raid of carpet bombings of the entire middle east.”

The post was made by a man whose unique name is the same as a Rio Rancho Police officer’s, whose Facebook says he lives in Rio Rancho and who has shared several police and specifically RRPD posts on Facebook.

“It’s incredibly offensive of course, and deeply racist and disturbing that a police officer would say something like that,” American Civil Liberties Union of New Mexico Policy Director Steve Allen said.

The Facebook page of that man also included a ‘meme’ with a criminal attempting to break into a home with the caption “IT’S A PROVEN FACT THAT CRIMINALS COMMIT LESS CRIME AFTER THEY’VE BEEN SHOT.”

Deputy Chief Paul Rogers said the department can confirm that there is a RRPD officer with the same name as the man who posted the status and pictures on Facebook, but said he cannot confirm that it’s that same officer’s personal Facebook page.

While the trolls are already screaming, “but CopBlock allows comments by people who advocate violence towards cops” let me clarify a few things for you. First, CopBlockers do not swear an oath, nor are they paid by ‘public funds’ and I don’t think anyone (cops or CopBlockers) should be restricted from what they’re able to say. Bringing me to my second point. People forget that freedom of speech means that you can say

whatever you want, it does NOT mean that there will not be reactions, or consequences, to those ‘words.’

While some police and CopBlockers alike have people within their ‘groups’ that advocate violence against people they are doing so as individuals. Just because this Rio Rancho officer wanted to ‘carpet bomb’ Middle Easterners doesn’t bring me to the conclusion that all of their officers do. Yet, that’s what all the trolls say when certain articles have been published here bringing to question the use of force against police (either offensively or defensively).

What is prevalent here is that this officer had the ability to legally enact his hatred and racism. That he wasn’t hiding his feelings and that the police department heads need to take a serious look at the liability this person is to their businesses. And even though this officer put their own department at risk of being looped into a collective stereotype, they’re still protecting his name, withholding information from the public and, if track records are any indication, will most likely give him a slap on the wrist before reinstating him to full duties.

I’ll do my best to keep you updated as details emerge, usually police departments take months to ‘finalize’ their internal investigations so that the findings aren’t an outrage to the public, as they’ve most likely moved onto the next hot news story.